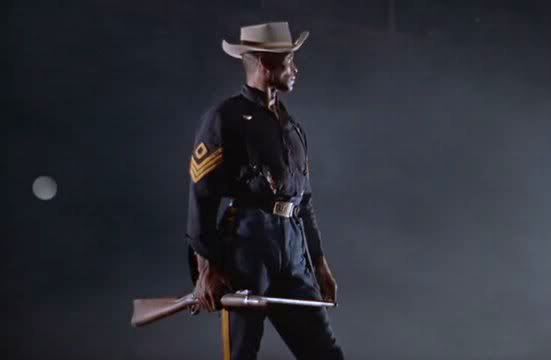 "Said the private to the sergeant, 'Tell me, Sergeant, if you can,
Did you ever see a mountain come a-walking like a man?'
Said the sergeant to the private, 'You're a rookie, ain't you though?
Or else you'd be a-recognizing Captain Buffalo.'"

A few years before he made "Cheyenne Autumn," which was widely perceived as his apology to Native Americans for their barbaric portrayal in his films, director John Ford made another movie that attempted to nudge the Western genre a little closer toward modern sensibilities -- this time on America's treatment of African-Americans.

Released a month before the book "To Kill a Mockingbird" was published and two years before its iconic cinematic adaptation, "Sergeant Rutledge" has surprisingly similar themes and storytelling structure.

It's about a black U.S. Cavalry sergeant played by Woody Strode who is accused of raping and killing a young white girl. The accusations rile up the community in and around the military fort, many of whose members demand an immediate lynching.

As with "Mockingbird," the story is framed around a heroic white protagonist defending him at trial -- in this case Jeffrey Hunter as Lt. Tom Cantrell. All of the film's posters and other publicity materials featured Hunter with Strode in a secondary role, with Constance Towers as Cantrell's love interest often overshadowing the titular character.

It's a well-meaning film that's often a bit stiff and predictable. Rutledge's innocence is never really in doubt, and his exoneration arrives in the last minutes in a twist so out of left field it registers as a deus ex machina resolution.

Still, "Rutledge" actually bests "Mockingbird" in one regard in that 1st Sergeant Braxton Rutledge manages to stand on his own as a flesh-and-blood character, whereas Tom Robinson remains little more than a vessel for racial injustice, a conveyance mechanism for allaying white guilt.

"Rutledge" represents the pinnacle of Strode's unlikely acting career, which was largely defined by his herculean physique and stoic presence. For those who don't know, he was an Olympic decathlete, starred on the same UCLA Bruins football team with Jackie Robinson and was one of the two first black NFL players.

His arresting appearance lent him to many villainous roles -- including famously fighting Tarzan on three occasions. He and Ford remained personally very close from the 1950s onward, and Strode even served as Ford's caretaker during the great director's final years, sleeping for months at a time on his floor.

(An anecdote that only underscores uncomfortable racial power dynamics in some observers' eyes, I'm sure.)

Like other actors who came from the sports/bodybuilding sphere -- Steve Reeves, Arnold Schwarzenegger, etc. -- Strode was not the most subtle or emotive performer around. His career was largely defined by the polarities of intimidating stillness and energetic action -- one often preceding the other. Strode was rarely asked to speak a lot of words or convey a great deal of nonverbal information; his mere presence spoke enough.

His limitations as an actor do pull "Rutledge" down somewhat, particularly during his early scenes where Rutledge rescues Mary Beecher (Towers), a young woman returning to the Arizona frontier after a dozen years away. They're waylaid by Indians at the lonely train depot, and Rutledge is injured while protecting Mary. He strips off his uniform -- why hire a chiseled bod if you're not going to show it off, the thinking must go -- in a scene that is intended to heighten white audiences' discomfort about miscegenation. The whole sequence is just clanky and odd.

Later it's revealed that Rutledge was running AWOL from his post after killing his commanding officer. The officer's teen daughter (Toby Michaels) was found naked and dead next to him, leading to the presumption that Rutledge assaulted and murdered the girl, her father stumbled upon the scene and was killed himself.

Most of the story -- screenplay by James Warner Bellah and Willis Goldbeck -- takes place during Rutledge's court martial trial with flashbacks to the events. Lt. Cantrell, as Rutledge's immediate superior, is charged with defending him while the slimy Capt. Shattuck (Carleton Young) is the bloodthirsty prosecution. Shattuck is ostensibly a cavalryman but is really -- *shudder* -- a career attorney.

The various testimony, including a stint where Cantrell himself takes a turn on the witness stand, establishes that after being captured by Cantrell and his squad, Rutledge heroically defends his fellow buffalo soldiers during skirmishes with Indians. After initially riding off when given the chance, he returns to the ranks to warn the cavalry about an ambush awaiting them.

The other black soldiers of the 9th U.S. Cavalry -- part of the storied Buffalo Soldiers -- absolutely revere Rutledge as the highest-ranking NCO among them, referring to him as "Top Soldier," even after his disgrace. The high point of the film is when the unit, bloodied and fearing further attack, sings to Rutledge as he stands watch over them, likening him to the mythological "Captain Buffalo" who is their ideal and patron saint.

They act as a sort of Greek chorus, not unlike the black townsfolk witnessing Tom's trial from the balcony in "Mockingbird."

Willis Bouchey plays Otis Fosgate, the Cavalry Colonel overseeing the court martial. He's portrayed as a bumptious figure, sneaking gulps of whiskey during the trial and calling for recesses so he and his fellow officers of the court can smoke and play whiskey in the adjoining room. Still, he seems committed to affording Rutledge a fair trial, or at least a fair as one as a black NCO can receive in 1881.

Billie Burke has the comic relief role as Fosgate's wife, Cordelia, a presumptuous old biddy who manages to ensconce herself in the front row during the trial, even after the colonel has ordered the courtroom cleared. The pair seem to be having their own offscreen war going on, with little peeks of how the conflict we see will lead to further contretemps behind closed doors.

The other notable supporting role is Juano Hernandez as Sgt. Matthew Luke Skidmore, the oldest member of the cavalry regiment and the highest-ranking NCO after Rutledge. He leads the reverential lionizing of Rutledge, while being more realistic about his chances for justice. During his testimony it's revealed that Skidmore must be over 70 years of age, though he doesn't know for certain himself, given his birth as a slave.

"Sergeant Rutledge" is a decent film and certainly a well-meaning one, but it's repeatedly undermined by the awkward introduction of humor, seemingly for no other reason than to keep things light, and the intrusion of a completely unnecessary romance. Cantrell and Mary are destined to wind up together, if for only the reason that he repeatedly refers to her as "the most beautiful girl I've ever seen."

Stiff as he is, Strode does get to deliver one great speech as he takes the stand and breaks down about why he ran away twice, and why he chose to return, knowing the almost certain fatal punishment he would face. He calls the Cavalry the only place he's ever felt like more than the freed slave that he is:

"It was because the Ninth Cavalry was my home, my real freedom, and my self-respect, and the way I was deserting it, I wasn't ... nothing worse than a swamp-running nigger, and I ain't that! Do you hear me? I'm a man!"

It's a great moment, and I'm glad Woody Strode got to have at least one like it during his long career.