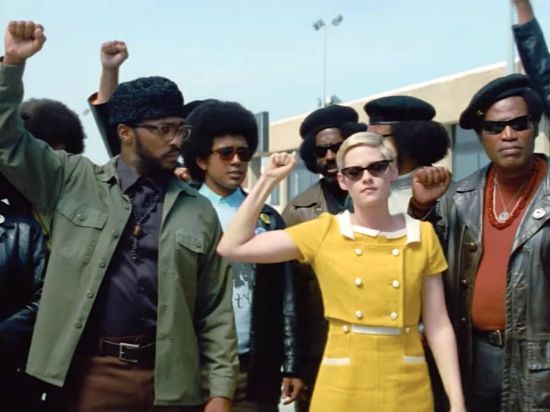 Jean Seberg was an "It Girl" before we really had a name for that. She was a struggling American actress who went overseas and became an overnight success in the French New Wave, with an iconic role in "Breathless."

With her short pixie blonde haircut and torrent of real-life affairs and marriages, Seberg was also on the bleeding edge of the sexual revolution. Her career stalled in the late 1960s and early '70s, and by 1979 she was dead at the age of 40 in an apparent suicide.

Her story has largely been forgotten, but the biopic "Seberg" gives us a fuller telling, including the reason for her disgrace: a vicious and deliberate campaign by the FBI to discredit Seberg for her alliance with the Black Panthers, including her relationship with leader Hakim Jamal.

Kristen Stewart plays Seberg in a nuanced role that reflects her long, slow slide into paranoia and dispiritedness. At the start of the story she is so powerful and independent, driving her expensive sports car into hostile black neighborhoods without any fear of reprisal. She is in command of her own choices.

By the end, she has been withered down to a fearful, spiteful creature who feels very much at the mercy of circumstances beyond her control.

Otto Preminger picked Seberg from obscurity as a teenager to star in "Saint Joan," a traumatic experience both emotionally and physically. She learned to move past her victimhood, using men as they seek to use her.

But then the feds get their hooks into her, for really the slimmest of reasons. It was their (illegal) practice in those days to infiltrate and discredit upstart political organizations that threatened the status quo. Their surveillance of Jamal reveals their affair, and FBI Director J. Edgar Hoover (never seen but felt) seeks to use it to sow dissention among the Panthers.

Jack O'Connell plays Jack Solomon, the young FBI agent put in charge of the case. At first he sees it as part of the job, but comes to resist the hard tactics against a woman choosing her own causes and associations. He eventually takes steps to warn her, though they are not accepted for obvious reasons.

Vince Vaughn plays the mercenary partner, drinking hard and caring little about anything except following orders. His ethos is simple: do the job, reap the rewards. Colm Meaney plays a higher-up who has to crack the whip on Solomon's waffling.

Zazie Beetz plays Dorothy Jamal, Hakim's wife, who can accept a certain amount of philandering from her revolutionary spouse but draws the line at a famous white (in her eyes) dilettante. The women's eventual clash is bone-deep in its impact.

It's a well-acted movie, a slow-burn dramatic thriller than some may need time to warm up to. Director Benedict Andrews and screenwriters Anna Waterhouse and Joe Shrapnel opt for mood and lingering moments over move-the-ball plotting.

My main complaint about the film is it becomes too much the story of a G-man's conflict about participating in a starlet's destruction than the psychological terror she is experiencing. The movie needed to keep the focus on Seberg with Solomon as a tertiary character, but instead the middle section in particular almost feels like "The Lives of Others."

The revelation of the campaign against Seberg was actually revealed by the FBI literally days after her death, and figured into Congressional investigations of the time. her memory was pretty well mislaid after that, until now.

A disclaimer: I saw "Seberg" almost three months ago during the busy runup to the awards cycle. I didn't have time to rewatch it before writing this review, so my recollection for details may have frayed though I think my emotional memory is solid enough to write about it. Do with this information as you will.

Posted by Christopher Lloyd at 3:41 PM