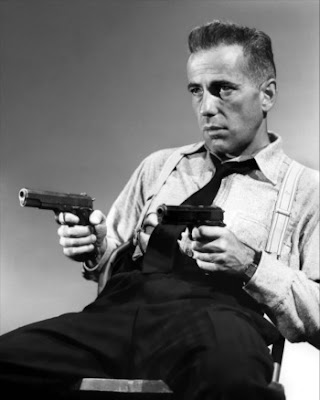 I've seen probably three dozen Humphrey Bogart movies in my lifetime, and no matter what his part in it is, the experience always affects me the same way.

I spend the next couple of days unconsciously talking through my teeth in a fast, low patter. I imagine walking around with a .45 automatic tucked into my belt, and pistol-whipping any wiseguys who ticked me off.

That's the thing about the great iconic stars -- we instinctively want to like them, and be like them.

So what intrigued me while watching 1941's "High Sierra" is why we end up liking Roy "Mad Dog" Earle so much. He is, after all, a hardened killer who slaps people around and guns down innocent people who get in his way. Just released from an Indiana prison on a pardon that was bought and paid for, Roy's a gray and grizzled veteran con man.

Rather than looking to go straight, Roy's only intention is to nail one last big score so he can retire. Big Mac, a dying mob boss, arranged for Roy's release so he can head up a big job to steal half a million in jewels from a California resort. Roy's been given a couple of pinhead small-timers as his wing men (Arthur Kennedy and Alan Curtis) and he's none too happy about it. He also isn't thrilled with having to hole up in a camp up in the mountains, waiting to get the word the job is a go.

So why do we root for Roy, so much so that when the cops are on his tail and he's got a box full of hot jewels, we want him to get away with it?

Perhaps it's Roy's misplaced love for Velma (a 16-year-old Joan Leslie), a poor girl with a club foot he meets along the road to Los Angeles. Velma's grandfather -- played by Henry Travers, forever Clarence the angel from "It's a Wonderful Life" -- takes an instant liking to what he senses is a kindred soul, for Roy used to be just another Midwestern farm boy before he became a notorious gangster.

Roy arranges for Velma to have an operation to fix her foot, which he pays for, with a mind to marry the girl half his age. I think Roy convinces himself he's in love with her, rather than because of any real connection they share. She's goodness incarnate, and he knows he's bad, and maybe he thinks being around her will rub off on him. Velma represents an ideal Roy strives for but can never attain.

The flip side of the female coin is Marie (Ida Lupino -- who actually got top billing over Bogie), a two-bit moll who falls hard for Roy, without getting much of anything in return. She was brought along by one of the two small-time crooks, who fight like dogs over her, until Roy sets them straight and takes the girl under his protective wing.

The other notable player is Pard, a scraggly little mutt who starts following Roy around at the mountain camp. Algernon, the black handyman at the camp, relates that everyone Pard has taken a shine to has died -- which obviously doesn't bode well for Roy. (Willie Best plays Algernon in a shiftless, google-eyed depiction of servitude that is outrageous even by 1941 standards.)

Incidentally, a lot of people have mistakenly thought that Pard was played by the same dog that played Toto in "The Wizard of Oz," but in fact it was Bogart's own pet, Zero. Hopefully the star negotiated a decent contract for his mutt.

The last act of "High Sierra" is the least interesting, as all the little pieces of the Production Code-era morality lesson fall into place.

The two small-timers buy it in a car crash, and the inside man from the resort squeals like a stuck pig, resulting in Roy's mugshot on the cover of every newspaper. Velma, fixed of the problem that saw her labeled a cripple, becomes a party girl who loves to dance and drink. Roy decides to get hitched with Marie as some sort of consolation prize for Velma, and she immediately starts behaving like a whiny rhymes-with-witch.

Their downfall is, of course, the mutt Pard, who gets recognized by a motel manager, putting the cops onto Roy's trail. Roy helps them by stupidly giving Marie all his money so she can take a bus to Las Vegas, forcing him to hold up a drugstore for gas money, which begins a high-speed pursuit that ends with Roy trapped in the high mountains.

Marie, rushing to the media hoopla over public enemy one being cornered, is given away by Pard, who runs barking up to Roy's hideout spot. Hearing the dog, and realizing Marie must be near, Roy comes out from cover long enough to be taken out by a sharpshooter with a scope rifle. Roy's careening fall down the mountain side is pretty graphic for its time.

"High Sierra" was directed by Raoul Walsh from a script by John Huston and W.R. Burnett, based on Burnett's novel. I'm not sure I'd go so far as to label it film noir, especially with all the sunny location shots, but it's an early and above-average example of the hard-boiled heist film.

And, of course, it's got Bogart, doing that unexplainable and inescapably magnetic Bogart thing he does.

3 stars out of four

Posted by Christopher Lloyd at 12:48 AM