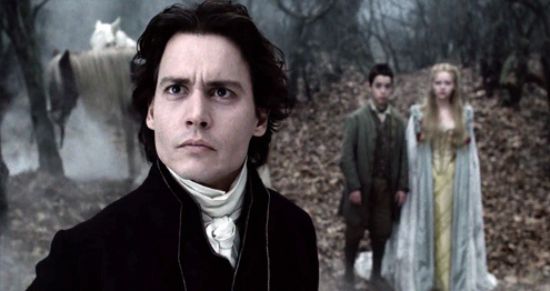 One of the greatest disappointments of my cinematic lifetime is the devolution of Tim Burton.

Along with the Coen brothers, he was at the very top of my list of favorite filmmakers during the 1980s and '90s. Burton made breathtakingly original movies, often combining existing stories or mythologies with elements of horror and twisted comedy to create something that felt at once new and very old: "Beetlejuice," "Batman" and its sequel, "Edward Scissorhands," "Ed Wood," "The Nightmare Before Christmas," and on.

1999's "Sleepy Hollow" seemed to represent the apex, or at least the median, of his career. It was an R-rated, big-budget spectacle that took the legend of the Headless Horseman as a mere jumping-off point for something that was singularly Burtonian. It's hardly his best film but perhaps one closest to the essence of his filmmaking ethos.

Beginning with his next film, 2001's awful "Planet of the Apes," Burton dove over the edge of some boundless abyss. He went from being arguably Hollywood's most original voice to the King of the Crappy Remakes.

"Charlie and the Chocolate Factory," "Dark Shadows," "Dumbo," "Alice in Wonderland," "Dark Shadows," "Miss Peregrine's Home for Peculiar Children" -- it seems there was no moldy intellectual property knocking about that Burton was unwilling to sign onto for a cynical, opportunistic reboot. Most of them made a lot of money, and so we've gotten more of the same.

Meanwhile, on the rare occasion Burton returned briefly to his outsider roots -- "Big Eyes," "Big Fish" -- it's been less of a commercial success.

(Oddly, I split with the Coen boys the same time as Burton, beginning with 2001's "The Man Who Wasn't There." Just as they achieved mainstream success both commercially and with the respect of their peers as expressed through prestigious awards, I've found them afflicted with a case of the dread Serious Filmmakers disease. Only their Westerns, "True Grit" and "The Ballad of Buster Scruggs," have truly pleased me since.)

I haven't watched "Sleepy Hollow" in at least a decade, so given the season I thought it would be a nice visit down pleasant memory lane. Don't think ill of of me, but joining the trip was my youngest, who seems to share my taste for scary movies that the oldest son lacks. Other than one or two fingers-over-eyes moments, he did just fine and enjoyed the movie as much as me, and possibly more.

I must say that today the film's R rating seems rather overburdensome, as it's no bloodier than the "Lord of the Rings" trilogy of the same period. Though I suppose a few lingering closeups of severed necks, along with a general theme that's heavy on the occult, likely tipped the scales toward the harsher rating from the MPAA.

The script by Andrew Kevin Walker -- known for films dallying with perversion, "8MM" and "Se7en" -- combines the Gothic horror aspects of the original story by Washington Irving with a sort of Sherlock Holmes-esque murder-mystery, with a dash of the moralistic musings of "The Scarlet Letter." Here, Irving's fable of a love triangle mixed with local legends of hauntings gives way to a much more complex conspiracy involving most of the town's key figures.

Apologies: just one spoiler warning after more than two decades, so turn back now if you wish to keep the film's secrets to discover yourself.

One last brief aside before we continue: Sleepy Hollow was not actually a town, but merely a glen (neighborhood) of Tarry Town in upstate New York, today called Tarrytown. It originally incorporated in the 19th century as North Tarrytown, but owing to the lingering notoriety and tourist appeal from the story and various cinematic adaptations, changed its name to Sleepy Hollow in 1996.

Sleepy Hollow Cemetery has remained throughout, however, along with the Old Dutch Church referenced in the story. My father-in-law, who grew up in Tarrytown, is buried there (along with Irving) and his service was held at the church.

"Sleepy Hollow" is a magnificent-looking film, shot by cinematographer Emmanuel Lubezki so as to seem leeched of nearly all color, except for some vibrant blood reds and other dashes of hue that stand out in stark relief. The costumes and production design are also sumptuous -- by Colleen Atwood, and Peter Young and Rick Heinrichs, respectively -- and all three received well-deserved Oscar nominations, with the latter winning.

The big joke of the movie is that Ichabod Crane, played by Burton muse Johnny Depp, is not your typical action hero but a squeamish sort prone to fainting and being repelled by blood and dead bodies -- which, of course, he encounters in abundant frequency. Rather than being a visiting schoolmaster vying for the hand of the town rich man's daughter, he is a constable sent from New York City (banished, really) to investigate three recent murders using newfangled scientific techniques and contraptions.

With his milk-pale skin, foppy hair and persnickety mannerisms, Depp's Crane seems like a deliberate rejection of stereotypical Hollywood manhood, and for one I could not be more pleased by it. This more or less began Depp's penchant for highly stylized performances, epitomized by his Willy Wonka and Captain Jack Sparrow from the (seemingly endless) "Pirates of the Caribbean" series.

At first Crane believes the Horseman to be a mere myth, and indeed there's some play on this by local strongman Brom (Casper Van Dien), his chief rival for Katrina's affections, who at one point dresses up as the Horseman and frightens Crane half to death, knocking him out with a flaming pumpkin smashed to the head. (I'd forgotten, but this is actually the event that mostly directly recalls Irving's story.)

Soon Crane becomes convinced the Horseman is real, but being controlled by some local party who possesses his skull and uses this power to assassinate their enemies.

I must confess I'd quite forgotten about all the contretemps with the townsfolk, and even who the true villain turns out to be. It's a messy bit of exposition that never is really clearly spelled out, other than it centers around a local widow who has been impregnated and the various parties -- midwife, doctor, magistrate, notary and several witnesses -- who became embroiled in the scandal.

Katrina is soon revealed to be a witch, though eventually shown to be a good one. In fact, she is just one of a bevy of witches to be revealed in the story. Others include Baltus' second wife, Mary, and her twin sister (both played by Miranda Richardson), and Crane's own mother, seen in flashback by Lisa Marie, who was tortured and murdered by his religious father.

Katrina was presumably taught her craft by her late mother (apparently murdered by Mary), so Baltus had the distinction of wedding not one but two witches.

Other players include Ian McDiarmid as Thomas Lancaster, the town doctor, who is sleeping with the Van Tassel servant, Sarah; James Hardenbrook (Michael Gough), the cowardly banker and keeper of documents; Jeffrey Jones as Rev. Steenwyck, who is secretly dallying with Mary Van Tassel; Samuel Philipse (Richard Griffiths), the local magistrate who buries his guilty conscience in drink; and Marc Pickering as Masbath, a boy whose father is murdered by the Horseman for bearing witness and becomes Crane's stalwart servant.

In perhaps the film's most genuinely terrifying sequence, the horseman is sent to slay the midwife, Killian (Claire Skinner), and ends up killing her husband (Steven Waddington) and young son (Sean Stephens), too. The boy watches his parents murdered through the slats of the floorboards under which he is hiding, and then gets his own axe treatment, too.

(And if there's one part likely to wind up giving my kid nightmares, that's probably it.)

Like a classic Agatha Christie whodunit, the movie is surprisingly loaded with movements of the plot. We soon lose track of which of the townsfolk are doing ill and to whom, and bide our time until the next occasion the Horseman shows up to do some death-dealing.

Done up in all black, variously wielding swords and axes and riding his massive steed Daredevil (apparently undead as well), the Headless Horseman is quite unnerving. He whips about with surprising speed and pinpoint precision, as if able to see perfectly well despite not having a head.

Stuntman-turned-actor Ray Park, best known for playing Darth Maul in the Star Wars franchise, takes over the Horseman for the combat and riding scenes. Rather than doing the usual built-up rig worn up on the shoulders, he performed the entire role wearing a blue ski mask that was digitally removed by Industrial Light & Magic. It's a terrifically effective presence.

Seeing the movie again, I'm reminded that the pacing of "Sleepy Hollow" is not the soundest -- terrific, horrifying action scenes giving way to some rather dull talkie parts in between. But it's the mood that makes it such a spectacular success.

We variously find ourselves laughing, or cringing, or being completely befuddled by what's going on. Some scenes land as straight-up horror, like when Crane and his companions track the Horseman down to his grave at the Tree of the Dead, where he springs forth from the grasping roots, and returns the same way, as if through the dripping gate of Hell itself.

Then we'll have parts, like the Horseman's assault on the Old Dutch Church with the townsfolk trapped in side, where he spears Van Tassel through the heart using a post of the sanctuary fence, which plays more for laughs than cries of fear.

Or both, or one and then the other, or the other way around. I can imagine being in the theater when this film first came out, and I'd bet when this scene came round half the audience was shrieking and the other chortling.

That's the Tim Burton I remember and cherish. Maybe we'll get him back again someday, for good.