Review: "The Devil Has a Name" 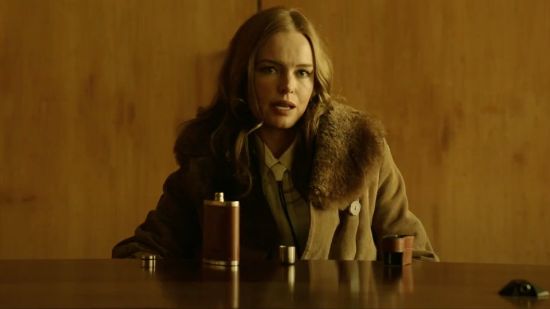 A real head-scratcher, though a fitfully enjoyable one, "The Devil Has a Name" is part Western revenge thriller, part corporate intrigue, part courtroom drama and a little bit exploration of the psychotic mind.

Imagine if Anton Chigurh from "No Country for Old Men" went head-to-head with Daniel Plainview from "There Will Be Blood" in a dispute over oil drilling pollution, and the whole thing wound up in court where Marlene Dietrich was the key figure a la "Witness for the Prosecution," with a bombastic attorney and sniveling media figure tossed in for good measure.

The basic story is an older, small-time California farmer getting muscled by a huge energy company called Shore Oil that has been poisoning the area groundwater for a decade. After he refuses to sell, they bring in their intimidator to try to knock him down, and instead he enlists a crusading lawyer to sue the company for billions.

This screenplay by Robert McEveety is a classic example of too many ingredients in the gumbo. The fact that a lot of them are quite tasty, especially the performances by an eclectic cast of name actors, doesn't mitigate the fact there's just too damn much going on.

I was never bored by "Devil," and enjoyed seeing actors I admire like David Strathairn and Edward James Olmos get meaty parts. But the film -- which Olmos also directed -- feels at once too big and too small for the story it's trying to tell. We get lots of swell little moments but they come and go quickly without a lot of build-up or weight.

This project seems like it would have lived and breathed better as a six- or eight-episode limited series on a streaming service, maybe something juicier and deliberately funnier with a tabloid feel.

Strathairn is the central figure as Fred Stern, who owns a small orchard. He and his wife always dreamed of sailing away together, but she died the previous year and Fred's not much use to anybody these days, letting his foreman and steady friend, Santiago (Olmos), run the show.

Just as some of his trees start to show evidence of polluted water from the nearby dumping ponds, which Shore Oil doesn't even bother to line with protective material, Fred is approached with a strange offer. Alex Gardner (Haley Joel Osment), who worked for him as a kid and now is a small-town TV personality, offers fifty grand for the property.

Reading between the lines, Fred figures he can get more by holding out.

Then into the picture enters Ezekiel, played by Pablo Schreiber in a big, loud, energetic performance that feels like it belongs to entirely another movie. He's the enforcer sent by the Big Boss in Houston to ensure things go smoothly,  but it soon becomes clear he's a completely unhinged, power-hungry type playing to his own off-chord tune -- and is unafraid to resort to violence if it suits him.

His back now up, Fred turns to Ralph Wegis (Martin Sheen), an over-the-hill but still feisty lawyer famous for having once taken Ford down over the Pinto. Ralph found out Ford knew the Pinto had a fatal problem that would take $11 to fix, but calculated it was cheaper to pay lawyers to fight wrongful death claims than save lives, and he figures that's what's going on now with Shore.

Standing at the center of the tale but somehow almost entirely unnecessary to it is Gigi Cutler, who has a family stake in Shore and has been sent to watch over things. Gigi doesn't seem to do much but wear furs and smoke cigarettes and gargle booze while giving everyone a femme fatale stare from hell, but Kate Bosworth is obviously having a hell of a time doing it.

A framing story has Gigi giving her account to the Big Boss (Alfred Molina) on how things went south, with her about to lose her stake in Shore as a result. Her character has terrific verve but no real interior as written. We're just supposed to admire the puzzle and not bother putting anything together.

Sheen is always reliable in this sort of role as a man who likes the sound of his own voice, and Strathairn gets to show a few empathetic notes as an old-timer who's been eating regret for so long he surprises himself by learning he's eager for a fight.

I also liked Osment, who's struggled to find good roles after a fantastic stretch as a kid actor, playing a fellow who's a natural bootlicker type, a guy who can't lose his moral compass because he was never issued the equipment in the first place. Please keep casting him, Hollywood.

I was half expecting Ezekiel to go full Buffalo Bill from "The Silence of the Lambs," or Gigi to hook up with the lawyer or the journalist or anybody, really. I've been trying to figure out what this movie is, with all its disparate, ill-fitting pieces. I think I've realized it's a dusty soap opera set in the California desert, where anything can happen and just might, even if it doesn't make a lick of sense.