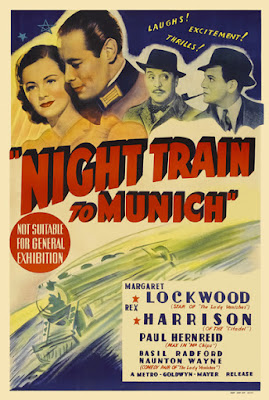 You have to think about the situation in England when "Night Train to Munich" came out in August 1940. Hitler ruled Europe uncontestedly. The Brits had just rescued their remaining forces from France at Dunkirk. The Blitz was about to commence, a year of nightly terror for London dwellers.

The U.K. had been the world's mightiest global empire, now humiliated and (most thought) about to be conquered.

And here is this cheeky romantic comedy caper -- a lark, a piffle, starring Rex Harrison as a supremely self-pleased spy posing as a Nazi to smuggle a brilliant scientist and his daughter out of Germany. Heck, when we first meet Harrison he's singing penny-ante tunes while hocking records at a wharfside shop.

(Although, given Harrison's legendary talk-singing turn in "My Fair Lady," one tends to doubt the mellifluous warbling is his own.)

One can fault the British for their stiff-upper-lip routine, tired classism and tamping down of emotions. But this film, innocuous as it is, represents a massive middle finger waving across the channel at the bloodthirsty huns.

It starts with the German invading Czechoslovakia. Axel Bomasch (James Harcourt) is a scientist working on a formula for armor plating superior to what Germany has. He manages to escape on the last plane out, but his daughter, Anna (Margaret Lockwood), is captured and sent to a concentration camp.

There she meets Karl Marsen, an impudent young man who is nastily beaten by the prison guards for a speech against Nazi brutality. They hang out at the barbed wire line separating the men's and women's section, and a little POW romance starts to bloom. Karl is able to bust them out and get her to England, where she is reunited with papa.

Alas, it has all been a ruse. Karl is secretly an agent of the Gestapo, using Anna to find her father. He snatches them and smuggles them onto a German U-boat.

Paul Henreid plays Karl, and it's a bit disconcerting at first to see him as a Nazi, considering his iconic role is as resistance leader Victor Laszlo in "Casablanca" just three years later. He even sounds different, eschewing Laszlo's deep, sonorous tones for a higher pitch.

Harrison plays Gus Bunnett aka Dickie Randall, the British agent charged with guarding the Bomasches who got one-upped by Karl. He asks to be given a chance to return the favor, as they know the scientist and his daughter will be transported on the titular train.

Dickie is puckish and too clever by half, a confidence man with a charter from the British government. He dresses as a German Corps of Engineer Major, Ulrich Herzog. Using only a forged letter of introduction and his own wits, he bluffs his way past successive layers of the Nazi bureaucracy.

It's funny how, having convinced one German functionary, he actually recruits them to brag on his behalf to the next layer of the hierarchy.

Claiming he had an affair with Anna four years earlier, he worms his way aboard the train with the mission of convincing the scientist to cooperate by the time the arrive. So Herzog/Dickie woos Anna -- partly for show, party for real -- pretends to recruit her father and plays a cat-and-mouse game with Karl, who both harbors suspicions about Herzog and resents him for horning in on Anna.

Butting into the mix is the curious pair of Charters and Caldicott. This is a comedic relief duo first introduced by Alfred Hitchcock in "The Lady Vanishes." Played by Basil Radford and Naunton Wayne, they're British chaps who travel about the globe on some vague sort of business, talking obsessively about cricket and backing up into various goings-on.

They were such a hit with the crowd that various filmmakers started inserting Charters and Caldicott into their movies. They were a staple for about a decade, did some radio and were eventually reprised as a BBC show.

They're funny for a little while, including their introductory stretch where various German officers order them off the train, out of a waiting room, off of wagon, and so on. At first they express indignation, followed by obstinance, inevitably giving way to compliance when large men with guns are called in.

"Night Train to Munich" was directed by Carol Reed ("The Third Man") from a screenplay by Sidney Gilliat and Frank Launder -- the same scribes behind "A LadyVanishes" -- based on a short story by Gordon Wellesley.

It's obviously a low-budget affair, notable for the persistent use of miniatures for exterior shots. The entirety of Karl and Anna's escape from the POW camp is accomplished by tracking across the prison yard to show a barbed wire fence ripped open. It looks little more than a child's model.

Harrison and Lockwood make for an interesting pair. She's a smart and independent woman (by 1940 standards, anyway), and is continually vexed by Dickie's risk-taking and abundance of self-confidence. While he's passing himself off as Major Herzog -- why just a major? why not a colonel? -- he wears a monocle and an even more inflated sense of superiority than he normally does.

At one point he barges into her bedroom while she's abed in her nightie, explaining that he has told the Germans he will reignite her passions based on their previous affair. He calmly explains the situation and proposes they toss for who gets the couch. Pretty risque stuff for that era.

I don't think "Night Train to Munich" is a particularly great film. The story can't seem to decide who to follow. At first it's Anna, then it's Dickie, and for awhile -- too long, really -- Charters and Caldicott are the main show.

Still, I like the idea of this movie more than the one they made. Producing a flip, insolent send-up of the Nazis at a time they were facing the very real possibility of becoming subjugated by them is an act of enormous cheek. Can you imagine what would've happened to everyone involved in the film if the Axis had won?