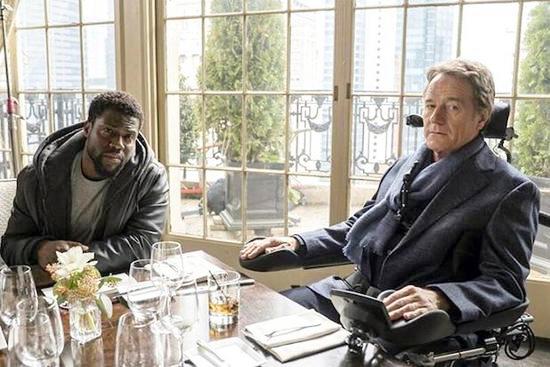 “The Upside” is a film of modest ambitions but obvious charms. It stars Kevin Hart doing his adorable false bravado thing, though with a role boasting more shadings than he’s been given before. And it shows off the under-utilized comedic skills of Bryan Cranston, best known for his dramatic roles. (This despite first coming to fame as a sitcom dad.)

Cranston plays Phillip Lacasse, a billionaire investor-turned-author whose life has been on a downward spiral the last few years, losing his wife to cancer and his mobility to a leisure sport accident. Worse yet, his will to live is at a low ebb, despite the bucking up of his faithful executive, Yvonne (Nicole Kidman), who runs his enterprise and watches out for him.

So when it’s time to hire a new “life auxiliary” -- aka personal assistant -- Yvonne knows right away that Dell Scott (Hart) is all wrong for the job. An ex-con who’s only halfheartedly looking for a job; he says and does all the wrong thing. But he impresses Phillip with his attitude, and lands the gig.

You can probably guess where things go: initial disaster followed by bare competence, which grows into a budding friendship that’s due for a major fracture right at the end of the second act. Director Neil Burger and screenwriter Jon Hartmere play things strictly by the numbers, with story beats and emotional catharsis timed down to the audience-tested minute.

And yet, it works. The trio of main actors share genuine warmth with each other, playing character who each have trouble connecting with the greater world in some way.

“The Upside” is a prototypical laughter-and-tears dramedy, a remake of a better French film. It won’t surprise you, but it will entertain.

Bonus features are middling-to-good. They include deleted scenes, a gag reel and five documentary shorts: “Onscreen Chemistry: Kevin and Bryan,” “Creating a Story of Possibility,” “Bridging Divisions,” “Embracing Divisions” and :Presenting a Different Side of Kevin Hart.”