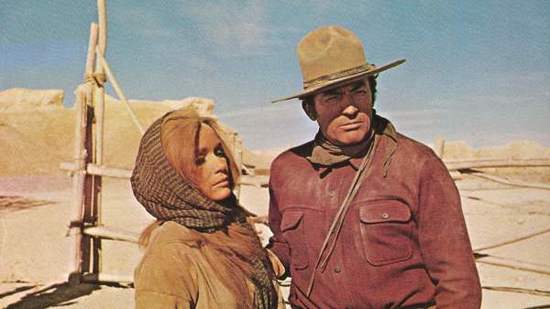 "The  Stalking Moon" is a largely forgotten Western, owing mostly I think to arriving around the time the genre was being reexplored with a more critical eye -- "The Wild Bunch," "Little Big Man," "Butch Cassidy and the Sundance Kid."

But it contains some of those same questioning elements, including a subtle (maybe too subtle) examination of the relationship between an expanding America and the native peoples who were often trampled along the way.

Gregory Peck, a dramatic leading man who occasionally dabbled in cowboys, had been down this path before a decade early in "The Bravados," playing a rancher-turned-killer. Here it's the other way around, portraying Sam Varner, an Army scout helping round up American Indians who tries to settle down but finds his old life pulling him back in.

The first half is more interesting than the second, which oddly plays out almost like a slasher flick as the good guys are hunted by a seemingly unstoppable assailant. It's a rousing bit of Western action, abetted by the novelty of an Indian antagonist who clearly outskills the white hero. But in the end, it's just standard tension-and-release filmmaking.

How the movie got there has more merit.

Getting ready to muster out after 15 years with the Army, where he garnered a reputation as the best of the best, Sam is enticed to escort a white woman, Sarah Carver (Eva Marie Saint), who was kidnapped by Apaches 10 years ago when she was a girl.

(This would put the character in her mid-20s at the oldest, which is a bit of a stretch for the then-44-year-old actress. Peck, at 52, is a little closer to Sam's presumed age.)

Since then she has married and produced a boy of about age 8 (Noland Clay), a "half-breed" or "breed" using the parlance of the film, who has not yet been named in the tradition of his father's folk. After the vestiges of her tribe are captured and she is afforded the opportunity to return home to Columbus -- while the Apache will assumedly be taken to a reservation -- Sarah is desperate to leave right away, guilt-tripping Sam into being their escort.

It's eventually revealed that her husband is none other than Salvaje, a legendary killer feared even by his own people. Salvaje, which roughly translates as "ghost" or "he who is not here," is intent on getting his son back, if only for pride's sake.

Sam intends to put Sarah and her boy on a train and be done with them. But after all the people at a coach station are killed while they were off chasing down the boy during a runaway attempt, he's ready to be quit immediately.

There's a wonderful, largely wordless scene where Sam stares at the woman and her son as they wait at the lonely train station. He knows it's the smart thing to do, but he's also seen the looks and reaction the pair produces in white society and guesses what their future will hold. Carefully weighing matters, coupled with his own longing for stability (read: family), Sam invites them to come live with him at his ranch in New Mexico.

It's a fateful decision, yet knowing what the outcome is we suspect Sam would still make the same choice.

Salvaje soon comes a-knocking, wiping out Sam's new neighbors as well as his oldster caretaker, Ned (Russell Thorson). He's helped for a time by Nick Tana, another "breed" Sam took under his wing a decade earlier and shaped in his image as a scout.

The relationships between Sam and Nick and the boy are the film's most compelling dynamic. Certainly it's more worthy of note than the repressed romance that slowly builds between him and Sarah. Saint really isn't given a whole lot to do, other than sit stoically waiting for the menfolk to do stuff as she speaks in clipped cadences of her nearly forgotten English tongue.

Sam clearly regards Nick as a son, even if he's a somewhat resentful, churlish one. In an early scene Nick throws a knife at Sam's retreating back, clearly a demonstration of the arrival of his full manhood and commensurate independence. He feels like Sam is running away for him, and there is an unspoken hurt that the elder did not invite him to share in his new life.

Maybe Nick would've said no, but he's bothered by the lack of an ask.

All this is barely revealed in the dialogue. A rough caress of Nick's cheek as he dies at Salvaje's hand is all the evidence the film provides.

For his part, the boy largely remains an enigma -- but it's clear that he bears Sam even less regard. He's rebelling at being forced away from his people to live in a white man's world. He tries several times to escape and be reunited with his father. He steals a white man's knife and is tempted to use it on him before Sam intervenes.

Really, the best thing for all concerned would be for the boy to go back to Salvaje and for Sarah to marry Sam and produce another son. But that's not how a mother's love, or Western films, work.

"The Stalking Moon" has impeccable credentials. It's directed by Robert Mulligan, who made "To Kill a Mockingbird" with Peck five years earlier, with a screenplay by renowned scribe Alvin Sargent, who won two Oscars (for "Paper Moon" and "Julia") and found a second 21st-century spurt as the script man behind three of the Spider-Man movies. This was just his second feature film writing credit after starting out in TV.

Based on the novel by Theodore V. Olsen with an adaptation credit to Wendell Mayes, the filmmakers make the curious choice to depict Salvaje as little as possible. He's only glimpsed as a shadow or distant figure until the very end, and he never speaks a single word. His showdown with Sam is shot so as to avoid showing his face or revealing his humanity. It's basically a stuntman role.

I was struck by the musical score by Fred Karlin, best known for his music for "Westworld" and its sequel. It's more a collection of atonal sounds than melodies, with an oft-repeating discord strummed across a string instrument of some kind used for building tension.

(My ear isn't attuned enough to tell, so I'll take a stab that it's a mandolin, zither or dulcimer.)

Is there a hidden meaning to all this? If so, we're barely given more than a few wind-scattered tracks in the sand to decipher.

My guess is the theme has something to do with Sam facing a reckoning for his transgressions as an Indian hunter. He's reached an age where he wants to let go of that life, and finds that it has a hold on him he can't ignore. Having raised and ultimately rejected a half-Indian child, he is given another chance at fatherhood -- but has to endure a mountain of sacrifice as punishment.

The lack of a real character for Salvaje indicates he's more a remorseless force of history than a full-blooded human being, more existential threat than person.

"The Stalking Moon" is well-made, but seems like a sketch for a grander, grimmer tale the filmmakers weren't ready to tell. After the Peckinpahs and Penns of the world had their say, movies like this were destined to fade away.