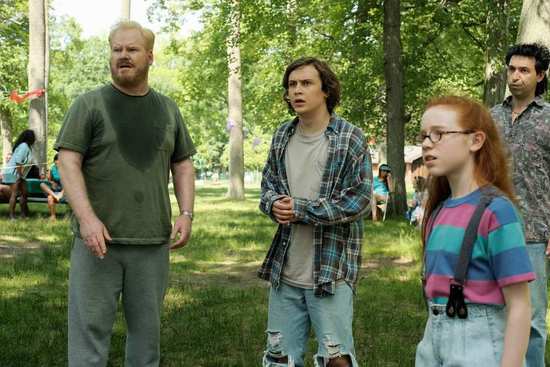 "This isn't some game, Phillip. This is everyone's lives you're playing with."
"Well, lucky for you, you have a spare."


I like the idea of "Being Frank" more than the movie they actually made.

It stars comedian Jim Gaffigan as a guy who has two different families -- distinct homes, wives, pairs of his-and-her offspring. Then one of his kids finds out and they spend the rest of the flick trying to contain the situation, after a little light extortion.

It's a broad sitcom of a movie, which is OK, along with a few poignant moments that the cast and crew do not seem to know how to handle. It's less deep emotional catharsis than people just standing around staring at each other.

A lot of stand-up comedians have turned into excellent actors, Robin Williams being the obvious example. Gaffigan's done a few supporting roles in dramas and been quite good, like "Chappaquiddick," one of the best films of 2018 than virtually nobody saw.

Here he's very much doing a riff on his stage persona as the inept middle-aged dad who tries to do the right thing but inevitably messes it up. Starting, of course, with falling in love with one woman, Bonnie (Samantha Mathis), after getting engaged to a childhood sweetheart, Laura (Anna Gunn).

Then they both became pregnant around the same time, Frank couldn't bear the thought of being separated from his children, and one lie built upon another. He runs a ketchup company inherited from his dad, and explains the long abscenes with fictional business trips to Japan.

(Hadn't realized they were big consumers of Yankee squished tomaters.)

Of course, you know within the first few minutes where all this is going to end. There's going to be a big confrontation where everybody discovers the truth, with obvious finger-pointing and stammering. "But he... and you... which makes her your...!!"

Director Miranda Bailey and screenwriter Glen Lakin are both feature film first-timers in their roles and, well, it shows. "Being Frank" has television written all over it.

I like Gaffigan's comedy a lot, though his shtick is a bit hard to take for 108 minutes. He doesn't really attempt to act like a man who is trapped and tormented, just mugs for the camera and milks every moment for laughs.

The movie would've been better off doing an overt replication of Gaffigan's standup routine in a fictionalized movie version -- though may be leaving out the Hot Pockets jokes.

Logan Miller is solid as Philip, one of Frank's sons and the real main character. He and Frank constantly clash about his dad's high expectations and Philip's constant failure to achieve them. He can't wait to decamp to New York University and start a music career. But Frank insists he stay close to home at the state college.

Isabelle Phillips plays Kelly, Frank's daughter in his other family. After Philip catches Frank with his other family, he starts hanging around with them, posing as the friend of Richie, Frank's never-seen best friend. As you might guess, Kelly makes moony eyes at Philip, which is somehow sweeter than you'd think it'd be. She has a strong, inquisitive face and seems destined for better material.

Rounding things out are Gage Polchlopek as Eddie, Frank's seemingly perfect football player of another son; Emerson Tate Alexander as Lib, Philip's acerbic younger sister; Danielle Campbell as Allison, a girl Philip is sweet on; Daniel Rasihd as Lewis, Philip's best friend who tags along for funsies; and Alex Karpovsky as Ross, Lewis' stoner uncle who gets recruited to play the ersatz Richie.

It's basically a slamming-doors farce set in the bucolic suburbs. Pivotal conversations are started and then interrupted, people misinterpret what someone has said for something else, and so on.

There are some genuinely funny moments and some interesting pieces in "Being Frank." But I apply the Gene Siskel Test: would you rather have just watched this cast of actors hanging around, eating lunch and chatting? I think I'd rather be there than here.

Posted by Christopher Lloyd at 9:09 PM