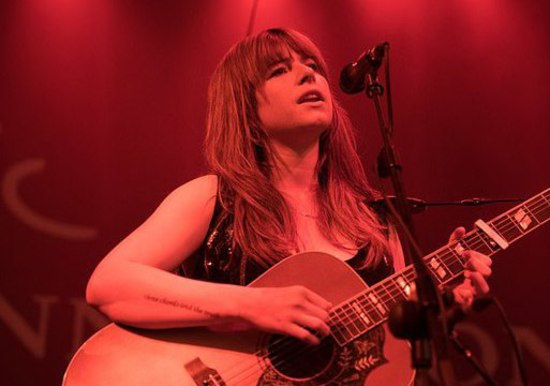 "Why country?"
"Because it's three chords and the truth."


Sometimes a movie sets a beautiful table, knocks you out with a first course, and then the rest of the meal just doesn't sing like the early going did.

I liked a lot of things about "Wild Rose." It stars Jessie Buckley, an Irish actress (playing Scottish here) who was mesmerizing in "Beast" and has a had a few parts in things American audiences might have seen, like the HBO miniseries "Chernobyl." She's got a very raw way of acting, as if there is no filter between her emotions and ours.

Buckley is also very interesting to look at, with a wide lioness face that exists somewhere beyond conventional definitions of attractiveness, like a female version of Michael Shannon. You can't take your eyes off her.

The film has a novel premise: a youngish Scottish woman dreams of making it to Nashville and breaking out in the country music business. (Don't you dare call it country-and-western.) She's spent the last 10 years or so eking out a small following at the Grand Ole Opry of Glasgow, which I bet you didn't know was a thing.

Americans are so inundated with the conventional wisdom that everybody hates us we forget that most people in other parts of the world want to be us.

So fellows spitting out nearly indecipherable highland brogue put on embroidered shirts, boots and cowboy hats and boot-scoot it around the saloon in imitation/reverence of the Western ethos.

(Speaking of speaking: I wish the folks distributing this film had gone ahead and provided subtitles. Peoples divided by a common language and all that.)

As the story opens Rose-Lynn Harlan has spent the last year in prison on drug charges. She's eager to get back on stage; the opry management, less so. Her mother (the great Julie Walters) has been watching after her kids, ages 8 and 5 or so. She thinks Rose-Lynn should hang up her dreams of being a professional singer, get to work like she did and focus her energies on her kids.

This conflict forms the central, and really only, dynamic in the story.

Screenwriter Nicole Taylor and director Tom Harper balance these two values, showing the worth of both but also the pitfalls. If Rose-Lynn is to chase her dreams that means taking risks, long absences and leaving her children with others. If she settles into a secure maternal role, she'll be unhappy and hqf3 shown her kids a model of people giving up.

A potential solution presents itself: while working as a maid (the Brits call it "day woman") for a wealthy couple, Rose-Lynn suggests her employer, Susannah (Sophie Okonedo) simply give her the few thousand quid she'd need to get to the States. From her perspective, Susannah is spending all her money on bottled water and other fancy stuff she doesn't really need. That doesn't go over so well, but a bond starts to form.

Rich people have connections: someone knows someone who knows Bob Harris, the legendary BBC broadcaster who likes country music. Maybe an introduction could be made? Or Susannah could recruit her fellow well-heeled sorts for a fundraising concert.

I won't give anything away of where the story ends up, though you can guess early on this is one of those "the journey is more important than the destination" type of tales.

That's well and good, but to sustain our interest the journey has to actually cover some mileage, either geographically or emotionally. This one seems to spin round and round on the same tired track.

The scenes between Buckley and Walters are fearsomely good, until they start repeating themselves. The interactions with the kids similarly find a groove that quickly becomes a rut.

Buckley appears to do her own singing, and she's terrific. She does a good imitation of female country singers, who often mix girly sweetness with big, audacious howls of pain and regret. It's mostly covers, though Rose-Lynn eventually gets around to writing some of her own stuff. Jack Arnold wrote the tunes.

Countless young people have struck out from their homes to pursue their dreams, with the locale depending on what those dreams are: Hollywood, New York, Paris, etc. The sad truth is very few make it. They end up waiting tables or surviving as a background player in other people's spotlight. Or they return home, knowing others will see it as a defeat.

In the end "Wild Rose" is a fairly conventional tale, aside from the exotic setting.