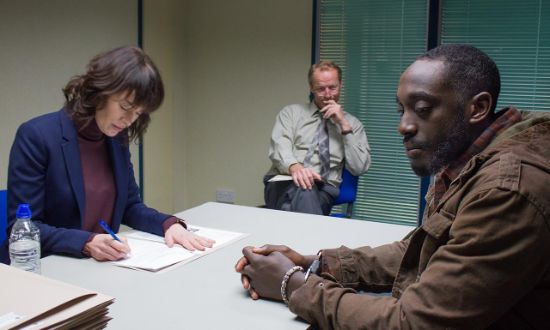 "The Flood" is a gut-wrenching tale with real-world urgency: the deluge of refugees fleeing oppressed areas of the world for the safe(r) havens of the West. We're very familiar with the issue here in America, focusing on our porous southern borders (with less attention given to the broken visa system).

Lena Headey ("Game of Thrones") plays Wendy, a tough immigration officer charged with interviewing people who have entered England illegally to see if they qualify for refugee status and are allowed to stay, or are shipped back to their home countries where they face dire consequences. The fix is in -- the vast majority of cases are rejected, and it's Wendy's job to make the case against them.

She's a workaholic and an alcoholic, struggling through a nasty divorce and making pathetic pleas to her estranged husband at all hours. At one point Wendy calls at 3 in the morning and demands to talk to her young daughter. We feel pity for her, but also not a little revulsion -- we can see how a tough job has hardened her skin, and her heart.

It's a good performance that's as tight as a snare drum. But really, the story isn't hers.

That belongs to Ivanno Jeremiah as Haile, a former soldier from Eritrea. He was arrested after jumping out of the back of a lorry (what we'd call a semi-truck), wielding a knife and knocking over a police officer. The story has caused a sensation in the press and Wendy's boss, Iain Glen (also from GoT), is under heavy pressure from above to see Haile deported as quickly as possible.

Trouble is, his story has the ring of truth. Director Anthony Woodley and screenwriter Helen Kingston adroitly cut back and forth between the interview and flashbacks to Haile's arduous journey.

The man is noble and honest -- to a fault. Asked if he has ever been charged with a crime, he truthfully answers yes. Except it was for pretending to execute a man in cold blood. For this he was tortured, with skin on the soles of his feet flayed off. He still walks with an unsure gait.

Haile makes it to Italy, but only after the flimsy boat used to cross the sea sank, presumably killing everyone but him. The sight of him washing up among their detritus of clothes and life vests is a haunting image.

He winds up in The Jungle, an ad hoc camp for refugees like him. Every once in a while the local authorities raid it and tear it down, but it gets rebuilt even bigger.

Haile meets Faz (Peter Singh) and Reema (Mandip Gill), a married couple from Pakistan who, like him, dream of making it to the U.K. She is pregnant and has family there. They have the resources to buy illegal passage, but use Haile as a middleman because the Afghani power broker (Arsher Ali) despises Pakistanis.

Things go from there. There's a lot of tension, not just from the nature of Haile's trip but in the way it registers with Wendy. She clearly senses he's a worthy candidate for refugee status, but knows where her duty lies.

Sometimes doing the right thing is not the same as doing what's expected of you. "The Flood" is a powerful and sobering look at the flow of people hoping for something better, but finding that you can't always escape your problems with a change in locale.

Posted by Christopher Lloyd at 12:45 PM