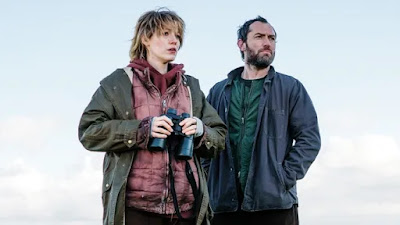 Blake Lively has staked out a nice little film career in a lot of “pretty girl” roles. She was beguiling in the uneven “A Simple Favor” and spent an entire movie in a bikini in “The Shallows.” She takes a very different and bold turn in “The Rhythm Section,” a rather atypical but quite effective take on the spy thriller genre.

She plays Stephanie Patrick, a young prostitute and drug addict who lost her entire family three years earlier in a plane crash – a flight she was supposed to be on herself. Plagued with guilt and self-loathing, Stephanie seems stuck in an inescapable downward spiral until a journalist (Raza Jaffrey) shows up with shocking news: the crash wasn’t an accident but a terrorist bombing that’s been covered up by international intelligence authorities.

This leads her to Boyd (Jude Law), a reclusive ex-MI6 agent. He instructs her about the mysterious unidentified mastermind behind the attack, U17, and that he’s planning more. Through intensive tough-(no)-love training, Stephanie is gradually transformed into a capable adversary herself.

One of the things I really liked is that director Reed Morano) and screenwriter (Mark Burnell, adapting his own novel) don’t try to change Stephanie overnight into a superhuman agent in the mold of Bourne or Bond. She still remains very much human, and is capable of being tricked or hurt.

But her will, and her taste for retribution, are unmatched.

It’s Lively’s best role, as she gets to transform both physically and emotionally as Stephanie turns from strung-out dead-ender to a strong woman who finds she has a penchant for the hunt. In a year separated from bigger pictures, this low-key thriller is a gem waiting to be found.

Video extras are solid. They include deleted and extended scenes, and the following making-of documentary shorts:
Movie: