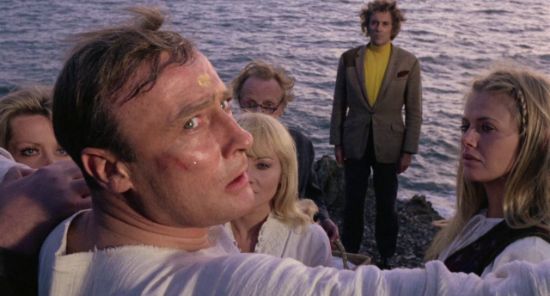 I somehow never got around to seeing "The Wicker Man," even though you'd think it was right up my alley as a kinky/kooky '70s horror flick with a strong cult following. I mean, the man who reveres "Children Shouldn't Play with Dead Things" would have to hold "Wicker" close to his mildewed heart, yes?

It's arguably been overshadowed by the 2006 remake directed by Neil LaBute and starring Nicolas Cage, which despite being a commercial flop has come to be appreciated as part of the "Nic Cage going batshit" oeuvre, of which I am not a devotee.

For me, that sort of thing pretty much peaked around "Vampire's Kiss."

The first thing I was struck by was how musical the 1973 film is, directed by Robin Hardy from a screenplay by Anthony Shaffer, based on the novel "Ritual" by David Pinner. It's virtually a non-stop song, segueing from one piece of music to another driving the story, with certain sung refrains repeated several times.

Mostly it works, though I'll say I could gladly see the end of my days without again encountering, "Corn rigs and barley rigs, and corn rigs are bonny; I'll not forget that happy night, among the rigs with Annie." (Sung by Paul Giovanni, adapted from the song by Robert Burns.)

Many of the songs are overtly sexual in nature, befitting the residents of Summerisle off the west coast of Scotland, who are gleeful phallus-worshiping pagans. It seems the family of noblemen who own/rule the island -- Christopher Lee plays the latest Lord -- stumbled open the old gods as a way to control and motivate the locals, and after more than a century the ploy became part of their culture.

Edward Woodward plays Neil Howie, a police sergeant sent over from the mainland to investigate the disappearance of a 12-year-old girl, Rowan Morrison (Geraldine Cowper). He received this tip in the form of a letter, there apparently not being any phone service to Summerisle, even though they have electricity and modern machinery.

Howie is an ardent Christian, and supposedly a virgin who is engaged to be married. (A bit of a stretch, as Woodward was in his early 40s at the time.) He is put off by the passive belligerence nature of the islanders, who insist they don't recognize a photo of Rowan. Even her own supposed mother (Irene Sunter) disavows ever having such a child.

Consternation gives way to mortification when he encounters their promiscuous ways, with couples openly coupling in the park next to the inn at night, women cavorting nude in the graveyard and similarly unclothed girls performing ritualistic dances at a Stonehedge-like structure in broad daylight. A local shop stocks pickled brains and foreskins along with other gulp-including oddities.

The townsfolk seem genuinely puzzled by the policeman's reaction, since to them Christianity is the moldy old religion and their own beliefs are vibrantly in the present. The Summerisle residents are basically free love hippies in their beliefs, though they speak and dress (when they're dressed) like regular Scottish folk.

This goes on for about an hour of screen time, as Howie continues his investigation despite running into one dead end after another. It gets rather old after while, as the same dynamic -- "I'm so shockingly shocked!" -- repeats over and again.

Certainly the most memorable scene is Howie's first night on the island at the Green Man Inn. The innkeeper, MacGregor (Lindsay Kemp), introduces the sergeant to his daughter, Willow (Britt Ekland), and the entire pub spontaneously launches into a song about how everyone has bedded her. Rather than being affronted, Willow delights in the attention.

That evening she strips off her clothes and begins rhythmically pounding on the walls adjoining Howie's room as yet another musical interlude begins playing to assist her siren's call. The policeman feverishly cringes and moans on the other side, as if his own lust is a spell that he must resist.

The sight of Ekland writhing and dancing to the music is quite... enervating, climaxing with her slapping her own ass several times to the beat. Fairly freaky stuff for 1973.

Interestingly, though Ekland plays the physical part of Willow, Annie Ross supplied her voice and yet another actress, Rachel Verney, dubbed in for a bit of singing.

I'll skip ahead to the spoiler-y part and reveal that Rowan's disappearance is just an elaborate ruse so Howie could be lured to the island and sacrificed to the old gods. It seems their crops failed the previous year, and instead of the usual pigs and chickens a more substantial offering is required to ensure it doesn't happen again.

Of course, this begs the question of why the villagers would strive so hard to bed the sergeant with Willow, since they supposedly need a virgin for the sacrifice.

Lee is quite evidently having a grand old time in this role, which he and screenwriter Shaffer cooked up together as an effort to break out of the cycle of cheap Hammer and similar cheapie horror films he was then trapped in. His Lord Summerisle is effete and haughty, dressing in baroque clothing and making stern pronouncements from on high.

Notably, he does not himself indulge in any of the fleshy delights he continually encourages. At one point he is seen playing music with Miss Rose (Diane Cilento), the school teacher with whom Howie had earlier clashed.

Woodward is quite a stiff neck, though that's the way the part is written. The last bit, where he's placed inside a giant wicker man statue that's set ablaze, raining down psalms and curses with a vigorous spray of rolling Scottish R's, plays as hammy unintended comedy.

Google-eyed character actor Aubrey Morris, best remembered as the conniving Mr. Deltoid from "A Clockwork Orange," turns up as the local gravedigger, constantly sniggering at a joke only he knows.

"The Wicker Man" was the first film directed by Hardy, who would only go on to make two others many years apart: "The Fantasist" in 1986 and 2011's "The Wicker Tree," which shares thematic elements with "Man." It went through several title changes before settling on one to piggyback on nostalgia for the original and then-recent remake. (At one point the title was "Cowboys for Christ," and Hardy published a novelization of his screenplay using this title.)

Reputedly Hardy was trying to crowdsource funding for a third film to complete a haphazard trilogy, but he died in 2016 before it came to fruition. He spent much of the intervening years between his few film projects writing novels, making TV commercials and even helping create historical theme parks.

There's surprisingly little violence in "The Wicker Man" for a horror film -- it doesn't even show Sergeant Howie being consumed by the flames. I think one scene where he beats up the innkeeper to disguise himself in the man's costume is as gruesome as things get.

It's more an intellectual and mood thriller, slowly building up its boiling pot. All in all, Summerisle seems like a pretty good place to live, what with all the free sex and dancing and such. If all such bliss requires is one obdurate policeman burned to a crisp once every century or so, I think many people would call that heaven on earth.

At least, it makes for a slow-moving but delightfully original flick that's still burning up people's imaginations a half-century on.