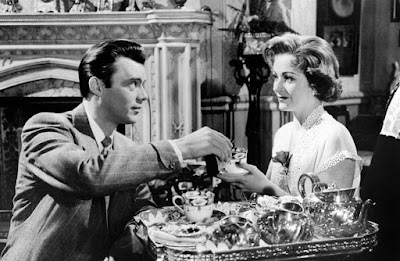 Dirk Bogarde had a certain discreet charm that worked well for him as a British leading man. His enduring image on the screen is of a sleek, well-mannered gentleman of the upper crust, not very large, ramrod straight posture and almost always dressed nattily in a suit or uniform. He could be charming but also icy, and dare I say had a slightly androgynous quality, at least compared to other film actors of his era.

(By fairly reliable accounts he was gay and in a long-term relationship with another man for most of his life, and his failure to enter a show marriage of convenience like others hampered his Hollywood career.)

"Cast a Dark Shadow" is a British film noir that skillfully uses Bogarde's considerable qualities to maximum effect. It’s now out in a terrific new Blu-ray edition from Cohen Media.

He plays Edward Bare, a crafty young manipulator who uses older women for their fortunes. He contrives to kill his wife, Monica (Mona Washbourne), and stage it to look like an accident. He then marries Freda Jeffries (Margaret Lockwood), another wealthy widow, and intends to repeat the crime or otherwise squeeze her for the life of travel and ease he desires.

Dapper -- I don't think he ever appears without a tie, even at breakfast -- and with an impressively vertical pompadour, "Teddy" is slithery and charismatic. In a creepy narrative device, he continues to talk to his dead wife as if she were his conspirator and accomplice rather than victim. His pet name for her was "Moni," which in his soft Cockney accent sounds suspiciously close to "money."

Teddy is clever, and has a way of quickly intuiting the motives of others and bending them to his advantage. He appears always helpful and benevolent to every woman he meets, almost incapable of not flirting, though he is standoffish and borderline rude to other men -- especially Phillip Mortimer (Robert Flemyng), Moni's attorney who (rightfully) suspects that Teddy is after her fortune.

Although he spends so much effort thinking things through, Teddy is very much capable of outsmarting himself, as we'll see.

He seems content to go on living his quiet life with Moni, plying her with brandy and giving "magic carpet" rides by flipping through an album filled with pictures of foreign lands they'll never visit due to her health. (Washbourne was only in her early 50s when the film was made, though I get the sense her character is at least a decade older.) She gives him checks for his little amusements, including a Sunbeam Mk. III convertible he likes to dash around the countryside in, but he craves to be master of his own fate and fortune.

When Teddy hears that Moni plans to make a new will with Phillip, he tries to dissuade her, believing that if she dies with no will he will inherit everything. But he has it backward: she secretly made a will when they got married a year earlier that leaves her mansion to him but her wealth to her estranged sister, herself a widow living in Jamaica.

(So many rich widows!)

Moni intends to change the will to give him everything -- he's successfully devoted himself to her to the extent she genuinely adores him. Plus he claims to have a "wonky ticker" and expects to die before she does. Believing he stands to lose much of what he considers rightfully his, Teddy gets Moni drunk and stages an accident where she appears to have asphyxiated while trying to light the gas fireplace.

If he'd waited until the next day, Teddy would have everything he wanted. Instead, he is left house-rich but cash-poor, confiding that he couldn't write a check for 10 pounds, let alone a thousand. He even contrives to rob Moni's devoted maid, Emmie (Kathleen Harrison), convincing the simple-minded woman that the £200 left to her in the will was supposed to be a lump sum to take care of future wages.

Teddy scrapes together what he has to stake out a posh seaside resort, where he spots Freda and quickly moves in. She is almost the polar opposite of Moni: loud, brassy, lower-class and with a quirk for making inappropriate or crude jokes. But she is also self-confident and self-aware, and though she falls for Teddy and marries him, Freda insists on keeping a tight grasp on her money. She refuses to invest £2,000 in a little real estate investment he proposes to buy a plot next to the town church for a cinema.

"Pound for pound" is her oft-repeated mantra.

He is now in quite a spot. The inquest into Mona's death absolved him, but Philip is still snooping around and the potential to be caught remains. Hurriedly marrying and murdering another woman would look too suspicious. So he sets his eyes on another mark: Charlotte Young (Kay Walsh), yet another wealthy widow (!) who is looking to buy property nearby.

Teddy, a former real estate agent, shows her around while pitching woo and dropping hints about making a mistake by marrying Freda.

Here's the really crazy thing: Teddy makes no effort to hide this from his second wife, and in fact attempts to enlist her aid in the bamboozling. He essentially lets Freda know that he is exactly what everyone says he is, and if she won't festoon him with funds then he'll have to continue his little schemes to secure them.

Freda puts up with all this, a clear-eyed calculation that she would rather have a snake in bed with her than slithering around the back door. There's even a scene where Teddy proposes moving into Moni's old locked-up bedroom and Freda adamantly refuses, saying didn't marry him "for companionship." This is about as close as the movies would get to acknowledging feminine lust in 1955.

Things go on from there, which I'll leave you to discover. The ending is a bit abrupt and stagey, though with some impressive pyrotechnics. There is one big twist involving Charlotte that I admit I did not see coming, and was impressed that Teddy did.

Directed by the great Lewis Gilbert ("Alfie"), "Cast a Dark Shadow" was written by John Cresswell, based on the play "Murder Mistaken" by Janet Green. The cinematography by Jack Asher is sumptuous, blindingly bright sunny scenes outdoors contrasted with inky pools of shadow and darkness inside.

The sitting room where Moni perishes is the centerpiece of the movie, and Gilbert will stage Bogarde in tight closeup in the foreground, much of his face hidden, while other characters wait in the background trying to pierce his conniving, and possibly unhinged, mind.

At 83 minutes, the movie hurries a little too quickly through its plot points for my taste. I would've liked to have more development with Freda, a strong and original female character who's just as interesting and confounding as Teddy. They make a curious pair, two twisted, dominant personalities constantly vying for the upper hand.

I could even envision a third act where the two of them pair up to deceive a succession of old biddies, partners in the art of lovemaking -- and crypt-keeping.

Posted by Christopher Lloyd at 5:30 AM