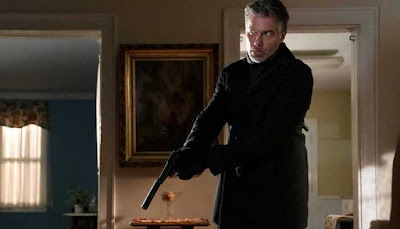 Something was bugging me all throughout watching "The Virtuoso." It's the tale of an assassin trying to reconcile the capricious brutalities of his life while pulling off an especially vexing job in which he's sent to a small town to kill someone -- but he doesn't know who.

Even though the film is engaging and full of plenty of suspense, I couldn't shake the vague feeling that what I was watching was not a movie. A large part of it has to do with the narration, which is done in second-person, present-tense form: "You are very careful. You know never to rush. You always take your time and do not be distracted," etc.

At first what bothered me about the narration is that it's largely unnecessary. As our titular protagonist, a stern-looking fellow of middle years played by Anson Mount, assesses threats and undertakes risks, we can generally see his mind working clearly. For example, at one point he encounters a body in the trunk of a car, so we know that he knows that the person driving that vehicle isn't who they say they are.

Nevertheless, here comes the narrator to solemnly intone, "But if so-and-so is dead in the trunk, then who is the imposter inside the house?"

It's thudding and it's distracting. In movies it's best to lead your audience to where you want them to go, but don't spell it out for them. Show, don't tell. Less is more. It's better to let them be momentarily confused that always feel one step ahead of the characters.

This is filmmaking 101 stuff. And director Nick Stagliano is not a newbie with three previous feature credits under his belt. Screenwriter James C. Wolf is a little greener, but they seem adept at pacing the plot it. So why the damn narrator?

It wasn't until the movie was nearly over I figured it out: it's a video game. Watching the movie is an equivalent experience to having your avatar go through the tricks and tumbles of a role-playing game, with the narrator helpfully providing clues and insights you might have missed.

Should the virtuoso go here and talk to this woman? Or hang back and watch what unfolds? Should he start up his car, or will the taillights give away his position to the enemy? And so on.

It's too bad, because this invasive choose-your-own-adventure warbling keeps getting in the way of a perfectly serviceable story.

The assassin lives in a shack in the woods, totally off the grid and cut off from all communication or human contact. He gets his assignments through notes in a private mail service box, and can pick and choose his jobs.

Sometimes he gets a name, location, details, everything. Other times it's just a few clues, and he has to follow the breadcrumbs to find his mark. His only real connection is with his handler, an enigmatic fellow played by Anthony Hopkins. He's essentially an older version of the virtuoso, and even though they work together they circle each other like wary wolves, affection not giving all the way to trust.

You may wonder why a screen icon like Hopkins is doing in a little potboiler like this, and I can say with a lot of confidence that it's all because of one speech the handler gives in a graveyard scene. I'd bet a steak dinner Hopkins was flipping through that script thinking, "This guy doesn't really do much but sit at his desk and answer one of several phones in front of him," but got to that stem-winder speech and said, "I'll take the part!"

Turns out the handler was a soldier who served with the assassin's father, and has taken on a mentor role now that his old man is passed. Hopkins is frisky and a little scary as a man who knows the dark parts of man's heart, knows that duty requires wandering in there from time to time, but understands how to set it aside and move on to the next mission.

The virtuoso is having trouble with this because his last job went terribly bad, so he wants to jump back into the game so as not to stew over it. His next assignment is a doozie, and the handler suggests he pass on it, but he's resolved.

It involves going to a tiny, tiny town in the woods that seems to consist of just a motel and Rosie's Cafe, a roadside greasy spoon where he is to meet his quarry at exactly 5 o'clock. The hitch: he doesn't know who it is, other than it has something to do with "White Rivers."

He goes to the appointed place and finds several potential threats. There's an older loner (Eddie Marsan) in the corner who's carrying a concealed gun. A handsome dude with a wolf's smile (Richard Brake) who appears to be a boyfriend of a woman (Diora Baird). The assassin is trying to figure out who to kill when a sheriff's deputy (David Morse) strolls in to refuel with coffee and danish. Now what?

He subtly enlists the help of the waitress, Dixy (Abbie Cornish), Rosie's niece who is filling in while her aunt is sick. She takes one look at the steely virtuoso and recognizes a choice pick in an unlikely place, and comes on hard to him. He uses her attraction to his advantage, plumbing her for information to scope out the others. Things go from there.

It's a pretty neat setup, although I have to confess I figured out the twist pretty early on, and I'm guessing you will, too. Still, I was never bored watching it all play out.

Mount is an intriguing figure, a guy who has to practice smiling so he'll pass for a normal citizen. He's not a bad person at heart and the collateral damage that sometimes happens weighs heavily on him. Mount, who sort of resembles George Clooney's harder-hearted cousin, gives the virtuoso a sort of polite distant quality -- a gentlemen with a thousand-yard stare.

There's a lot to like about "The Virtuoso," which plays on the conventions of the killer-among-us shtick while offering enough originality to make it seem like not another cookie-cutter flick. I also appreciated that they didn't gift the assassin with otherworldly fighting skills a la Wick or Bourne, so when he gets into a scrape he gets as good as he gives.

If only they would've nixed that damnable "quest hints" narration...

Posted by Christopher Lloyd at 5:00 AM