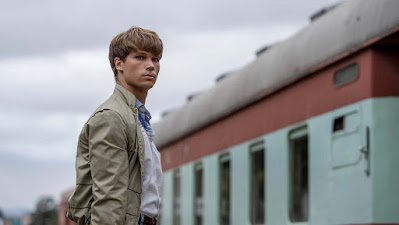 When it comes to momentum in a film, it's always better to start weak and build stronger toward the end than hit your peak early and fade.

Some Old Hollywood soothsayer/huckster said something about all you need is three good scenes and a solid ending, and the audience will forgive a lot of sins. By the same token, if you let the last act of your movie wilt before their eyes, that's all they'll remember.

"Moffie," the story of a sensitive young man serving in the South African military during the height of Apartheid, certainly made a strong early impression on me. But then it fades badly in the last portion, to the point I felt the movie should've just ended after 75 minutes or so.

It's the tale of Nicolas van der Swart (Kai Luke Brümmer), a teenager conscripted for mandatory two-year service in the army, something all able-bodied white youths must do. In 1981, it's a time of rising paranoia about outsiders infiltrating their pure white society -- blacks, communists, heathens, homosexuals, and so on.

Director Oliver Hermanus, who co-wrote the screenplay with Jack Sidey based on the autobiographical books by André Carl van der Merwe, take their time letting us know that Nic is gay. (And closeted, it need not be said, since there really wasn't such as out in that time and place.)

At first he just seems smart and reserved, shying away from the constant horseplay, ragging and conflict the other boys seem to subsist upon. At one point, a hulking bully picks a fight with Nic by stealing a photograph of his father (Michael Kirch) and refusing to give it back, finally agreeing to trade it for a nudie magazine dad had bestowed upon him as a parting gift.

But in time we see the forlorn look on Nic's face as he peers at other recruits, though he's careful not to do so in the open shower room, skinny-dipping breaks or other frequent nude congregations in the movie -- which Hermanus shoots with a loving-bordering-on-lascivious eye.

(The title is South African slang for a homosexual man, though I never heard it used in the film, leaning instead on the tried-and-true "faggot." I suppose that's universal.)

The first portion of the movie has a bit of a "Full Metal Jacket" feel, focusing on the harsh abuse the young men receive at the hands of their sadistic sergeant, Brand (Hilton Pelser). He doesn't seem that much older than the youngsters he's terrorizing, sporting a vaguely Hitler-esque mustache and angry blue eyes.

We've seen this sort of basic training rigamarole before -- doing push-ups until you puke, repeatedly being sent to select the "right" leaf off a tree, marching them miles through the night and then dumping their hot food and coffee on the ground -- but it still hits you in the gut. On top of that, there's all sorts of fascist-leaning talk about blacks and other trod-upons to get your blood boiling.

Nic strikes up a friendship with Sachs, a tousle-headed, easygoing type. They clean rifles together and sing pop songs -- there really isn't anything else to do. There's no romance there, though we see flashes of other recruits being bullied or drummed out of the army after being caught in a bathroom stall together or whatnot. Nic, who's handsome and affable, finds himself picking on a smaller guy (Wynand Ferreira) after he's sent to the mental ward for being gay as a way to cover for his own inclinations.

The real romance arrives fairly late with the figure of Stassen, played by Ryan de Villiers. He looks like he walked straight off the page of a Calvin Klein ad: tall, lean, with thick black hair, quietly appraising eyes and a jawline sharp enough to cut glass. He and Nic share a trench in the middle of the desert, and as they huddle together for warmth we get the barest hint of an attraction, which will continue to grow.

Things come to the clash we expect, but unfortunately at exactly this point the movie wanders away from itself. We get a sudden "eight months later" title on the screen, and spend some time with Nic as his unit is dispatched to some forgotten hellhole where even the base commander sports a beard and doesn't seem to give a shit. Soldiers openly inject morphine to escape from the boredom.

With Stassen's presence gone, Nic's character is relegated to a sort of passive observer, going on patrols and trying to get by. His sexual terror at being discovered gets shifted to the back burner, followed by a terse, unsatisfying ending that leaves us wondering where Nic's life will point him.

"Moffie" has a terrific premise and sensibility, but fails to carry through on them in any kind of satisfying way. Brummer spends a lot of time watching and reacting, and though he's got a winning screen presence the movie just doesn't give him enough to do. Perhaps a narration or journal entries would have allowed us to see more into his mind and soul. Just going by exteriors, Nic comes off as something of a null space.

You never want your protagonist to be the least interesting person on the screen.