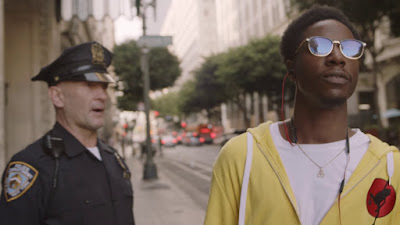 "Two Distant Strangers" is an incredibly compelling film on a familiar, harrowing topic that manages to keep surprising us. Carter (Joey Bada$$) is a young black artist waking up from a one-night stand with Perri (Zaria), a lovely young woman. He's really into her but is also in a rush to get back to tend to his dog. He runs into a white cop, Sergeant Merk (Andrew Howard), who racially profiles him and instantly escalates a harmless encounter into a deadly one. Worse yet, Carter awakes the next morning to find himself back in the same situation. Over and over again, he tries to replay the encounter, but it always ends in his death. Stuck in a mirthless "Groundhog Day" scenario, Carter finally takes a tack of engaging with the police officer as a person, leading to an enlightening conversation on how they see each other across a huge societal divide. A stunning look at a right-now issue that makes us feel and think. Directed by Travon Free and Martin Desmond Roe from a screenplay by Free.

A beautiful, simple story from writer/director Doug Roland. A young man, Tareek (Steven Prescod), has no place to go. He hangs out on the street with some buddies, while texting others for a place to crash. Finally getting lucky, he runs into a strange man standing on the street corner. This is Artie (Robert Tarango). It turns out he is deaf and blind. He communicates by writing on a notepad, and asks Tereek for help getting to the bus. It's late, but he agrees, taking Artie by the hand. A stop at a bodega -- where Tereek pockets $10 from Artie's wallet while buying an iced tea -- makes them miss the bus. Again and again, Tereek has an opportunity to dump this fellow and ease his own path. But he chooses to stay. A little grace inside all of us.

In this tense Palestinian short, a father named Yusef (Saleh Bakri), must travel each day through an Israeli checkpoint to get to his home. It's a humiliating experience, but one he endures stoically. On his wedding anniversary, he takes his young daughter, Yasmine (Mariam Kanji), through to buy groceries. Yusef suffers further humiliation at the hands of the smirking young soldiers, who single him out for for hours of meaningless detention. Eventually they make their way through, and Yusef reveals the surprise of buying a new refrigerator to replace their failing one for his wife, Noor (Mariam Basha). Of course, this means getting through the checkpoint again, and tempers flare to a dangerous point. A poignant and telling tale about human dignity, and what happens when it is trod upon.

An Israeli man (Daniel Gad) who had his expensive white bike stolen last month finds it locked up on the street in a rough part of town. He's sure it's his because of a dent and purple sticker. He calls the police but they say they can't let him take it without filing a complaint or identifying the thief. He's ready to pay a workman 250 shekels to cut the lock when an immigrant from the meat-packing shop next door steps out, claiming the bike is his and he bought it a week earlier. Things escalate, and the Israeli is on the right side of the law for demanding his rights -- but is he on the right side of humanity? A probing look at otherism and alienation.

No often you see a star of Oscar Isaac's caliber in a short film. He plays Richard, a middle-aged guard at a prison who is reassigned to Director of Prisoner Communications, which is a fancy way of saying he reads their mail for any dangerous material. He helps out Jackson (John Douglas Thompson), an older inmate on death row he gets on with, to see about any missing letters from his daughter. Richard becomes entranced with the sensual, moving letters from Rosita to her boyfriend, Cris (Brian Petsos), another man on death row who never talks -- or reads the letters. A surprisingly expansive portrait of one man, as we wade into Richard's own loneliness, with lots of imagery of him eating and drinking by writer/director Elvira Lind, as if he craves sustenance as a replacement for human contact.

Posted by Christopher Lloyd at 10:25 AM