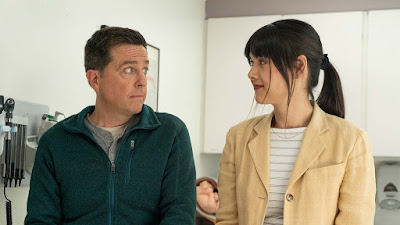 "Together Together" is a sensitive and fairly smart take on modern relationships that at first seems like a fairly predictable flick that gradually gets deeper and more interesting. Writer/director Nikole Beckwith sets us up for the obvious plot movements and then surprises us by continually disdaining the easy or most obvious path.

I guess you'd call it a comedy, and the presence of Ed Helms as one of the two main characters underscores that. He's doing a variation on his Andy Bernard character from "The Office," a well-meaning but rather clueless dude who needs some tutoring in basic human interactions.

He plays Matt, a 45-ish well-to-do app creator who wants to have his own baby but hasn't found the right woman. He settles on a service that connects people like him -- though usually couples -- with young women who will serve as their surrogates and carry the baby they can't. Through this he meets Anna (Patti Harrison), a 26-year-old barista who agrees to fill the role. She's implanted with an embryo created with Matt's sperm and a (anonymous) donor's egg.

The story is that they are supposed to keep things distant and businesslike but find themselves drawn to each other. Matt has an entire book from the surrogate service that gives careful instruction about how to keep things professional, including dictums that he should not ask her about her personal life, or even what she's doing with the money he is paying her.

Anna sees it as a way to make a hunk of money and go back to college to finish her bachelor's degree and pursue a master's, having graduated late from high school because -- wait for it -- she had a baby and put it up for adoption as a teenager. She wants to be cool and above it all but keeps getting roped in by Matt, who's rather glommy in a harmless, awkward sort of way.

We get the clear sense that if Anna just told Matt to eff off and not talk to her until it was time to give birth, he'd go along with it... but be miserable. He wants to be involved in every step of the pregnancy.

Part of their business arrangement is that they talk to a therapist, played by comedienne Tig Nataro, who I would never have thought of as a therapist but seems perfect in the role. They share candy and talk after sessions, which turns into coffee, then lunch, and so on.

Matt is pretty much alone in life, so he doesn't really know how to keep boundaries with Anna. He drops by her coffee shop with "pregnancy tea" or new shoes, and trades icy stares with Jules (Julio Torres), her acerbic, gay coworker.

One of the best running jokes is that Matt created the app "Loner," which is like Tinder in that you scroll through pictures of strangers but never actually connect with them in any way. Jules is a fervent user, acknowledging it's a tool for lonely people to feel connected without the expectations of sex or dating.

Matt and Anna soon are having deep, intimate conversations with each other, the sort of things you only share with a best friend or lover. Will they become lovers? I'm not going to say, because that's really the heart of the movie lies: Can two such different people in a strange arrangement truly create a lasting bond that will endure past the baby's birth? And what form will it take?

This is a movie about asking questions, not providing easy answers.

There's plenty of nice, soft humor and insightful moments. They actually talk about the optics of what the two of them dating would look like, with the comparison to Woody Allen's on- and off-screen relationships as an icky benchmark. They name the baby bump "Lamp," since Anna doesn't want to know its gender and Matt agrees to not learn this himself, since he knows he'd blurt it out.

I liked how the movie has strong, distinct supporting characters, even small walk-on parts like the ultrasound technician (a terrific Sufe Bradshaw) who Matt and Anna see at various stages in the pregnancy. Officially sworn to not insert herself into their relationship, she does so in a subtle yet commanding way.

"I know everything, I'm just not allowed to say it."

Nora Dunn and Fred Melamed turn up for a few scenes as Matt's parents, supportive but exhausting. They hold a baby shower which is really Matt's party, and Anna has to be on display as the surrogate, as invisible as a maid until someone wants to feel the tummy, which is everyone.

I think the movie's weakness is Helm's performance. With a puckish smile or twinkly eye, he seems to continually look to english every moment into the comedy zone, whether it belongs there or not. It's his groove and he strives to stay in it. I've seen him do straight roles quite well such as in the criminally unseen "Chappaquiddick," and I wish Beckwith had nudged him to go a little deeper and not always chase the laugh.

The movie also needed to spend a little more time exploring Anna's backstory. She has a great scene where she talks about her fractured relationship with her parents, who never forgave her for having a baby as a child and then giving it away. Other than a voice message from her mom, the film doesn't pull at that tantalizing story thread any further.

Still, I can report I was never bored during "Together Together" and finished with a feeling of warmth for two people who mean well but don't always say or do the perfect thing. Who among us does?

Posted by Christopher Lloyd at 12:00 PM