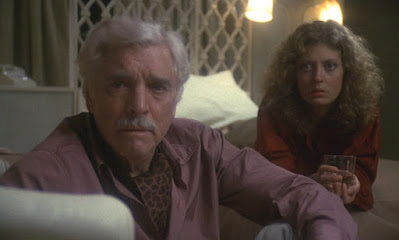 Lou Pascal is a liar. Because he is an older, courtly gentleman played by Burt Lancaster, we do not hold this against him as much as we ought. But a liar he is.

Everyone lies to some extent, and of course the art of film has contrivances, misdirection and outright fabrication at the core of its essence. Every movie lover fell in love with their beautiful lies, including me.

In Louis Malle's "Atlantic City," Lou lies to make himself seem more important than what he is, which is an elderly numbers runner subsisting on the lowest rung of the local underworld. But over time he begins to thrive on the rewards of those lies, most notably money and the attentions of Sally Matthews, the much-younger woman who lives in the apartment next door.

Eventually, Lou falls victim to the worst fate of inveterate liars: he begins to believe his own fibs. Only at the very end of the story, screenplay by John Guare, does Lou finally recognize the depth of his lies and learn to cast them aside.

"Atlantic City" pulled off one of the rarest feats in film notoriety: it was nominated for all of the "Big Five" Academy Awards: best picture, actor, actress, director and screenplay. It also failed to win any of them, becoming one of just eight movies (out of 43 total) to earn all five nominations and take home none of the statuettes.

It's a gorgeous movie whose luster has not waned these past four decades. A beautiful new 40th anniversary Blu-ray edition is out from Paramount this week.

Richard Ciupka's gauzy, sepia-toned cinematography made it seem like a very old movie even when it came out. The eponymous city is a gaudy mix of flashy new casinos and crumbling old beach hotels and tourist traps being gradually torn down to make way for more gambling palaces. It reminds me of the south Florida backdrop of "Harry & Son."

This is a story of love and loss on the boardwalk, as various characters strive and scheme for something better than what they have. Which is ironic, since many of them left their homes to move on up in the seedy seaside gambling town, Las Vegas' crummier East Coast cousin, and got stuck.

Sally is one of them, marrying the first guy who came along to take her out of Moose Jaw, Saskatchewan. Turns out that her husband, Dave (Matthews!), played by Robert Joy, was a petty criminal who soon got them run out of Vegas. Then he ran off with her simple-minded kid sister, Chrissie (Hollis McLaren) and got her pregnant to boot.

Now Sally works the oyster bar at the casino but is studying to become a blackjack dealer, which can earn $20,000 or even $30,000 a year ($60K and $90K in today's dollars). She even harbors dreams of making her way to Monte Carlo to work in the grand casinos there, and is learning French and high-class manners from her gambling teacher (Michel Piccoli), a lecherous older man whose lust stands as counterpoint to Lou's own.

Every night, Sally stands at her kitchen sink limned in soft light, rubbing lemons over her arms and breasts to get rid of the fishy stink of her quotidian trials. And every night, Lou watches her through their opposite windows. He's never actually spoken to her, and in fact she's surprised to later discover he lives next door.

To Lou, Sally represents not just a beautiful woman to desire but a representation of everything he never had or has since lost: youth, romance, wealth, status, reputation, importance. When against all odds he later succeeds in winning her affections, Lou's first thought is to run away with Sally to Miami, where he has lots of friends from the old days.

"I'll buy you new clothes, I'll show you off... just let the boys see how well I turned out," Lou proposes.

Lou passes himself off as an old-school gangster who reveled in Atlantic City's outlaw days, telling a story about taking a swim whenever he'd had a belly full of killing so he  could come out feeling fresh to start all over. He brags that he was Bugsy Siegel's cellmate, and people from Vegas are given his name as the man to know out east.

He counts the late mob leader, Cookie Pinza, as his best friend and himself the trusted guardian of his wife, Grace. Now he stays in the flea-bitten building so he can watch over Grace, who's ensconced in the apartment below as a well-kept invalid. Occasionally, he brags, he throws the old lady a bone by bestowing his affections on her to break up the loneliness, sort of a beneficent silver-haired gigolo.

All these things are not exactly lies, but stand sideways from the truth.

He never killed anybody, but rubbed shoulders with men who did. He only bumped into Bugsy for 10 minutes while in the drunk tank. He was Cookie's lackey, not his friend, and was and still is Grace's servant -- she even has a bell rope strung between their windows so she can fetch Lou to walk her poodle or rub her feet. The real toughguys referred to Lou as "Numbnuts," and his actual name has never meant much.

Lou carefully tends to this ersatz version of himself. Though he lives in a cramped one-room apartment, he meticulously irons his suits and ties, and keeps himself coiffed and "in trim." He makes his daily rounds collecting numbers in the poor section of town for the illegal lottery, where nobody ever wins because, as Fred the bookie (John McCurry) says, "I can't afford winners."

This is enough to keep Lou in cheap whiskey and cigarettes, barely.

Things start to change when Sally's husband shows up in town decked out in hippie garb with Chrissie very pregnant. He has made off with a large stash of cocaine he stole from a dealer drop in Philadelphia, and needs a place to stay until he can turn it into cash.

Falling for Lou's anecdotes about being an old-school player, Dave recruits him to sell the drugs in stages to a man (Al Waxman) running a high-stakes private poker game in a smoky hotel room. Unfortunately, the Philadelphia guys track Dave down and kill him.

Now sitting with $4,000 in cash, Lou gets a head full of ideas. He trades in the numbers game for dealing the rest of the drugs. He buys a ridiculous (even in 1980) peacock white suit and hat, and offers to help Sally with the funeral arrangements, which segues into dates at fancy restaurants (Wallace Shawn is a waiter) and eventually confessing his desiring her and their (offscreen) coupling.

Lou's newfound confidence is shattered when the two drug dealers accost them, slapping Sally around while he is dismissed as a useless old man, not even worth their blows. This is compounded by Grace revealing Lou's true lowly status to Sally.

Completely unmanned, Lou's first instinct is to run away. But something inside pulls him to try and make real the life he's always fancied for himself. He pockets his old .38 snubnose and hits the casino, possibly with the idea of turning his goodly sized stash into a fortune.

When Sally chases him onto a bus out of town, Lou is further embarrassed when she poses as his daughter to get the driver to throw him off, under the ruse he's an addled old man who needs his meds.

"I made love to this woman earlier today! I held her in my arms!" he bellows to everyone, and no one, but mostly to himself, needing that confirmation of his newfound status as a lover and protector.

Things get better for a time, as Lou stands up to the two toughs when they confront them again, gunning them down, stealing their Cadillac and driving off with Sally for Miami. Lou positively revels in the media coverage of the slayings -- even going so far as to brag to the hotel manager that he did the deed.

In the end, Lou's lies finally catch up with him and the reality of a 70-ish man running away with a 30-ish woman asserts its inherent absurdity. He spies Sally stealing most of the money from his wallet, and rather than become angry he lets her go, offering the keys to the car and advice on how to get away.

Lou returns to Atlantic City and his partnership with Grace, who has bonded with Chrissie in a marathon session of foot massages and philosophical musings that feels like it should've taken place 30 minutes earlier in the movie. Things end on a happy note for both Lou and Sally, with her finally having the freedom and wherewithal to do as she pleases, and Lou having found more appropriate companionship, now on a more equal footing.

It's a strangely giddy ending for a film so infused with tragedy and regret.

Sally's redemption is more straightforward, though Lou's needs some proper vantage angles to see all the facets. In Lou's mind, his lies all finally came true -- he's now a killer, a lover of a pretty young thing, with a wad of cash in his pocket and a reputation. Early on Grace goaded him with taunts of being on the law's most-wanted list, and now he really is.

And yet, he knows it won't last. Sally will leave him, sooner or later, so he speeds along that process, for both her and his sake. He is satisfied to return to Grace and his crumbling hometown, passing into history as the city is perpetually torn down and rebuilt -- just like the reputation he so craved.

"Atlantic City" remains a great movie because it's not just the story of a liar, but one who confronts his own lies and finds them unworthy. Lou would rather end as an anonymous old man who is content with what he has than a scrabbler who needs to concoct an ersatz version of himself.

The truth can be hard, but it is always beautiful.