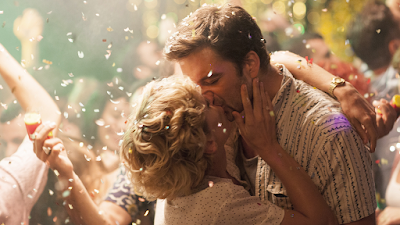 Remember when Justin Timberlake was bringing sexy back? A lot of people wondered at the time exactly where it was that sexy supposedly went. Was there ever a time when sexy was really "out?" All I can say is for those of us who are sexy-deficient, "not sexy" has definitely never been in.

But the movies, or at least American ones, do seem to go through stages of prudishness interrupted by sudden returns to passionate, fleshy, plain ol' sexy filmmaking that feels like a lurch. "Monday" is certainly in that vein.

It's a bold, brash, diverting and yes, absolutely sexy movie starring Sebastian Stan and Denise Gough as an American couple who meet up in Greece and begin a torrid relationship. Gough's a bit of a cypher to most mainstream audiences, though they likely know Stan as Bucky Barnes from the Avengers movies, aka the current titular co-star of Disney+'s "The Falcon and the Winter Soldier."

Let's talk about nudity for a minute. For the prurient among you, I'll not be coy and confirm that in fact, yes, Little Sebastian does make an appearance, and not in the Ben Affleck "Gone Girl" way of bragging beforehand about showing your peen and then it's a three-quarter-turn-misty-shower-did-I-see-it-for-a-split-second-or-was-that-a-reflection-of-linoleum kinda deal.

I can't say as I have any particular enthusiasm for dicks on screen, but by God if you go around bragging about dropping trou then you damn well better whip it out with authority.

I also liked that Gough doesn't do that commonplace cringe-y movie thing of lying in bed after sex with the sheets primly pulled up to her chin. She just lets her boobs hang out, as actual women do. You stare at them for a few seconds, and if you're like me maybe take some pleasure from that, and then you forget about it and pay attention to what she's saying or expressing.

Not showing the boobs makes such scenes more about the boobs than just saying, "Yep, here're my boobs."

The first half of the movie, directed by Argyris Papadimitropoulos from a script he co-wrote with Rob Hayes, is a freewheeling blast. It's a display of sunshine, music, bare skin and a naked lack of inhibition.

Chloe (Gough) is an immigration attorney whose extended stay in Athens is coming to end along with her relationship with a wealthy businessman (Andreas Konstantinou) who turned out to be a heel. She literally bumps into Mickey (Stan) at a party where he's DJing, they're both pretty drunk, and wind up on the beach the next morning unencumbered by clothing.

There's a hilarious and saucy scene where they introduce each other in the back of a police car while wearing handcuffs. Even though there's no hanky-panky going on at this time, it's the sexiest scene in the backseat of a car I can recall since "No Way Out." (Another movie that heralded a brief return of sex to American cinema.)

You'd expect this to be a one-night fling for both of them, but Mickey makes a gallant display of pushing for something more, and Chloe takes him up on it. Soon they've moved in together and things start to get real, which is also unfortunately where the movie takes a sudden, sharp dip in energy.

It turns out they've both got the inevitable hangups. Chloe drinks more than she should and tends to make fatalistic decisions based on single incidents that may not be as big as she thinks. Mickey, though he works hard at playing the smiling carefree playboy, has a strong streak of self-loathing running through him. It's led him to walk away from life's opportunities and responsibilities.

He has a young son he rarely sees, even though he meticulously keeps a room ready for him at his place. And when an old band mate pops up after hitting it big (Dominique Tipper), he's tempted to return to the States with renewed creative passion.

Basically, the first part of the movie is the young, fun bit and the second half is where real life intrudes. I think it's important to the story that Chloe and Mickey are not supposed to be kids. I'd guess they're closer to 40 than 30. That colors their playful antics, which begin to run into dangerous territory, and might even be viewed as more pathetic than unbridled.

Yorgos Pirpassopoulos plays Argyris, Mickey's best Greek friend and fellow hedonist. They do business together and play hard together, and it's hard to tell who is leading who astray. Not a whole lot of other characters clutter the background, though Mickey's ex (Elli Tringou) shows up for a confrontation with Chloe that doesn't go the way we think.

The title comes from a series of title cards that flash throughout the film, always stating "Friday." The implication is that these two people are living out a relationship that is a succession of hot weekends, and the chilly reality of Monday is just around the next turn.

I'm disappointed in where "Monday" wound up. I think the filmmakers had a very strong idea of how to portray the heaving beginnings of a love affair but were as clueless as their characters about how to sustain it through its proverbial middle age.

People tend to think something's sexiest when it's new and fresh, but the bigger challenge is to keep fanning those flames, in movies or otherwise.