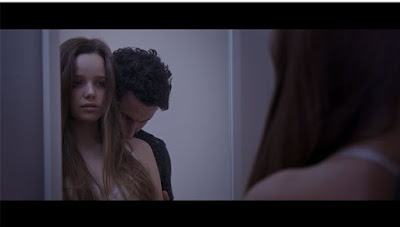 Some movies are good, some are bad, a whole bunch are somewhere in the middle. Then there are those films you watch and someone asks you afterward, "What's it about?", and you honestly don't know how to answer.

"Transference: A Love Story," is helpful enough to give us a big clue right in the title. It is indeed a romance about two nurses working in a London palliative care hospital, both of them immigrants: Katerina (Emilie Sofie Johannese) from Norway and Nik (Raffaello Degruttola). They have a torrid affair, then things go shaky, then splitsville, then... well, you'll see.

Really, what the movie is about is lots of leisurely shots of the stars looking forlorn, often against a cityscape backdrop, possibly with some odd narration by Katerina that somehow uses physics and other scientific principles to comment upon their relationship.

It's weird. It doesn't work. Even slightly. IMDb.com lists its running time as 90 minutes, but the version I watched was closer to two hours. It should be an18-minute short film. Certainly you could communicate everything meaningful in the story in that amount of time.

Nik and Katerina do not seem like a good fit. Everyone tells them so, from her roommate, Camilla (Pernille Broch), to their workmates to... anyone with eyes.

She is 25; he seems close to double that. She is fetching, with long, dark hair and mysterious eyes; he looks like the guy who serves you soup. Katerina has animated facial expressions and seems full of inner turmoil; Nik barely hasn't any animation in his face at all. He's closer to scary than smoldering.

I do not know if Degruttola is a terrible actor or if this was a deliberate choice he made. Probably the latter. He is also the writer/director of the film, and the press notes highlight the fact the story is inspired by his own complicated, real-life relationship with his father, who struggled with bipolar disorder his whole life.

The movie takes until about the halfway point to suggest outright that Nik may have mental health issues. Katerina is the one who comes on to him, which he initially resists since they work in the same place. Soon they plunge full into a passionate (though coyly scanty on skin) affair, including rendezvous at the hospital where people are literally dying in the next room, which is just... ick.

Later on we meet Marieka (Lotte Verbeek), who is Nik's ex. He wants to share news of his new relationship with her, almost as if asking her permission, and she has her own news to relate. A few other characters flit in and out of the background without much impact: another Italian coworker (Iggy Blanco), much younger and better-looking than Nik; the supervising nurse (Bea Watson), who appears even younger than Katerina and is astonishingly clueless about their affair.

Not a lot happens in this movie, and when they do events don't seem to fit with the rest of the story. Nik has an encounter in a bar that turns violent for reasons no one, including him, can figure out. And then, more staring off into space while the music plays.

I still scratch my head thinking about "Transference." It's supposed to be a love story but it's more about mental health challenges. Really, it's about how hard it can be to love someone struggling with a mental health diagnosis. Watching this movie doesn't help anyone.

Posted by Christopher Lloyd at 11:26 AM