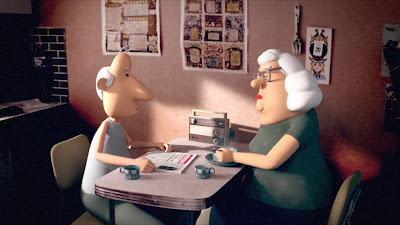 This cute and cuddly short from writer/director Madeline Sharafian follows the adventures of a little bunny eager to build his new home down in the earth. He's pleased with his architectural plans for a single-room dwelling with all the important features labeled ("Bed!" "Table!" "Me!" Disco?"). His joy is quenched when other underground critters burrow into his den while expanding their own -- moles, mice, frogs, salamanders, ants, etc. It turns out their more expansive homes put his to shame, so the rabbit continues to dig deeper until trouble strikes. The wordless animals are anthropomorphic, with little stoves and showers, though I'm not quite sure why they need shovels to dig. A fun and uplifting story about togetherness.

In this surrealist hand-drawn short from France, a young woman has a series of mind-bending journeys. Asked by a neighbor to watch her baby and finish cooking dinner, a spilled glass of water leads to a wash of images and ideas that flow one into the next. She journeys out into the streets and encounters a trio of young toughs who harass her. Some papers blown by the wind become a pair of dogs chasing and playing with each other. A dropped apple vibrates like a cellphone. Lots of imagination here and plenty of visual beauty, though I craved more of a narrative structure. Later our protagonist encounters an organist who espouses cacophonous music -- "just sound, with no meaning." This is the cinematic equivalent.

If Anything Happens I Love You

An absolutely heartbreaking, very simple piece of animation that only uses straight lines in black-and-white, and smatterings of the color blue. A married couple wallow in unhappiness, unable to reach out to or speak to each other. Meanwhile, their shadows come to life and seem to push and pull them toward happier behavior, but are ignored. A damaged patch of their house wall opens up to the story of their life: a daughter, now gone. We see her life unfold, and her shadow also interacts with her parents and pulls them toward away from despair. Quiet, powerful and moving.

Difficult to describe this film -- it's wondrous, perplexing, disheartening, possibly enlightening. There's no story -- just a intricate pyramid diorama that we review from top to bottom, then back up again. Inside are thousands of tiny human figures at work or play, mimicking the sum of all human activity. There is agriculture, industry, marriage, death, religion, politics and so on. A war breaks out between the forces, and when it's over the cycle begins again. Your eye goes this way and that, trying to make out what each little activity portends. I was intrigued but never could really make sense of it.

This quirky Icelandic film looks at the quotidian lives of various people living in and around the same apartment building. There's the old man who shovels snow from the walk for everyone, without thanks. His amorous wife, who loves him but not his penchant for ripping out flatulence. The exuberant music teacher and her teen son, who spends all night playing video games and falls asleep in school. The resentful housewife with whiskey fleas, sneaking a bottle she hides in the kitchen trash, and her corpulent husband, long since emotionally checked out. I'm not sure what it all amounts to, but it's a pleasing though also sobering portrait.

The Snail and the Whale

Posted by Christopher Lloyd at 12:30 PM