Review: "Raya and the Last Dragon" 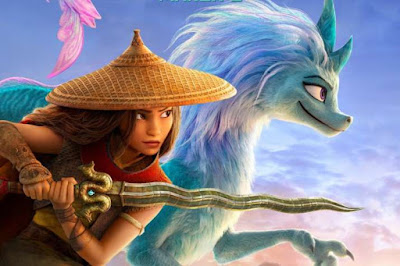 “Raya and the Last Dragon” is bright and light and full of colors and joy -- and also not a little tragedy.

It’s said that all Disney animated movies have a theme, and the one for this film is how people seem incapable of trusting each other unless there’s a huge crisis at hand… and maybe not even then.

The story is set in the fictional Asian land of Kumandra, which was divided into five factions half a millennia ago, a cataclysmic time when the protective dragons all disappeared. It seems the land was riven by terrible creatures called the Druun that feasted on human strife, turning everyone they touched into stone. They’re represented as faceless clouds of purple energy and darkness.

The dragons created a magical gem to banish the Druun, wielded by the water dragon, Sisu (voice of Awkwafina), who disappeared in the final battle. Since then the gem has been guarded by the Heart clan, with wise Benja (Daniel Dae Kim) as their chieftain. As the story opens his teen daughter Raya (Kelly Marie Tran) has just been inducted into the corps of guardians.

Benja thinks the rest of the clans need to come together to reclaim the peace and togetherness that have eluded them. But instead the headstrong chief of Fang clan (Sandra Oh) has her daughter, Namaari (Gemma Chan), befriend Raya and then try to steal the gem. In the melee it is broken into pieces that are spirited off.

Flash forward and Raya, now grown to womanhood, roams a land again infested by the Druun. She still tries to reunite the pieces of the gem, and in doing so awakens the spirit of Sisu. She’s represented as a rainbow-colored serpent in dragon form -- think of those giant Chinese puppets you see at street parades -- and similarly coiffed when in human disguise.

Turns out Sisu is not some all-powerful avatar, but a bit goofy and by her own admission “not the best dragon.” Her sense of wonderment is tempered by the firm belief that trust is the foundation of all positive relationships.

The pair sets out to bring the gem back together, again coming into conflict with Namaari and the Fang. There’s also a classic “putting the team together” spirit as they enlist various castoffs to their team. They include Boun (Izaac Wang), a boy who runs a ship/restaurant; Tong (Benedict Wong), a gruff but lonely one-eyed warrior; and Noi (Thalia Tran), a toddler who pulls off all sorts of crazy ninja-inspired heists with her crew of three monkey henchmen.

Tran is terrific in her role, giving Raya equal measures of pluck and grace. Awkwafina’s slightly gravely timbre and surfdude-ish inflections keep Sisu firmly in the comic relief zone rather than being seen as a spiritual guide.

Animation veteran Don Hall co-directs with relative newcomer Carlos López Estrada from a screenplay by rookie Qui Nguyen and Adele Lim (“Crazy Rich Asians”). My take is the script needed a few more rewrites and refocusing on fewer characters, though they clearly identify their emotional beats and land on them solidly.

The movie boasts lots of zippy martial arts action fighting, including Raya’s special extendable scimitar. I also liked her pet friend Tuk Tuk (Alan Tudyk), who sort of resembles a pill bug crossed with a marsupial of some sort. He’s a tiny guy in the early sequence but grows into a massive, gentle companion who also doubles as a spinning steed.

“Raya and the Last Dragon” lands in the middle-good field of Disney animation like “Wreck-It Ralph” and “Big Hero 6.” It probably won’t last long in the memory, but everyone’ll have a good time while the ride lasts.

Posted by Christopher Lloyd at 5:00 AM