Review: "The Falcon and the Winter Soldier" 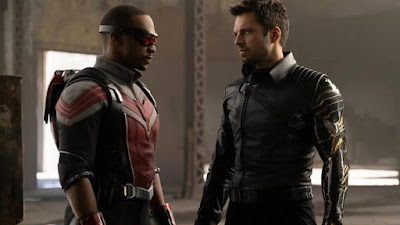 I liked “WandaVision” but was frustrated by its high-concept, deep-backstory approach to bringing the Marvel Comics Universe to the small screen. It took four or five episodes to really get simmering and only kicked into the highest gear for the last couple of episodes.

It reminded me of the second season of “The Walking Dead” — sometimes you just need to get the hell off the farm and start brain-spearing some zombies.

“The Falcon and the Winter Soldier” goes the opposite direction, quickly jumping into a 10-minute, balls-out action sequence within the first 30 seconds. The MCU’s devotion to humanizing its heroes has been its saving grace, so I don’t crave constant chase-chase bang-bang.

But starting with some kapow, and then letting the temperature cool down before building to more heat spikes, seems the wiser choice.

Sam Wilson (Anthony Mackie) aka the Falcon and Bucky Barnes (Sebastian Stan) aka the Winter Soldier have been second-tier figures in the Avengers cycle, but with plenty of complicated history and trauma. Now they get a chance to explore their pasts and current relationships in this six-episode run, all directed by TV veteran Kari Skogland (“The Handmaid’s Tale”), in what is surely shaping up to be a multi-season venture.

Disney+ is only showing us the first episode for now (which debuts Friday March 19), but based on the early going we’re in for a showboating ride with plenty of action but enough time and space for meaty character-building.

Preview looks have been compared to a cheeky buddy-cop spin, though the pair — who faced off in the movies — don’t actually even meet up in the first outing. It appears the central conflict will center around the Flag-Smashers, a multinational terrorist consortium (think Antifa meets Proud Boys) that thinks things were better during the 5-year “blip” when Thanos turned half the world’s population to black ash.

Sam’s working with the Air Force to smoke them out, and gets the opening honors in a daredevil airborne chase involving planes, helicopters, missiles and acrobat parachuters. He’s having doubts, though, about taking up the mantle of Captain America, agreeing to put the iconic shield gifted to him into museum mothballs.

There’s also a sideplot about Sam working with his sister, Sarah (Adepero Oduye), to save the family’s fishing boat and business. This leads to some racially tinged reality about what workaday life is really like for a world-saving hero, especially a Black one.

Meanwhile, Bucky has been pardoned with the condition that he eschew spycraft and violence (right!) and work with a therapist on his nightmares resulting from his decades as the Soviet-brainwashed Winter Soldier. Having lost his best — only, really — friend in Steve Rogers, Bucky’s almost totally on his own, though he has an older Japanese pal. And there’s hint of budding romance with a local barkeep.

Disney reportedly spent $150 million to make six episodes of “Falcon” after shelling out $225 million for nine of “WandaVision,” or an average of $25 million per. So there’s no chintzy special effects or demurring of bringing in other big MCU names for guest spots, including Don Cheadle.

This is full-bore Marvel story arc with all the customary razzle-dazzle and thoughtfulness about connecting pieces to the greater universe. Let’s hope “The Falcon and the Winter Soldier” can sustain this early, promising energy level.

Posted by Christopher Lloyd at 12:30 PM