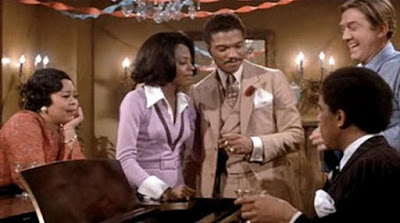 I decided to check out "Lady Sings the Blues" for two reasons: it's out in a gorgeous new Blu-ray edition, and it's the first major biopic of jazz icon Billie Holiday, preceding "The United States vs. Billie Holiday" by nearly 50 years.

I thought Andra Day was terrific in "United States," though the film is somewhat slapdash and takes a lot of liberties with historical fact, up to and including concocting a romance between Holiday and the federal agent who was supposed to be keeping tabs on her.

Turns out "Lady" isn't that much more accurate, despite being based on her own autobiography, co-written with William Dufty. It tracks her fight to the top in painstaking detail, wallows in her drug addiction for the middle and third acts and then skates through the last dozen years or so of her life in hasty order.

It also omits her first two husbands, centering only on the figure of Louis McKay, the part played by Billy Dee Williams. The movie -- screenplay by Suzanne de Passe, Chris Clark, Terence McCloy -- pretends as if he was with her from her very start, when in fact they only knew each other during the last few years of her life.

McKay is depicted in the movie as a slick businessman with some shady aspects who nevertheless acts as Billie's guardian and soulmate. Most accounts say he was really a two-bit louse who sucked money and attention from Billie. He was also reportedly physically and emotionally abusive, a characteristic she unfortunately seemed to share with all of her other relationships.

Williams is in fact the best thing about the movie, and his scenes with Billie usually have a strong emotional tug. He plays McKay as a smooth operator who first sees her as a conquest, but comes to genuinely care for her and becomes invested in being her rescuer when she hits her downward spiral.

Between the domestic violence, opioid addiction and being hounded by the feds -- not to mention being raped as a teenager -- it's no wonder Billie Holiday sang sad songs without equal.

My biggest problem with the movie is Diana Ross in the lead role. Despite earning an Oscar nomination (the film also received four others, including adapted screenplay, art direction, costumes and music), Ross just isn't convincing as Holiday. Certainly she pales in comparison to Day, though I may be biased by having seen the more contemporary performance first.

Holiday's phrasing of lyrics and bending of notes made her sound instantly recognizable. She was influenced by the instrumentals of jazz, and wanted her voice to be able to sound like a sliding trumpet, dithering saxophone or blaring trumpet as the case may be. Her singing style is central to her iconography.

Instead, Diana Ross sings like... Diana Ross. She's a fine singer of course, but coming from a pop background she sounds like a little girl compared to Holiday's resonance. There's no basement in her voice, just the balcony.

I'm reminded of David Oyelowo playing Martin Luther King Jr. in "Selma" and seemingly going out of his way to give his speeches in a manner unlike MLK. Like Billie Holiday, their voices rang out through the ages in a very distinctive way, not just what they said but how they said it. Eschewing that sound is a fatally bad choice.

Ross does a lot of singing in the movie, so every time she opens her mouth we're reminded that we're very much not listening to Billie Holiday. Her stage presence is a pretty good simulation, though, mimicking the stoop-shouldered way Holiday often performed, head bowed as if almost in reverence of her own talent.

The film was directed by Sidney J. Furie, who's had quite a career including some high-toned projects like this and "The Ipcress File" as well as drek such as "Superman IV: The Quest for Peace" and "Iron Eagle" and its sequel. He's continued to make films steadily since the late 1950s and, closing in on age 90, has another one in post-production.

He's got a good feel for the character scenes, though some of them tend to be a little too loose and improvisational, especially in the second half. This is especially prevalent in the scenes with Richard Pryor as Piano Man, Billie's musical usher and intimate friend -- also a purveyor of her "stuff," as she calls her narcotics.

She was initially hooked on drugs via Harry, the smiling, blond-headed white musician played by Paul Hampton who initially encouraged Billie to come out on the road along with his partner, Reg Hanley (James Callahan), who's more of a straight shooter who genuinely loves and respects her because of her talent.

Harry likens the dope to simple medicine, noting that if you get hit by a car the first thing they do when they take you to the hospital is pump you full of morphine. Of course, when the going gets tough and Billie gets hooked, Harry is nowhere to be found.

The film treats Billie's famous 1947 arrest as its framing device, opening with her being thrown into a padded cell to go cold turkey, with the story eventually catching up to that point. There's nothing about the trial or subsequent legal troubles, however, and there's no grand conspiracy to keep her down because of the song "Strange Fruit," an allegory on lynching.

I noticed the songs in the movie tend to be very short, some of them barely a minute. They're the actual famous Billie Holiday tunes, though usually cut down to just a couple of stanzas and the chorus. I often find my attention wandering in musical movies where we keep having to sit through four- or five-minute complete songs -- that certainly was the case with "United States." But I was equally irritated by getting these little sample-sized versions.

In the end, "Lady Sings the Blues" takes the life of a legitimate legend and works hard to distill it down to the usual cliches: artist comes from nothing, displays phenomenal ability, encounters various obstacles combined with personal flaws, and is undone by them. We've seen it in "A Star Is Born" -- all the iterations -- and countless other showbiz stories.

I probably could've swallowed all of that if we actually got a meaningfully close portrayal of Billie Holiday. Instead we get Diana Ross, which ain't bad, but that's something else.