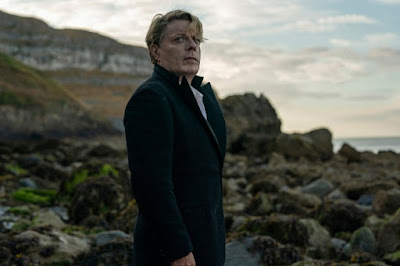 I'm a sucker for World War II movies, especially based-on-true ones like "Six Minutes to Midnight." It was arguably the single most important event in human history, and even today there are still endless tales of unheralded heroism, sacrifice, debasement and tragedy to be told.

Strangely, this spy drama starring Eddie Izzard is curiously flat and lacking emotional appeal. It has an interesting premise: a British school for German girl that becomes a locus of intrigue that could alter the fate of the war. It's got secret agents posing as teachers, double-crosses, intimidating brutes and Dame Judi Dench as the noble but self-deluding head mistress.

Yet I found the movie, directed by Andy Goddard from a screenplay he wrote with Izzard and Celyn Jones, to be predictable and even a tad dull. Izzard's character isn't very well fleshed out, existing as a sort of do-gooding everyman without any history of distinctive personality traits.

He fills out a suit marvelously, but the role is thin as tissue.

(I should mention Dench and fellow Brit acting legend Jim Broadbent receive top billing, though Izzard's the star and main character, as well as serving as executive producer. This film is clearly his baby, yet he takes a lesser credit. Though I suppose just being in the same movie with those two stalwarts must be reward enough.)

As the story opens in summer of 1939, the English teacher at the Augusta Victoria College for Girls at Bexhill-on-Sea on the southern coast of England goes mysteriously missing. We see him being nervously chased about the boardwalk, so we know it's not just the jitters. Thomas Miller (Izzard), a middle-aged widower with a journeyman's history of going from school to school, is hired on a trial basis as replacement by Miss Rocholl (Dench), who runs the college.

Roscholl is a strong adovcate of Anglo-Saxon cultural alliance, and is aware how this looks in the days before the outbreak of a war that seems certain. She informs Miller that a number of the students are daughters of Nazi high command, so discretion is key.

It turns out Miller is a Brit agent who's been sent to ferret out what's going on at the school. He's disturbed to find the young women listening to Hitler broadcasts and even giving the Nazi salute -- with Rocholl and the young teacher, Ilsa (Carla Juri), joining in.

Broadbent turns up, all too briefly, as Charlie, the local bus driver who seems to know more than he ought. James D'Arcy plays the police captain looking into the matter who's unreasonably snotty about it. Jones, the co-screenwriter, plays his brutish corporal, one eyebrow melted in a permanent sneer. David Schofield plays Miller's huffy superior who meets him for clandestine hand-offs of secrets.

One of the film's weaknesses is that the students are never really given strong identities, just acting as a sort of greek's chorus of blonde, apple-cheeked emotional windsock. The only two that really stand out are Maria Dragus as Astrid, the headstrong one even Miller confesses he's a little scared of, and Tijan Marei as Gretel, the smart, timid girl the others pick on.

The movie starts to explore Gretel's relationship with Miller a little bit, with him trying to support her against the bullying. There's even a brief suggestion she might be Jewish, or passing as gentile, though it's soon swept aside for more spy vs. spy stuff.

If the intrigue were more exciting, we might forgive the lack of character development. As it is there's just a vague description of there being a list of British undercover agents being circulated through the school, and that the Nazi commanders intend to bring the girls home before declaring war. I never could quite figure out why the MacGuffin has to be tied to the school -- aren't there hundreds of other ways to transmit the secret list?

Izzard isn't terribly convincing as a secret agent, shortish and stocky with floppy blond locks. Miller does a lot of running in the movie, on the lam from both German and British authorities at different points, though there is one clever bit where he impersonantes a marching band musician.

"Six Minutes to Midnight" doesn't work very well either as a human story or as a spy thriller. It seems like the start of something very good, but a lot of ingredients were left on the counter.

Posted by Christopher Lloyd at 12:32 PM