Review: "The SpongeBob Movie: Sponge on the Run" 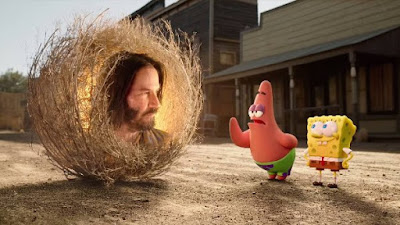 "The SpongeBob Movie: Sponge on the Run" is the first feature film since creator Stephen Hillenburg passed away, and I couldn't help notice this one is markedly kindler and gentler than the previous movies and TV iterations. Even the perpetually scheming evil Plankton is mostly helpful, and crotchety crustacean Mr. Krabs spends a lot more time loving on ol' SpongeBob than berating him.

This is also the first SpongBob movie to use all CGI instead of the traditional flatter-looking 2D animation. The last movie, subtitled "Sponge Out of Water," only employed it for the scenes where SpongeBob and the gang go onto land.

It's definitely a different look, and takes some getting used to for SpongeBob veterans. (As the father of two young boys, I count myself in this group.) I found the fuzz on the head of Sandy Cheeks (voice of Carolyn Lawrence) distracting, and they apparently did a total reboot on King Neptune, now called Poseidon -- although he's still the same vaguely dictatorial big green dude.

But the voice actors are all the same, as is the zany-yet-wholesome feel, and I soon settled in for an enjoyable SpongeBob adventure.

The story is that SpongeBob's longtime pet/pal, Gary the Snail (Tom Kenny, who also does SpongeBob) has been snail-napped by local mad scientist Plankton (Mr. Lawrence) and delivered into the hands of King Poseidon, who uses his snail secretions to keep his 5,000-year-old looks looking their best.

So SpongeBob sets out on a quest to rescue him, with loyal dimwit/best bud Patrick Star (Bill Fagerbakke) in tow, of course. The rest of the gang -- goodly scientist Sandy, restaurateur/money-lover Mr. Krabs (Clancy Brown), cynic/clarinetist Squidward Tentacles (Rodger Bumpass) and even Plankton -- eventually tag along, too.

Their journey will take them to the Lost City of Atlantic City, an underwater metropolis of flashing lights, greed and over-consumption. There's a stopover in the desert (possibly a dream) where we encounter some live humans, including Snoop Dogg as a gambler, Danny Trejo as the dastardly El Diablo and Keanu Reeves as Sage, a wise spirit guide who resides inside a tumbleweed.

I was pleased to see some divergence from the usual SpongeBob plot revolving around Plankton trying to steal the secret formula to the famous Krabbie Patties that SpongeBob spends his life cooking up for the hungry undersea denizens. We've had 20 years of all sorts of superspy contraptions and plots to get his hands on a burger, when all Plankton had to do was hand some kid $20 to go buy him one.

Here the theme is more about loyalty to friends, so Krabs and Plankton set aside their beef (har, har) and get on board the rescue-Gary plot.We also get some flashback scenes to learn how all the major characters met each other, centering on adventures at Kamp Koral in the wayback time when they were kids.

(A new TV series looking at SpongeBob's "Under Years" launches the same day as the movie.)

New character include Otto (Awkwafina), a robot whipped up by Sandy who proves to be less than helpful; Tiffany Haddish as the showstopper emcee in Atlantic City; and Reggie Watts as Poseidon's barely-civil chancellor, doing more babysitting than kowtowing to his monarch.

We get several musical numbers, plenty of slapstick and the usual SpongeBob fascination with bodily fluids, odors and sounds. Straight to the giggle center of my kids' brains. (And mine, too.)

"Sponge on the Run" may not have quite the edge of earlier SpongeBob efforts, but watching it is still a a big, warm and wet hug for the whole family.