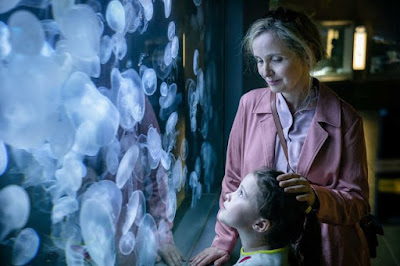 I remember screening "Funny People" some years ago and 80 minutes in I was thinking, "This is one of the best movies I've seen this year." And then the film systematically flushed itself down a toilet in a way I'd never seen.

"My Zoe" doesn't start quite that high or end that low. But still, I was so incredibly engaged by this heartrending drama from writer/director/star Julie Delpy, a look at a fractured marriage that reaches crisis when their young daughter is injured. Then it becomes something completely else. Something that, while it has merits on its own, doesn't belong to the first part.

I'm in a bit of a conundrum on how to review "My Zoe," since I think hearing exactly what the second part is might push people away from giving it a chance, people who maybe won't find the disconnect as jarring as I did.

So the best course seems to write two halves of a review, and give you the option of reading just the first, or the second, or both. Ready? Here goes.

Julie Delpy has been in a lot of movies about relationships, and started making her own some years ago. The French actress is best known in American circles for "Before Sunrise" and its sequels with director Richard Linklater and co-star Ethan Hawke, in which a couple flirt with the beginnings of a relationship.

Now she gives us "My Zoe," a wrenching family drama about a man and wife who are ending their marriage, and their titular daughter becomes another piece of collateral in the acrimonious split.

Isabelle (Delpy) and James (Richard Armitage) are middle-aged and well-to-do, living in Berlin despite coming from France and England, respectively. As the story opens they have recently separated and are working out a joint custody arrangement.

Zoe, played by Sophia Ally, is a bright bundle of 7-year-old joy. She seems not to notice the way her parents subtlety dig at each other during their hand-offs. They constantly talk about "my time" with Zoe as if it is a fungible commodity to be bickered and bartered over. For example, Isabelle insists on accompanying James and Zoe to her soccer game, even though she must soon leave it for work, just because she doesn't want to surrender an allotted hour.

Armitage and Delpy are fantastic together, even though their scenes are hard to watch. We see the years of faded joy and pain etched in their every word and expression. Everything is an exchange of guilt and blame. We might first look unkindly upon her because Isabelle cheated on James with another man (Saleh Bakri), whom she sneaks into her apartment while Zoe is asleep.

But James has major creeper vibes. He's controlling and manipulative, seems incapable of accepting blame, and there's a hint of physical abuse in the past. At one point he refused intimacy for three years, which would drive any person into another's arms. James has a way of encompassing someone in a warm embrace, but we can't help notice his strong hand wrapping the back of their neck.

Things come to a fore when Zoe comes down with a strange malady. Isabelle thinks it's just a simple cold at first, but in the morning the girl won't wake. At the hospital the diagnosis quickly becomes more severe, and there are haunting questions about injuries and harm.

Sitting in the waiting room, James and Isabelle circle each other like wounded animals. They spit insults and question the foundations of their relationship. It seems James wants her back despite all this, but Isabelle has gained strength with her scars.

As Zoe's life hangs in the balance, can her parents ever put aside their hatred for each other to be a family again?

A disconcerting look at the quandaries of science

What would you do if your child was lying brain dead in a hospital, with no hope of recovery? What if you were a scientist who saw a slim but hopeful chance of bringing them back, even if it meant setting aside every ethical standard you'd ever striven for?

That's the quandary of Isabelle (July Delpy), a French immunologist whose life is upturned when her 7-year-old daughter, Zoe (Sophia Ally), suffers a freak accident that results in a brain hematoma. The doctors operate and are optimistic at first, but it soon becomes clear she will never recover. They bring up the aching question of donating her organs so other children in that same hospital will live. What do you do?

Compounding the situation is that her estranged husband, James (Richard Armitage), wants to let Zoe pass. Despite the poisonous end to their relationship, he insists they should reunite in their daughter's memory. But Isabelle won't let go of her daughter -- ever.

She travels to Moscow to consult with a controversial doctor, Thomas Fischer (Daniel Brüh). He's found a way to impregnate women well past the age previously thought possible, and is catering to an international clientele of well-heeled types. But can he clone Zoe?

He refuses, at first. Fischer has been hounded by the scientific community, setting up in Russia to avoid censure and even prosecution. But he's intrigued by the possibility of Isabelle's case, or should I say Zoe's. They initiate a quiet experiment, knowing the chances are low and the risks are high. As scientists, they develop a shorthand of communicating and something like a friendship begins to develop between them.

Fischer's wife, Laura (Gemma Arterton), is ardently opposed to the move. She knows what their family has to lose. But she meets with Isabelle to convey her concerns, and the women end up bonding over their shared experience as mothers. Laura can't help but notice the way Isabelle speaks about Zoe in the present tense. But can a clone really be the same person who was lost?

Eventually, James turns up again for one more try at a reconciliation. He's horrified when he learns what Isabelle is trying to do, seeing it as a theft of his own parenthood. They seem poised to reignite their long war, with their daughter -- or at least her ghost represented as DNA in test tubes -- treated as a prize to be divided.

OK, we're back. Depending on which part(s) you read, those both sound like promising premises. But Delpy turns so sharply from one to the other, we feel whiplashed and discombobulated.

My take is she really wants the movie to be about the second part, but spends the bulk of the movie setting it up so well that she's made another, better story entirely. Like Isabelle and James, the two pieces each have flaws and attributes -- but are utterly incompatible.

Posted by Christopher Lloyd at 3:21 PM