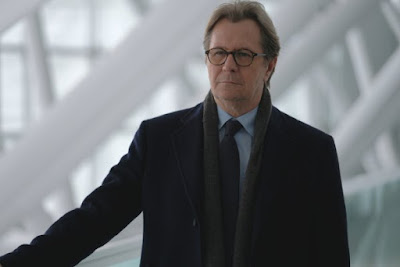 Writer/director Nicholas Jarecki had the idea to make his drama “Crisis” about the opioid epidemic as three parallel storylines. It’s not a new concept, but it can be an effective one when woven together artfully. Instead, the movie feels like three different tales rather than a gripping whole.

Individually, the pieces work. But two of them only intersect very late in the story and the third one… never does.

Armie Hammer plays Jake Kelly, a gruff, hard-charging DEA agent on the verge of a huge bust after spending a year infiltrating himself into the pill-mill trade. Evangeline Lilly is Claire Reimann, a suburban mom distraught over her teenage son’s death from overdose who decides to take matters into her own hands. Gary Oldman plays Tyrone Power, a scientist who’s been signing off on the big pharma’s studies in exchange for funding but undergoes an attack of conscience.

All three of these have enough narrative momentum, not to mention compelling performances, to merit an entire feature film. Together they are less than the sum of their parts.

It’s part cops-and-robbers, part revenge cycle and part corporate intrigue. I’m guessing the notion was to take a look at the opioid crisis from a variety of angles, but we actually see very little of the end effects on the users. Jake’s sister (Lily-Rose Depp) is an addict, which works to stoke his passions, but she only gets a couple of substantive scenes.

Tyrone is a chemistry professor at a small college that relies upon donations from a huge pharmaceutical company to fund his research, with Luke Evans playing the heavy. They believe they’ve stumbled upon a new form of painkiller that isn’t addictive, which will revolutionize the use of opioids -- not to mention rake in billions. But some lab technicians discover that the drug, Klaralon, is killing off their mice test subjects and needs to be pulled for more study.

He decides to go up against the big powers -- including his friend, the college president played by Greg Kinnear -- and progressively gets chewed up.

Claire insists that her son was not actually a drug user, and with a little digging and the help of a private investigator, she believes he was actually murdered rather than overdosed. She travels to Canada to look into the big pill operation behind it, which has recently moved into the even more deadly trade of fentanyl. It’s mentioned, but only lightly explored, that she used to be a user herself.

Meanwhile, Jake has set up his own front clinics where shady doctors dispense prescriptions to dangerous narcotics like candy (they hire homeless to obtain the pills, then immediately buy them back so they’re not putting more drugs on the street). With his new boss (Michelle Rodriguez) putting the pressure on, he has to set up a multimillion-dollar deal between his operation, the Canadian manufacturers and the Armenian distributors.

If that sounds like a lot of characters, that’s because it is. And I haven’t even mentioned the various supporting characters, spouses, friends, henchmen and so on.

I liked all three main actors in their roles. Claire is fragile but determined, Jake glowers so much he seems to positively steam, and Tyrone’s keening, high-minded oratories about doing the right thing pluck the heartstrings. It’s not enough, though.

“Crisis” is an ambitious movie that I think fails because of a lack of bigger ambition. I can imagine this as a trilogy or limited series that gradually sucks us deeper into an international epidemic, with each story showing the full breadth of every side. What we get feels like a CliffsNotes version of something bigger and better.

Posted by Christopher Lloyd at 8:00 AM