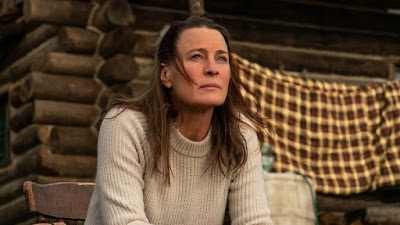 It's hard not to see the similarities between "Land" and "Nomadland." Both are spare, contemplative movies about mature women choosing solitude on the down slope of their life. The obvious difference is that one opts for a life of wandering the open road, whereas here she plunks herself down in a single place to confront her own humanity and take its measure.

Robin Wright stars and directed, her first stint behind the camera of a feature film. It's a bold, brave movie that embraces stillness while eschewing story. At 89 minutes it feels just long enough to burrow its way into your chest, but doesn't tarry overlong or try to overplay big moments.

If movies were speeches, "Land" would be closer to the Gettysburg Address than filibuster: terse, strong, direct.

It's really just a two-character story, with a handful of others that get perhaps a few minutes of screen time each. Wright plays Edee, a woman who has suffered some kind of unnamed tragedy in her life. There are photos of a man and a young boy, and we know instinctively they belong to her. In flashbacks we see her with her sister, Emma (Kim Dickens), who begs her not to hurt herself.

Edee purchases, sight unseen, a cabin in the remotest part of the mountains somewhere out West. This is the sort of place where you have to drive 40 minutes just to get to a tiny town. The place has a majestic view of peaks and valleys, but no electricity, running water or other amenities. It's literally like stepping back into the 1800s: firewood stove, outhouse, etc.

She does not even have a car to get back to civilization, and drops her cellphone in the waste before driving up in a rental. Colt (Brad Leland), the old hoss who handled the sale, warns her not to be trapped up here alone, which Edee ignores.

Things go badly for awhile. She doesn't know how to hunt or fish, and can barely swing an ax to heat her leaking shack. The snows pile in, and her food freezes in the can.

But there's a determination in her eyes. Edee has reached some kind of break point in the arc of her life, and finds she can't be around other people. This new existence, be it interlude or permanent shift, marks the before and after point in her existence.

She gets a hand from Alawa (Sarah Dawn Pledge), a nurse, and Miguel (Demián Bichir), a local who happened to pass by Edee's place while hunting in winter, and noticed the smoke had gone out. They nurse her back to health.

Alawa returns to her job in the city, but Miguel hangs around. He teaches Edee survival skills. Even after she's capable he keeps coming back for visits, as something like a friendship grows.

Without anything being said, we know there is no chance of romance between the two, as a typical movie would feel compelled to explore. (Jesse Chatham and Erin Dignam wrote the original screenplay.) Miguel is patient, asking for nothing, accepting and forgiving her bursts of piano-wire temper.

But gradually, Edee expands her list of people in the world she can stand to be around from zero to one.

The cinematography by Bobby Bukowski is just as good as you'd expect with all that natural beauty as backdrop, filmed around Alberta, Canada. The music, mostly minimalist strings, is by Ben Sollee and the group Time for Three.

"Land" is not the sort of movie to lay out all the answers for us... or even accept that any answers exist. The mystery of Edee's past soon ceases to be a puzzle we want to solve but simply accept as part of this woman who seems both so strong and so fractured.

I'm reminded of other singularly-focused films: "Straight Story," "Cast Away" and, of course, "Nomadland." How amazing it can be when a movie doesn't try to busy things up with lots of characters and places and things happening, but just stares with intent focus at one intriguing person.

That's a satisfying journey in of itself.

Posted by Christopher Lloyd at 12:01 PM