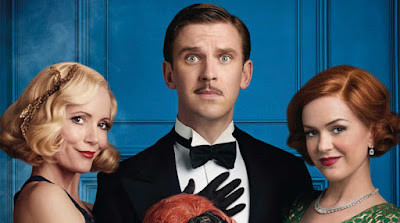 "Blithe Spirit" is one of those odd films that seems to have a lot going for it -- likeable cast of name actors, nifty production values, based on a play by Noël Coward that was previously adapted into a 1945 film starring Rex Harrison -- and yet it all can't save it from being a predictable, boring drip.

Set in 1937, it stars Dan Stevens as Charles Condomine, a successful Brit author who is currently at work on his first film screenplay, hoping to break into Hollywood so he can move there with his American second wife, Ruth (Isla Fisher). But through a series of events he comes to be haunted by the ghost of his first wife, also an American -- now there's trouble! -- named Elvira, (Leslie Mann), who died in a tragic horse riding accident five years earlier.

Only Charles can see and hear her, which leads to several scenes where he gets in trouble for saying terrible things to her which the alive people perceive as being directed at them. That should be a one-off joke, and then a smart guy like Charles would figure out not to be baited. But it gets milked for several more laborious scenes, such as with Ruth's big-shot movie producer father (Simon Kunz).

We've seen a lot of dead-come-to-life movies over the years, and even though this technically was one of the earliest such stories all the jokes are retreads of stuff we've seen before: a piano that seems to play itself, Elvira scaring off the cook with sharp cutlery, etc.

I liked how Elvira turns up in a completely different outfit every time we see her, which mostly seems like an excuse to show off Mann in terrific period costumes. She looks great in them too, as she did in the similar-era "Motherless Brooklyn" as a femme fatale. Maybe she was born too late; she would've done swimmingly in a rapid-patter Howard Hawks comedy.

Fisher has less to do, growing increasingly irate at her husband spending so much time with his "ex," as he calls Elvira. Though she gets one fun scene when the ghost puts a mickey in her drink and she goes for an impromptu, shallow swim at her own party.

Elvira is excellent help with his screenplay, Charles having endured a killer case of writer's block of late -- along with other, more marital, impeded impulses. Turns out Elvira may have been more than just a muse for him.

Judi Dench turns up as Madame Arcati, a faux French spiritualist who is ruined when her levitating stage act goes south during a performance before a posh crowd including Charles. He gets the idea to have her do a private seance at his mansion so he can gather material to introduce a supernatural element to his script. But it ends up snatching Elvira from the great beyond.

Director Edward Hall and screenwriters Pier Ashworth, Meg Leonard and Nick Moorcroft work furiously to avoid delving into any stickier aspects of the film's metaphysical implications. Like, where exactly to these souls go, having no memory of having died? And why is Elvira initially insubstantial, but soon can touch Charles and do... other things? And is Arcati really a fraud or just a self-deluded kook who finally gets a spell right?

As Charles, Stevens basically just spends 99 minutes doing that flustered upper-crust British gentleman thing, a captive of his circumstances rather than the author of them. He never seems to have an original idea of his own, though in the end we see the reason why. (A bit of a modernist nod in the vein of "The Wife." Ghost girl power!)

In the end, "Blithe Spirit" is the story of a feckless chap who cheats on his wife with his ghost wife, knocking on the door of every obvious joke you can think of. I hate to say it, but if you wanted to remake this material it probably would've worked better as a broad contemporary comedy, maybe a little bit raunchy and crude.

Adam Sandler and Kristen Wiig toiling in Jersey seems about the right speed. Surprisingly, I'd actually rather watch that than this DOA rehash.

Posted by Christopher Lloyd at 7:09 PM