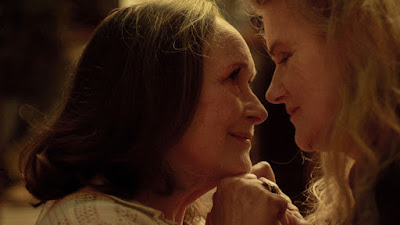 Imagine coming home one day to have your entire life ripped away from you. And nobody even knows about it.

You're barred from entering the place where you've lived for years, consigned to the shed in the back which was just used to keep your stuff. The person you've loved for decades is struck ill and kept from you, other than a few uncommunicative moments. Your long-held plans to move away together are dashed, instantly and maybe irrevocably.

Effectively, you've been robbed of everything that defined your existence.

That's the story of "Two of Us," the affecting romantic drama from France that is that nation's official entry for the Oscars. (Under the Academy's arcane rules, only one film from each country can be considered for Best International Feature.)

This is a quiet, intimate, and yet emotionally powerhouse movie anchored by two splendid performances by Barbara Sukowa and Martine Chevallier. It's not often you get to see a passionate romance between two older women portrayed so unflinchingly, both emotionally and physically.

Madeleine (Chevallier) is perhaps in her early 70s, a French widow who raised her family in quiet anguish, married to a man she didn't love. That was reserved for Nina Dorn (Sukowa), a slightly younger German expat and retired teacher. They've carried on an affair for decades, first hidden from Madeleine's marriage and now from her two grown children. Today they live across from each other in opposite apartments, though Madeleine's is the real home and Nina's just a nearly furniture-less depository.

Nina is frustrated that they've had to hide their love so many years, and is pushing to sell their places and move to Rome, where they first met. But Madeleine, still feeling tied to this place and her family, is not ready to admit her sexuality to the world, and hesitates.

Disaster befalls when Madeleine experiences a stroke after the couple have a huge argument. After she returns home from the hospital, unable to speak or walk, Nina finds herself in an impossible situation and crushed with guilt. Although she has a key to the apartment, she can't come and go because a live-in caretaker, Muriel (Muriel Bénazéra), is always there.

Nina offers to watch over Madeleine but is rebuffed. Madeleine's daughter, Anne (Léa Drucker), is completely unaware of the relationship and subtly pushes away the woman she thinks is merely a friendly neighbor. Her brother, Frédéric (Muriel Bénazéraf), bears resentment for his mother's soured relationship with their father and remains physically and emotionally checked out.

Things go on. There is unavoidable conflict with Muriel and later his son, Theo (Augustin Reynes). Nina responds with less than stellar behavior herself, though we identify with her utter anguish at being locked out of her own life.

Meanwhile Madeleine, who has been as still as a mannequin, begins to show signs of recognition and consciousness. But circumstances transpire to keep her and Nina apart.

I was surprised how the film played out almost like a crime procedural, with Nina having to act as the thief, gradually stealing back pieces of her own identity. Filippo Meneghetti, a first-time narrative feature director, wrote the screenplay with Malysone Bovorasm, collaborating with Florence Vignon.

It's a very simple, spare story lacking in big look-at-me moments. And yet by underplaying, it tugs that much harder at your feelings than would something with syrupy string music and showy "Oscar clip" moments.

Sukowa, with her fierce lion's mane and proud features, gradually reveals herself as a formidable adversary to anyone who would try to deny her love for Madeleine. Chevallier obviously gets less to do, spending much of the movie sitting expressionless, but manages to give us little hints and winks about what's really going on beneath that deceptively placid exterior.

Taking place almost entirely inside just the two apartments, "Two of Us" is a film of interiors -- those we show to the world, and that which we keep hidden, sometimes against our deepest wishes.

Posted by Christopher Lloyd at 7:00 AM