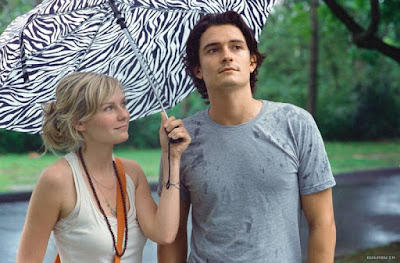 It's not often you can lay low a bunch of careers with one movie. But "Elizabethtown" managed to do just that.

Consider that Cameron Crowe was one of the hottest, most original voices of the 1980s through early 2000s -- with the box office, industry clout and Oscar recognition that entails. Stars Orlando Bloom and Kirsten Dunst were riding high off their recent participation in the Lord of the Rings/Pirates of the Caribbean and Spider-Man series, respectively, and would continue to do so awhile longer, being carried by those franchises rather than carrying them, their brief heydays as A-listers over.

"Elizabethtown," a tragicomedy/romance in the vein of "Harold and Maude," was panned by critics though it didn't do as badly at the box office as everyone thinks, eking out a mild profit with $52 million in ticket sales against a middling budget of $45 million. (Not accounting for distribution costs and  theaters' cuts.) And yet it sideswiped Crowe almost completely.

Other than a couple of musical documentaries, Crowe wouldn't make another feature film until 2011's ill-conceived "We Bought a Zoo" -- "I'd rather not go," audiences said just based on that title -- and seemed to reach his nadir with 2015's "Aloha," which had the dubious distinction of casting Emma Stone as an Asian-American. Other than a short-lived Showtime series, his IMDb profile is blank the last five years.

Usually for a big-name director (especially a white dude), it takes at least three bombs in a row to knock the off their privileged perch, though "Elizabethtown" managed to do that in one fell swoop. It's a quirky, offbeat film about a morose shoe designer who returns to his dad's Kentucky hometown for his funeral and finds unexpected romance with a inimitable flight attendant.

Is this a good movie? It is not. The script is equal parts memorable and forgettable, with plenty of terrific dialogue that sticks with you and a lot of scenes that just sort of piss themselves away into nothingness.

And yet, I couldn't bring myself to dislike it, even at times when I wish'd the movie would stop what it's doing and do something else.

It's a mess, but it's an authentic one.

With so many films, especially the romances, that are slick and facile, steering us right to every quick and easy emotional high or low, here is a movie that is more like life as it really is: inconsistent, not always making sense, sometimes filled with weirdness for weirdness' sake. It's not chasing a single story thread, but having a nice wander.

Its enduring charm is Dunst as Claire, a self-declared one-of-a-kind girl who sees herself as one of the "substitute people." These are the people other folks hang around with until they're ready to move on to the real thing. But she sees something in Drew (Bloom), a morose shoe designer who has just cost his company $1 billion on a horrific sneaker that looks like the creature from "Alien" swallowed an Air Jordan.

It's called the Späsmotica, which sounds less like something Hollywood is parodying than showbiz types being out of touch with an industry they don't understand.

Drew has, not surprisingly, been fired by his boss (Alec Baldwin) and the news of his spectacular failure is set to hit the business world next week. His girlfriend, Ellen (Jessica Biel), the boss' right-hand woman, doesn't even bother to say she's breaking up with him since it's so self-evident that's what someone like her would do in that circumstance.

"I have recently become a secret connoisseur of 'last looks.' You know the way people look at you when they believe it's for the last time? I've started collecting these looks," Drew narrates.

He resolves to kill himself, rigging up his expensive exercise bike to stab him in the chest with a butcher's knife, when he gets a call from his sister, Heather (Judy Greer): their father, Mitch, has just died of a heart attack while visiting his hometown, Elizabethtown, just south of Louisville.

(Of course, he pronounces it loo-ee-vil, as is the way of Yankees, not the proper loo-ah-vul.)

Their mom, Hollie (Susan Sarandon), is so distraught she refuses to attend the services in Kentucky, not to mention she knows she's still seen by the people there as the harridan who stole Mitch away to California (nevermind they've lived in Oregon the past 27 years). So Drew is conscripted to go represent the family.

On the redeye flight there, Drew is the only passenger. Claire is the personable, overly familiar flight attendant who insists he be upgraded to first class, just because she doesn't want to have to keep walking to the back of the plane. She invades his personal space and asks all sorts of uncomfortable questions about his trip and pretty much violates every rule I'm guessing they have in the flight attendant training manual.

Claire believes many strange things, not unlike Sarandon's delightfully batty Annie Savoy. "I don't know a lot about everything, but I do know a lot about the part of everything that I know, which is people," she says, more truth than boast. Her signature "thing" is to make a rectangle of her fingers in front of her eyes, miming a camera, which she then depresses an imaginary button to take a picture of this moment.

(This movie taking place in the day of flip phones, I wonder if anyone of Generation Z or under would even recognize this gesture.)

In Kentucky Drew is surprised to find himself the local celebrity, even though he hasn't been there since he was a kid. Mitch (Tim Devitt in the flashbacks) was the local favorite son who bragged all over about Drew and his incredible shoe.

There's too many background players to name, but they collectively act as a sort of Greek chorus of energetic Southern hospitality. There is constantly food everywhere. Paula Deen, per-canceling, is Aunt Dora, always in or just coming out of the kitchen, and Loudon Wainwright III plays his Uncle Dale. Paul Shneider plays their kid, Jesse, a never-was rock star still adjusting to the role of father, as his kid is the local terror.

The great Bruce McGill turns up as Bill Banyon, a former business associate of Mitch's who... well, we're not really sure why he belongs in the movie, but we sure are glad having him around, per se. Gailard Sartain is Charles, the local mortician who regards people from California as puzzling curiosities, and thinks the word "cremation" is a foreign language.

Drew stays in the famous Brown Hotel, where a days-long wedding celebration between Chuck and Cindy results in a never-ending party all around. His head ready to explode, Drew gives Claire a call and they end up having an all-nighter conversation, finally deciding to drive for a sunrise meetup.

It's a classic movie magical moment, except real life usually isn't so magical, and neither is their meeting. "I think we peaked on the phone," Claire quips. But she ducks out of a flight to Hawaii and she and Drew give it another crack.

Things just sort of happen in "Elizabethtown," whether you expect them or not, or even if they make sense being in the movie or not. It can be dizzying but occasionally delightful, like stumbling onto an entire city block of street performers. It may not all go together, but you enjoy stopping here and there for a listen or a look.

For instance, Holly, having been absent for almost the entire movie, suddenly turns up at the end to give a big speech at Mitch's service, complete with a randy story about a neighbor giving her a comforting hug and getting an erection. She even breaks into a tap dance to the tune of "Moon River," which you'd not have thought was tap-able.

There's a lot of music in the film, of course, and I admit sometimes it feels like Crowe constructs his screenplays around the songs he would like to play in certain spots rather than the other way around. But his ability to pluck the emotional heartstrings with a few seconds of a well-placed pop song is pretty magical.

I'll admit that just a few bars, the refrain of Tom Petty's "Square One," got me welling up. How we miss him so.

Claire goes away again at the start of the last act, and I couldn't help thinking the movie would be better if she doesn't turn up for the inevitable reunion in a crowd at the end. Bloom's Drew is rather a sad drip whenever she's not around, and the movie tends to deflate without her presence.

Really, what would make the most sense is to have this be Claire's movie, and Drew is just a guy who wanders in toward the end. I'd love to see what made her turn into such a brilliant, self-confident, self-sware creature.

Dunst, whose looks have been cruelly commented upon, is dazzlingly winsome here, and even a little bit unhinged and threatening. With her adorably imperfect teeth and piercing blue eyes, Claire seems just off-kilter enough to be distinctive but not merely some cool-girl concoction of Hollywood.

"I'm impossible to forget but I'm hard to remember," she says, which is a great line in a not-so-great movie.

If "Elizabethtown" were a recipe, it would be the kind where the list of ingredients is a page long and reading them you're not quite sure how it all goes together together. The best dishes, and I think the best movies, only have a handful of flavors at most. Crowe tries to include three-fourths of the spice rack and whatever's in the pantry, too.

Even when this soufflé deflates, though, there's some surprisingly good lickings around the edges.