Review: "The World to Come" 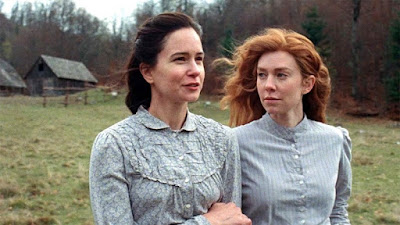 I wasn't planning to write this review.

"The World to Come" was the last movie I saw this week, and usually that's the one I just talk about on "Indy Style" on WISH-TV, time constraints being what they are. If I feel like I can't give a film a thorough consideration in writing, I'd rather not do it at all.

Plus, my reaction falls into that very specific grouping of reviews that is the least favorite of the critic to pen: disappointed, but without any particularly strong points of contention or weakness. It's like trying to write about plain oatmeal -- it was consumed, and now it's done and soon will be forgotten.

But I found a few nagging points sticking with me. I think this could've been a very good movie and isn't, and am trying to figure out where it went wrong, or where I soured in receiving it.

Let's start with the obvious: thematically it's too similar to other, better movies I've seen in the last year: "Portrait of a Lady on Fire" being the most notable, and even the relatively lackluster "Ammonite" played better than this. Even "Lizzie" from a couple of years earlier had more to offer.

I'm not sure when period films about two women falling into a passionate affair, usually for the first time in their lives, became a rut.

But what felt amazing and incredibly emotional in "Lady" and at least passably engaging in "Ammonite" registers as forced and hackneyed with "World." At times it plays almost like a "Saturday Night Live" sketch parody. It's the sort of art film that people who don't like art films would find too easy to mock.

Katherine Waterston and Vanessa Kirby play frontier farmers' wives circa 1856 who come to live near each other. Both feel trapped by their circumstance and the role women are expected to play as subservient laborers and bearers of children. They live in a time and place where females faced few choices, and had to either knuckle under to the patriarchal system or strive to break free of it, and be crushed.

We know instinctively from the first time Abigail (Waterston) looks at Tallie (Kirby) with an appreciation that goes beyond just banishing loneliness the couple is doomed. For the rest of the movie we're just counting the ticks until it comes.

Both wives are blamed for being childless. In Abigail's case, she did have a daughter who died a few years earlier, and she has resisted efforts to have another. Tallie is a different case, openly expressing her revulsion at the prospect of motherhood and reveling in her status as a quasi-rebel.

She takes a sassy tone with her husband, Finney (Christopher Abbott) and is prideful about their wealth (relative to other local homesteaders) and long, wavy strawberry blonde hair. Finney, who likes to quote the Bible about a wife's duties, stews in the sort of way we know trouble is coming.

Casey Affleck plays Dyer, Abigail's husband, who treats his wife as just another asset to be accounted for in his ledger of the farm's business. He's less outwardly hostile than Finney, but is vexed by a wife who seems to have no space in her heart for him. A woman of literary tastes and ambition, Abigail has the soul of poet locked away in the pantry, peeling an endless pile of potatoes.

At first a joyous friendship, the relationship between Tallie and Abigail eventually takes a turn to the torrid, with all the usual corset-heaving fumblings we've come to expect. It's almost less a lustful desire than a needful clinging to something, anything other than the drudgery of work and submission.

Director Mona Fastvold's last feature was "Vox Lux," which I  could barely stand to watch. Screenwriters Ben Shepard and Ron Hansen craft a lot of beautiful language that feels like beautiful language written for a movie, rather than something that would actually flow from these women's lips or pens.

"The sunshine streaming through the branches makes a tremendous farrago of light and shade," Abigail narrates. "We hold our friendship between us, and study it, as if it were the incomplete map of our escape."

The movie moves in exactly the direction we expect, towrad an ending that feels less inevitable than unavoidable. Its biggest problem is it does nothing to develop the two husband characters as anything other than one-dimensional antagonists -- primitive lumps who speak little and always seem to be occupied with some form of killing, as when Dyer calmly scrapes the guts out of a hawk he has shot with his fingers, no more bothered by the gruesome glob than if he was picking pebbles out of the tilled earth.

I actually ended up feeling a little sorry for him, this unloved fellow who is as held fast to his assigned place as Abigail is by hers. They actually discuss separating in an indirect way, and part of me wished they'd done so right there so she and Tallie could run away together, or be hunted as violators of natural law, or murder Finney and then run away, or anything other than doing exactly what I expected them to.

Posted by Christopher Lloyd at 7:43 PM