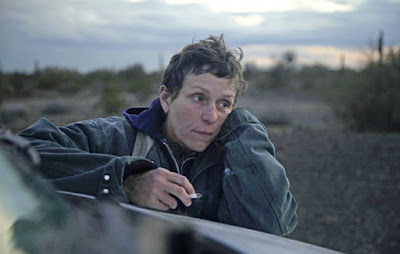 One of the worst feelings I’ve experienced in life is having circumstances imposed on me rather than having a choice. In my warped way of thinking, I’d rather have a mediocre outcome of my own choosing than a better one I was forced to accept. The trick, of course, is finding a way to embrace the lot you’ve been dealt and making it your decision.

In this way I’m a lot like Fern, the character played by Frances McDormand in “Nomadland,” an extraordinary film that should be a top Oscar contender in multiple categories. She is in her 60s, a widower, and has literally lost everything: her husband, her job, her home and even her very town. When the gypsum plant in Empire, Nevada, closed down it became a ghost town overnight.

Packing most of what she owns into an commercial panel van, Fern sets off for a life on the road, rambling around the West, taking odd jobs for a season or two, such as a seasonal packer at an Amazon shipping center, but always on the move.

She lives in her van, which she has gradually converted from a steel box into a fairly comfy little dwelling. An RV would be more appropriate, of course, but even the small ones are pricey, so people like Fern of meager means are forced to become versatile DIYers.

“Nomadland” is a film in a newish trend we’ve seen in recent years: outstanding fictional films adapted from nonfiction books -- in this case, one by Jessica Bruder that looks at the newfound trend of vandwelling. It became popular in the days after the 2008 crash, as people cast aside by society, many of them older unmoored folks like Fern, took to the road and made it an ethos.

Connected through the web, they see themselves as modern pioneers, seeking new ground in the American dream that’s not tied to a piece of land, owning a bunch of things and holding down a good job. A relative newbie at this enterprise, Fern soon becomes an enthusiastic devotee, even as she occasionally struggles with staying warm or finding a safe place to park overnight.

Fern is not a real person, though several others from Bruder’s book do make an appearance playing fictionalized versions of themselves. There’s Bob Wells, a Santa Claus-like figure who’s the unofficial guru of the nomads. He organizes occasional meet-ups in the desert where hundreds of vanners will show up for a few weeks to share companionship, barter for goods and share best practices -- like what to do with your waste, human and otherwise.

No, Fern is a concoction of writer/director Chloé Zhao, who has in just a handful of films become one of Hollywood’s most confident and accomplished filmmakers. I am just astonished by the profound stillness of this movie, which often sprawls across long wordless stretches where we just follow Fern around and experience her life as she does. We are never less than enthralled.

Usually a young director feels compelled to fill any long silences or pensive pauses; Zhao embraces them with a poise that she and McDormand can build an ineluctable rapport with Fern that will carry us through. Fern is sweet-natured but not a saint by any stretch, and can be prickly and stubborn when she feels like her independence is threatened.

A few other characters wander in and out of the story. A friend, Swankie (played by herself), helps initiate Fern into the nomad life. She also meets Linda (Linda May), a strong, independent woman who reminds Fern of herself maybe 10 or 12 years down the road. May gets a terrific scene where she talks about the most memorable moment of her life, which is not what you’d think most people would pick.

David Strathairn plays David, a nicely creased fellow nomad who takes a shine to Fern. Something like a friendship begins to grow as they run into each other at various jobs or van rendezvous, and maybe something more. At one point both of them are forced by circumstance to return to their families, and David finds the allure of one place puling at him again. Will it be the same for Fern?

“Nomadland” is not just an indelible portrait of one person, but an unconventional way of life some have chosen as their identity after it was presented as their only option. What others might call bad luck becomes wisdom.