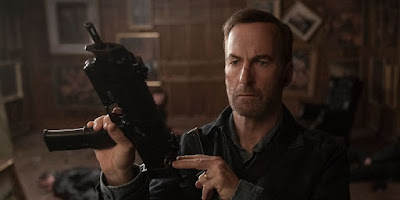 Hutch Mansell isn’t the sort of guy to make a strong impression on you… or any kind.

He’s a middle-aged suburban dad who punches the clock at work, does his father/husband duties at home dutifully if without a lot of zeal, avoids trouble and doesn’t appear to have any major vices or hangups.

Hutch, played by “Better Call Saul” star Bob Odenkirk, is smallish in stature and physically closer to timid than imposing. His father-in-law and brother-in-law (Michael Ironside and Billy MacLellan), who run the machine shop where he does the books, push him around because they know he won’t push back.

When a pair of nervous thieves break into his house in the middle of the night, Hutch is content to hand over his valuables without a fight. Even when his teen son, Blake (Gage Munroe), tackles one of the intruders and Hutch has a clear shot to take out the other one, he demurs and lets them flee.

The cops tell him he did the right thing, but at this point everyone is convinced he’s a wimp.

But as we’re about to find out, Hutch is a “Nobody” -- someone with a dark past that he’s spent the last few years trying to stash away. The break-in winds up being the match that lights a long-dormant fire he’s been secretly longing to stoke.

I’m not sure what you’d call “Nobody,” directed by Ilya Naishuller from a script by “John Wick” writer Derek Kolstad. It wears the clothes of a standard revenge action/thriller, but I couldn’t help detecting dark notes of humor throughout.

Certainly the presence of Odenkirk, a veteran comedy writer/actor, underlines that theme. Easing up on 60, he’s basically the polar opposite of a screen badass. Though when Hutch’s glare finally hardens, we feel like we ought to take a step back.

Hutch winds up getting into an epic duke-out with some hoodlums on a city bus. I like the way Naishuller and the stunts team stage these -- very gritty and bloody, without any superhuman kinetics or resistance to injury. Hutch gets as good as he gives, and is pretty well a pulp by the end.

Turns out one of the toughs is the kid brother of Yulian Kuznetsov (Aleksey Serebryakov), a peacocking local Russian mob kingpin. He vows payback, leading to ever-escalating levels of violence, which Hutch knows he should do more to avoid but really revels in -- at one point literally crossing his fingers hoping the Rooskies will respond to his latest instigation.

The always-terrific Christopher Lloyd (not me, the talented one) turns up as Hutch’s dad, wasting away in a nursing home but still boasting a quick and well-placed pinkie finger. RZA makes a late appearance as an old chum with similar talents and inclinations. Connie Nielsen plays Hutch’s wife, who has a different reaction than you’d expect to his relapse.

“Nobody” is simultaneously very grim and a helluva lot of fun. We all sometimes entertain the daydream we could break out of our tame identities and be a Bond or Bourne. This time the bruiser is pretending to be one of us -- not putting on a mask, but taking one off.

Posted by Christopher Lloyd at 8:30 AM