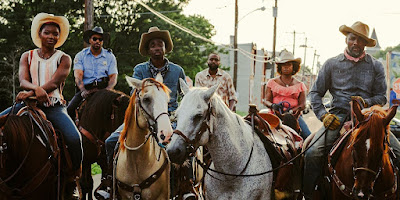 Black cowboys riding the range on the mean streets of Philly? It sounds like a fantastical Hollywood concoction, but as "Concrete Cowboy" movingly illustrates, inner-city stables were and are a real, albeit dying way of life stubbornly clung to by modern horse lovers keeping the spirit of the Old West alive back East.

The solid new Netflix drama stars Idris Elba as Harp, an old-school cowboy living the life as the top cowhand at Nessie's Stables, a rundown horse haven and gathering place for local equine enthusiasts. They have a large empty field across the way for giving kids riding lessons, exercising their dozen or so horses and holding neighborhood festivals.

A few steps in any directions, though, and it's the familiar urban blight of tattered homes, liquor stores, poverty, drug deals and suffering. These cowboys, who highlight the trodden history of Black and brown folks like them who helped tame the West, know they are playing out their last string on borrowed time... but they'll keep riding it as long as they can.

The film, directed by Ricky Staub from a screenplay he co-wrote with Dan Walser, is at once sentimental and gritty. Caleb McLaughlin plays Cole, Harp's estranged teen son who gets dumped off at his row house by his mother after she becomes fed up with his constant scrapes with trouble.

He's not a bad kid, but he's sliding down a long slope toward a sharp cliff.

Harp seems indifferent at first to Cole's presence. He offers him a couch to sleep on, and not much else. Harp has nothing but beer in the fridge and has a horse, Champ, squatting in his living room. To Cole, it seems like his pops cares more about the hooved resident than him.

Cole soon receives some tough love from the other cowboys, notably Nessie herself (Lorraine Toussaint) and Paris (Jamil Prattis), who wound up in a wheelchair -- not from riding but gangbanging. Cole is put to work shoveling horse poop and other menial jobs, and ever so slowly starts to ease into this adopted community.

Most of the horses are castoffs and headcases, such as Boo, a stallion the veteran cowboys are afraid to go near. But Cole finds an affinity for his fellow hothead, and together they manage to cool each other's temper.

He also runs into Smush (Jharrel Jerome), a childhood friend who gave up the cowboy life to run the streets. Cole instantly falls in with him, much to Harp's dismay, and they expand Smush's drug trade, bringing the attention of the local street boss.

It's clear Cole is going to have to choose between these two new ways of life, and it's here where the story becomes a bit rote and predictable. We know what's going to happen to certain characters long before they do, and it becomes an exercise in waiting around for the movie to arrive.

Still, I reveled in the colorful background characters -- many of them played by real-life Philadelphia cowboys (like Prattis). Some of the best moments are just hanging around a campfire, huffing on a harmonica, singing old songs and praising forgotten history.

Devenie Young plays Trena, another childhood friend all grown up into a fetching cowgirl. She's willing to give Cole a chance, after she's put him through his paces. Clifford Smith (aka Method Man) turns up as Leroy, a stable regular as a youngster but now a police detective. There's a tenuous peace between the stable crew and Leroy, knowing there are lines that cannot be crossed. Byron Bowers plays Rome, the chucklehead of the group who's still telling the story of the time -- one time -- he beat Harp in a race.

It's not a terribly meaty part for Idris, who hangs in the background more than I would've liked. Harp seems to have a very clear concept of himself, where he's lacking and when he has a right to strut. He knows where his range is and sticks to it. Part of him wants to be a good father, but he's also wise enough to grasp you can't pick up at year 16 and expect a smooth jump right out of the gait.

Even though the story could've stood to be a bit more innovative, there's a lot to like about "Concrete Cowboy." It's another page in the rich story of the Black experience in America, filled with degradation but also fierce pride and unfettered joy. Even though we ran out of new land to explore a long time ago, some are still out there riding along the edge of whatever frontier they can find.