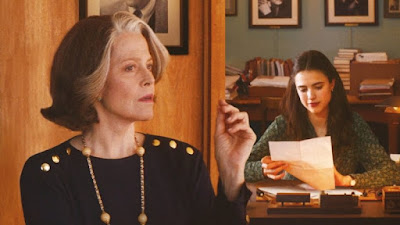 I was pleasantly surprised by "My Salinger Year," a based-on-true literary story with a lot of heart and terrific performances by Margaret Qualley and Sigourney Weaver.

This is one my "afterthought" reviews, meaning I hadn't planned on doing it but unexpectedly found some time in my schedule. I've really stepped up the frequency of my reviews this year, and hopefully you've appreciated the effort.

It's doubly pleasing when I stumble across a film I admire so much during these moments of serendipity.

Qualley plays Joanna Rakoff, an impressionable young woman who ditches grad school and her boyfriend in California to move to New York City and pursue a writing career. She winds up working as an assistant to the boss of a storied literary agency, Margaret (Weaver), who counts among her client list the famously reclusive J.D. Salinger, author of "The Catcher in the Rye," a book that has become a rite of passage for young intellectuals.

Joanna is bright and enthusiastic while Margaret is old-school and imperious. The obvious comparison will be made to "The Devil Wears Prada," with Weaver's silver-streaked tresses matched to Meryl Streep's.

But this film, adapted for the screen from Rakoff's book by writer/director Philippe Falardeau, quickly diverges in tone and intent. It's not a denunciation of an entire sick industry and way of thought, but a very specific story about people who move about in a a cloistered society.

The story is set in 1996, a time by which Salinger had already gone three decades without publishing anything. His reticence to engage with his adoring public or submit to interviews only heightened his mystique, as the throngs felt certain he was continuing to write but just not sharing it with the world.

It's ironic that the creator of Holden Caulfield, a kid who seemed to reject everyone around him, was celebrated for being so withholding.

In the course of the movie Salinger is a minor figure, only heard on the phone or glimpsed from behind. He does decide to publish his first book in many years (actually just reprinting an old New Yorker piece), though that event and his relationship to Joanna are not really central to the piece.

It's more about Joanna finding herself and the courage of her own convictions, evolving from reticent mouse of a girl to a bold woman who asserts her independence -- from her job, the men in her life and even Margaret, who becomes a mentor to her, surprising both of them.

Margaret only reluctantly allows one computer in the office, preferring to do business over the phone and Dictaphone. She initially hesitates to hire Joanna because it's bad business to have aspiring writers in a literary agency. She's very much part of the Old New York world of restaurants, conversations and connections.

Joanna is given two main assignments: transcribe Margaret's dictations and answer the mail sent to Salinger. "Answer" is not a completely accurate description of her role, since Salinger has instructed that the exact same form letter be sent to every writer explaining that he will not respond to any correspondence. Then, Joanna is to shred the fan mail.

The only reason they even go through this step is because of John Lennon's murderer, who infamously had a copy of "Rye" when he was arrested and was among those who wrote to Salinger and was rejected. Of course, Joanna becomes enthralled with all the emotion and thought these people put into their missives.

Falardeau cleverly casts these writers as characters who show up in the middle of Joanna's day, reciting their letters to Salinger and to her, his reluctant stand-in. Of course, she is soon tempted to respond in a more meaningful way.

On the side she becomes involved with Don (Douglas Booth), another aspiring writer who works in a "socialist bookstore" and considers the commerce of publishing (represented by Margaret) as contemptible. Don is a heel who is selfish but charming in a gruff proletariat sort of way, and Joanna goes along with the relationship without really embracing it.

Like her job, it's an affair lacking any real romance.

Joanna speaks occasionally on the phone with Salinger, who encourages her to invest in herself, both as a writer and a person (despite calling her "Susanna" early on, owing to wartime hearing loss.) Gradually, she starts to listen to this distant muse. Interestingly, she has never actually read "Rye" and hesitates to do so, preferring to bask in others' love for it.

A few other figures float around in the background of the movie. I really liked Seána Kerslake as Jenny, Joanna's friend, roommate and fellow writer wannabe, who is first to see and grasp her future. Colm Feore pops up as Daniel, Margaret's kindly, well-dressed companion -- brother? boyfriend? we're not really sure, but enjoy having him around. Brían F. O'Byrne plays Hugh, who once had Joanna's job but graduated to Margaret's legal-guru-slash-protector.

But really the focus is on Joanna and Margaret. They are two women who seem very different, one at the end of her turning and the other right at the beginning, who come to find more in common than they'd ever thought possible. Margaret doesn't exactly melt into a bowl of warm empathy -- it's just not in her DNA -- but she realizes that Joanna has a promise and resolve in her that needs to be tapped, even if it's not by her.

I only know Qualley from her temptress role in the enjoyable but vastly overrated "Once Upon a Time in Hollywood," so I was glad to see her do something more substantive and emotive. Joanna isn't the easiest character to play as someone who is just learning to access her own emotions, but Qualley finds a way to let us see past that timid exterior.

The real Joanna Rakoff has indeed gone on to a notable writing career, including the memoir upon which this film was based. In the end it's less about the mystery of J.D. Salinger than the woman whose barest brush with greatness gave her the courage to chase her own.

Posted by Christopher Lloyd at 1:36 PM