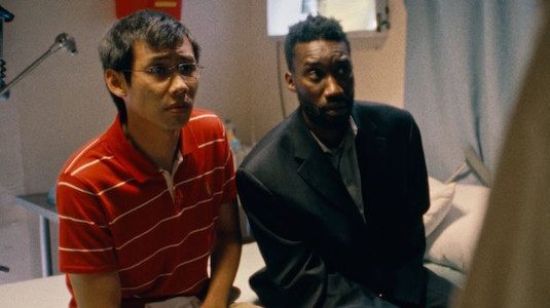 Are most of us?

In other words, they're the bottom-feeders of an industry that was already a cellar-dweller in the esteem of polite society.

But really, you can apply the term to most any profession. A mope is someone waiting for the big break that's never going to come. Maybe they're unlucky. Maybe they're stuck in the wrong place or time. Maybe they just lack talent and are blind to its absence.

We've all encountered mopes in our workplace. They have lots of passion but not much ability. Worse, they don't seem to learn from their mistakes or grow in their capabilities. Everyone chuckles and shakes their head when they pass, wishing someone would tell them the truth, not wanting to be the one who does.

I have to say, "Mope" isn't particularly interesting or good. It takes a challenging concept and does all the obvious things you could do with it, then tries to go all "Taxi Driver" in the last act, unconvincingly.

It raises a lot of uncomfortable questions, though. Why do some people make it and others don't? We've all seen individuals (we think) less talented than ourselves rise faster and further in our chosen profession, and wonder why. We put our heads down and grind, believing that if we work hard enough and yield our pound of flesh we'll eventually reach our goals. Because that's what we've been taught, right?

So we've been told. Always, by people sitting at the summit looking down at the multitudes of mopes striving in the valley, unnoticed.

Except the world doesn't work that way. For every movie star there are 10,000 people who tried to make a career in acting and couldn't. Same for professional athletes. Heck, even with more pedantic paths there are tons of people who slave away at endeavors nobody else seems to value.

I've been writing movie reviews for almost 30 years now. I've never made a living at it. At times it's produced a little bit of income and an appreciative audience. Other stretches I've earned literally nothing and felt like nobody is paying attention. So am I mope?

Don't get me wrong. I love doing this.

Tom, who gave up a cush IT job to chase adult entertainment, fixes up the company's website and online sales, so Eric is loathe to cut him loose. Steve becomes the annoying guy nobody wants to work with, his naive enthusiasm quickly morphing into wildly misplaced ego-centrism.

They try to take their act to Rocket (David Arquette, also a producer), a medium-big name in the industry, who demeans them by demanding they perform in ethnically stereotypical ways, like Tom speaking with a Japanese accent (he's actually of Chinese descent) and Steve playing the boisterous black buck.

Things go on, as their attempts to raise money to start their own company sputter out. Later we meet Steve's parents (Clayton Royner and Peggy Dunne), who he'd hoped to pump for investment money and instead deliver some startling truth. Tom starts to open his eyes to their delusion, but Steve won't... or can't.

The sex scenes are deliberately cringe-y, the acting rather stilted and director Lucas Heyne, who co-wrote the script with Zack Newkirk, can't seem to land on any tone or pacing that work for very long. Frankly, I had trouble getting through it.

Here's the thing that "Mope" forces us to confront: it's just not true that if you love something and sacrifice for your craft, it'll yield the results you want. Failure and disappointment are likely, even common.

Brace yourself, because here's the really hard one. If you give your all to something you truly love and nothing happens, eventually you'll stop loving it. Maybe... even start to hate it.

I'm not suggesting the cast and crew of "Mope" chuck it all and go back to Peoria or wherever. (Actually a lovely town, btw.) By all means, try, try again. But it's a hard thing to accept that you're the mope. Sometimes it takes 25 attempts to see the light, sometimes 2,500.

Posted by Christopher Lloyd at 6:44 PM