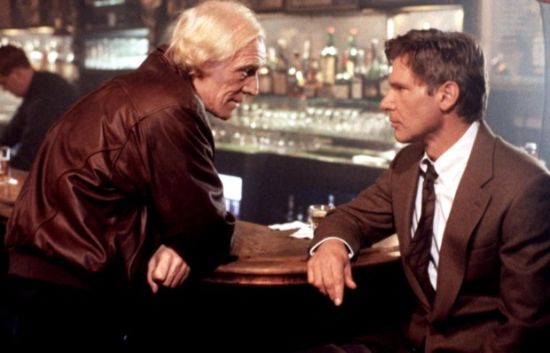 In my book "The Hunt for Red October" is pretty well a perfect movie. Its sequel, "Patriot Games," is not. It's still a taut, worthy political thriller that's interesting for changing lead actors in the middle of what would become a film trilogy.

Strictly speaking, the events in "Patriot Games" precede those of "Red October" in the Jack Ryan timeline, which was actually the first novel by Tom Clancy to feature what would become his signature character. At the time Ryan was a young professor of military history, probably in his late 20s or early 30s, and had not yet gone to work for the CIA.

This was believable for Alec Baldwin, then a svelte 32 and just coming off the success of "Red October" two years earlier. It was much less so for Harrison Ford, a few weeks from turning 50 when the sequel came out.

But Ford was at that time arguably the biggest box office star in the world, having just wrapped up the Indiana Jones series (for a while), earned his second Oscar nomination for "Working Girl" and been cheated out of a third for "Presumed Innocent." The studio chiefs were doubtless happy to swap out the relatively unknown Baldwin for megastar Ford... though "Games" actually earned slightly less than "Red October" in ticket sales.

The 1994 follow-up, "Clear and Present Danger," is generally regarded as the weakest of the trio but actually was the biggest commercial hit.

Various tales have wandered around Hollywood over the years why the switch was made. Officially Baldwin claimed he wanted to return to his first love of Broadway and had already committed to acting in "Streetcar Named Desire." "Red October" director John McTiernan had originally wanted Ford to play Ryan in that film and saw a chance to get him.

More recently Baldwin wrote in a blog post that he was pushed out in favor of an unnamed huge movie star, who was owed a lot of money for a greenlit picture that fell apart. Giving this star "Patriot Games" would square him with the studio, so a bunch of unreasonable demands were placed on Baldwin, including committing to an open-ended shooting schedule that would endanger his Broadway gig, to encourage him to drop out.

Producer Mace Neufeld, who has shepherded all the Jack Ryan movies including the reboots in 2002 (with Ben Affleck) and 2014 (Chris Pine), has said Baldwin had already exited the film before Ford was signed. But McTiernan himself largely confirmed Baldwin's version of events.

McTiernan has had his own problems, including long legal/financial troubles and a stint in prison for hiring a snoop to wiretap a producer with whom he was squabbling. He actually signed on to make "Clear and Present Danger" first, but stepped out when the studio pressed ahead with "Patriot Games," in which the villains are Irish terrorists.

As an Irish-American McTiernan declined to be involved, and seasoned Australian filmmaker Phillip Noyce ("Dead Calm") was brought in, and went on to direct the last film in the trilogy, too.

There doesn't seem to have been much of an attempt to establish continuity between the Jack Ryan character as played by Baldwin and Ford. The latter's is a resolute everyman hero in the Gregory Peck mold, a family man and straight-arrow patriot who is reluctant to get involved in violence and political intrigue, but finds he has a talent for it.

Baldwin's Ryan has a snide edge to him, a more caustic wit and a bit of primping ego. Even though Ford's one of my favorite film actors, I don't mind saying I found Baldwin's take on the character to be sharper.

But that also worked better in "Red October," where Ryan basically acted as our eyes and ears through which the audience engages the real central character, Sean Connery's Marko Ramius. I don't think people would've wanted to watch two more movies watching a guy who's basically a benevolent a-hole.

I was surprised watching "Patriot Games" again recently how streamlined and tight it is. Clancy's books tend to be fat with lots of side plots and supporting characters -- "techno-thrillers," as they came to be known, more noted for cunning postulations about potential real-world events than deep characterizations or lilting prose.

Screenwriters W. Peter Iliff and Donald E. Stewart real scrape the story down to the barest bone. It's a straight revenge tale with Ryan disrupting a kidnapping attempt on Lord Holmes (James Fox) and his family while visiting England, killing the 16-year-old brother of wolf-like terrorist Sean Miller. Miller is sprung from prison by his IRA-offshoot comrades and spends the rest of the movie trying to kill Ryan, his wife, Cathy (the always-luminous Anne Archer), and their young daughter, Sally (Thora Birch).

In the book the targets of the initial attack were actually Prince Charles and Princess Diana, though they were changed to a non-existent cousin of the Queen for the film. He comes across as something of a good-natured nobleman dolt, unaware that it's his chief aide, Geoffrey (Hugh Fraser), who's tipping off the Irish.

Alun Armstrong and David Threlfall play Irish law enforcement types who work for the Brits and spend much of the middle of the move chasing after O'Donnell, Miller and their crew. The latter has a terrific death scene after being foiled by the terrorists, his face pressed to the street and gruffly telling them, "Get on with it and be on your way" right before he's slain.

Samuel L. Jackson plays Robby Jackson, Ryan's dependable Navy buddy, and Richard Harris has a small but vibrant part as Paddy O'Neil, a "bagman" for the IRA who tries to weasel a line between O'Donnell's splinter group and playing the reasonable mick for the television cameras.

James Earl Jones reprises his role as Admiral James Greer from "Red October," pretty much the only holdover actor. He and Ryan have an interesting relationship, part father/son, part mentor/student and not a little bit king/annointed heir. As the CIA Deputy Director for Intelligence, Greer reassures without coddling, manipulates without cold-heartedness.

Greer gets the best out of Ryan by helping him find his way instead of pointing it out for him -- a patron who's never patronizing.

Greer knows how to compartmentalize the uglier aspects of his job, like sending special military forces to assassinate the residents of a secret camp in the Libyan desert based on Ryan's educated -- but hardly certain -- guess that this is where Miller is. This scene plays out with sad, scary music as Ryan watches satellite thermal images of bodies falling to the ground, horrified when another man in the room blithely calls out "That's a kill" while slurping his coffee.

"Patriot Games" was also the big breakout role in America for Sean Bean as Miller. He's so lean and rakish, and is completely committed to getting revenge that it blinds him to all other obligations. This part led to playing a Bond villain and Boromir in "The Lord of the Rings," which helped cement his semi-iconic status as someone adept at playing morally ambiguous characters.

Bit of neat trivia: during their final showdown aboard a motorboat through speeding through a storm -- absent from the novel -- Ford accidently struck Bean with the anchor both characters use as a weapon, giving him a permanent scar over his left eye. It required several stitches and they ended up working it into the movie, covering Bean's real wound with blood makeup.

Ford is famous for his chin scar, and it's a bit of Hollywood legend for him to give one of his own to Bean. It actually helped Bean secure the role of Napoleonic soldier Sharpe in the long-running British series of television movies.

I won't argue that "Patriot Games" is the equal of "The Hunt for Red October," because it's not. But they're also very different films, more cousins than siblings. Let's put it this way: I think Alec Baldwin could play Jack Ryan, because nobody knew who either one of them was. Harrison Ford played Harrison Ford in his movie, because that's what movie stars do.