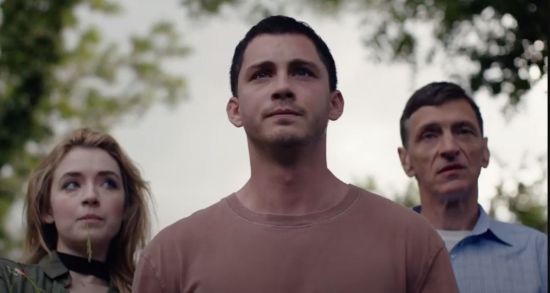 If you're a follower of indie cinema then the name John Hawkes is well familiar to you, though if you're not it's entirely possible you never heard of him. He was robbed of a Best Actor Oscar nomination for his transformative performance in "The Sessions" a few years back, and continues to do consistently excellent work, mostly in little films most people don't get to see.

His newest, "End of Sentence," is another terrific turn for Hawkes. He's playing a very closed-in character, the sort of person where most of the emotional concerto is taking place on the interior. Frank Fogle seems like the kind of guy where there's not much there, until you gaze long enough to see past the still waters to the roiling depths beneath.

Frank is the father of Sean, played resonantly by Logan Lerman, and despite being blood relatives are as different as two men can be. As the story opens Sean is being released from prison after a stint for various crimes, car theft chief among them.  Frank's wife and Sean's mother, Anna (Andrea Irvine), has just passed away, and it seems like the last cord tying them together has been severed.

However, she had one last dying request: that Frank and Sean travel to her ancestral homeland in northern Ireland and scatter her ashes at a remote lake. Thus begins a prototypical cinematic road trip story.

Frank is an odd duck. He dresses primly, doesn't drink or swear, is painstakingly polite and deferential to everyone he meets. Sean considers him a pushover, who lets people walk all over him -- and the people he's supposed to protect. There's a family history of violence, and Sean blames his dad for not protecting him.

Sean has a job lined up in Los Angeles, but agrees to go to Ireland in return for a plane ticket to the West Coast. There's also the matter of some property his mother owned, which will become his if he complies. It is understood by both men that the culmination of their mission represents the end of their relationship.

Of course, events transpire to delay their progress, dig up buried feelings and renew old conflicts -- but also open up opportunities for rapprochement. The primary vehicle for this is the entrance of Jewel, a local Irish girl played by Sara Bolger, into the story. Sean makes eyes at her at a pub, they  hook up for seemingly a one-night stand, and she winds up accompanying them on their journey.

Bolger is terrific at displaying a woman who has tremendous stores of vulnerability but also steely armor. She says upfront that she's running away from an abusive boyfriend. Sean, with his brusque exterior but little-boy-lost soul, appeals to her in a way that surprises her. Bolger also gets to sing a couple of tunes during the movie, and has a lovely plaintive quality to her voice.

Things go on. Attending a wake for his wife's Irish friends who couldn't make the trip for the funeral, Frank is surprised to learn of her having a wild past, including running off with a handsome fellow on a motorcycle. His curiosity soon becomes an obsession in plumbing the depths of this mystery, causing more detours and delays.

Frank is man full of fears who has been kept upright for the last 30 years by the love of a good woman. Now his only support is gone and he is unmoored in life, so he finds it difficult to throw a lifeline to a son in search of his own identity and home plot.

Elfar Adalsteins, directing his first feature film, and screenwriter Michael Armbruster have given us a beautiful film that is both familiar and novel. It is a story of loss, isolation and betrayal. And yet, when this yarn is all wound up we feel a sense of calm and even joy.

Posted by Christopher Lloyd at 3:52 PM