Review: "The Painter and the Thief" 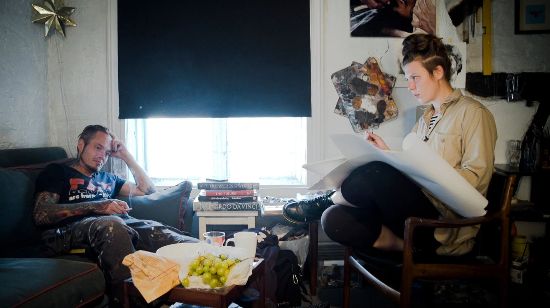 "The Painter and the Thief" is a curious and curiously affecting documentary about the most unlikely of friendships. Perhaps even... too unlikely?

Barbora Kysilkova is a youngish, established Czech painter living in Norway. She produces large, arresting photo-realistic paintings with unsettling images of death and decay. As the film opens she has just produced two amazing new works that are put on display in a gallery. They are stolen by two mysterious thieves who break in, roll up the canvases, tie them up expertly in rope and disappear.

They are soon caught and put on trial, though the paintings are not recovered. Barbora attends the trial of one of the criminals and feels compelled to speak with him. Mainly she's trying to find out where her paintings are, and is disappointed to learn that he has no memory of taking them or where they went -- sold, abandoned, destroyed, etc.

Clearly, she is intrigued by this man. His name is Karl Bertil-Nordland and he is a self-described gangster and drug addict who frequently wanders about in a fog. He remembers walking by the paintings regularly and being taken with them, but not stealing them or what he did with them. He is given some minor punishment, but their discussion continues after she asks him to pose for her.

Karl strikes a figure as intriguing as one of Barbora's paintings. In his 30s, lean and muscled, tattooed from stem to stern, his hair worn in a Viking-esque topknot with shaved sides, he nonetheless wears nerdy glasses and a sensitive, almost shy demeanor. Karl is fascinated by art and has collected a few small pieces himself here and there, and has a creative background as a old-school style carpenter.

The posing sessions give way to coffee and conversation, which soon move past the subject of the missing paintings, as they open up and find a lot in common. There's no mistaking the attraction between them, though both Barbora and Karl are in relationships with other people. The settle for the title of friends, and things go on.

Director Benjamin Ree hops around in time, showing their intimacy together, then rewinding to follow just one of his subjects in the period before, then fast-forwarding to months or even years later. They lose touch, reconnect, share food and intimate secrets about themselves, and so on.

We see the terrible urge that keeps pulling at Karl, and his almost pathological need to seek ways to harm himself. His favorite is to steal cars and crash them, and finally this pastime lands him in the hospital, and then in prison, for a considerable amount of time.

Still, Barbora is there for Karl, though she has troubles of her own. Her boyfriend is vexed by the friendship with Karl, without ever saying so, and Barbora's pathological need to constantly be painting. She'll spend money on paints and cigarettes but ignore the rent three months overdue.

Despite her calm, Earth-mother manner, there's a deeper layer of self-destructiveness in Barbora that mirrors Karl's.

It seems both Barbora and Karl are continually caught in spastic cycles of up and down, and they can't ever be up at the same time. It's a fascinating, slightly disturbing look at two seemingly very different people who share a lot more than either might care to admit.

I have to say I'm a bit skeptical of how this film was produced. It contains footage of things that Ree couldn't possibly have been around to shoot, such as the creation of the two paintings that will be stolen. Presumably Barbora filmed herself painting. Is this part of her normal process? If so, that needs to be shown and explored.

We also have a scene of her buying groceries and having her card declined for lack of funds. How could the director happen to be there to film this? Was he in the habit of following her around on mundane tasks to see if something interesting would happen? Is there footage of 40 other grocery story runs where she paid without incident?

It's all a little too neat.

I'm not sure what I'm alleging. I won't go so far as to say I think the entire documentary is a sham. But I wouldn't be surprised if Barbora and Karl's meetings were scheduled precisely so they could be filmed. My guess is their odd relationship is entirely legitimate, but the act of watching it unfold feels like a deliberately self-reflexive act.

Still, hoax or not, it's a compelling cinematic journey. Could we be friends with someone who callously struck at the heart of the thing we love most? If a person destroyed the last two months of movie reviews I wrote, would I have the strength of soul to offer curiosity and understanding instead of anger?

I'm not sure, and the unknowable mystery of this question is why "The Painter and the Thief" is such a compelling vision.

Posted by Christopher Lloyd at 6:02 PM