Video review: "The Way Back" 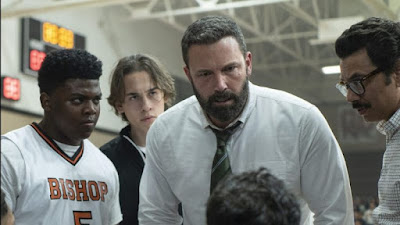 You’ve probably heard that “The Way Back” is a sports movie, but that’s not really the best description. Certainly basketball is at the heart of the story, but that’s not what it’s about.

The meat of it is a tale of redemption, in which Ben Affleck plays a miserable drunk at the end of his string asked to return to the Catholic high school where he was a legend a quarter-century ago and take over as coach of the misfit team.

We’ve seen this sort of sports movie before: at first, the team is miserable and clash with their new coach. But they gradually start to put their doubts and acrimony aside, and start winning games. This all leads to the Big Game at the end.

It’s a story arc that’s been around forever, perfected by “Hoosiers,” replayed countless times since.

But as I say, Affleck, director Gavin O’Connor (“Miracle”) and screenwriter Brad Ingelsby really do focus on the coach, Jack Cunningham, more than the team. Jack works a mind-numbing construction job during the day and drinks himself into a stupor at the same crappy bar every night.

He’s still the same guy after taking up the coaching job, but it leaves less time for drinking, so he drinks less, and finds he’s a little better. He’s able to open up a little more with his sister and his ex-wife, and face the tragedy that weighs so hard on his life.

Even the “back” that he gets to probably isn’t going to be what you think it is.

There is plenty of basketball action and we do focus for a little while on one or two of the kids. Brandon (Brandon Wilson) is the quiet point guard who needs to step up and be more vocal. Chubbs (Charles Lott Jr.) is the heart of the team who cracks them up with his antics. Marcus (Melvin Gregg) is the most talented player but also a major head case.

This is one of Affleck’s best performances. There’s no young man’s pride here: he’s playing a middle-aged guy without much to show for his life sliding down a dark path. We see his self-hate, but also the drowned proud that lies underneath all that blackness, waiting for a chance to rise again toward the light.

Plus, the sports action is quite good.

Bonus features are a mite slim. There are only two making-of documentary shorts: “The Way Back: This Sporting Life” and “Every Loss Is Another Fight: The Road to Redemption.”