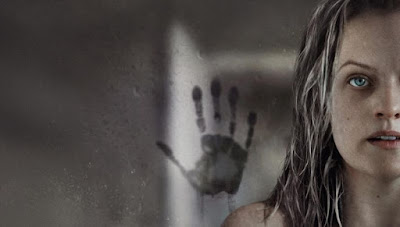 A lot of remakes of old movies say they’re “putting a twist on an old tale,” but in the case of “The Invisible Man” this is legitimately true.

Start with the fact that the titular character is not the center of the story, and in fact is a tertiary character. The real protagonist is Cecilia (Elisabeth Moss), the kept girlfriend of Adrian (Oliver Jackson-Cohen), a young optics technology tycoon. As the story opens she is fleeing from his beachside mansion because their relationship has grown abusive.

Curiously, writer/director Leigh Whannell never depicts any of Cee’s life prior to the split, so we’re left to guess at the nature of their dysfunction. Mostly it appears to have taken place on a psychological level, as Adrian tried to control every aspect of her life.

She hides out with the help of her sister, Emily (Harriet Dyer), and police detective friend, James (Aldis Hodge) and his preteen daughter Sydney (Storm Reid). Cee is shocked when Adrian soon commits suicide, and even more surprised when his brother, Tom (Michael Dorman), reveals that he has left her $5 million in installments.

But, as they say, strange things start to happen. Invisible forces begin to move objects around, and gradually grow more invasive and hostile. Cee is convinced it’s Adrian, who has somehow made himself invisible to torment her. Of course, no one believes her, and much of the film’s energy is spent probing the question of whether the harassment is real or all in her mind.

As is often the case with modern horror films, or horror-adjacent ones like this, “The Invisible Man” could have benefited from some judicious editing. At 124 minutes, it drags a bit here and there. I got a bit tired of repeated scenes of Cecilia wandering around the house, looking at empty open doorways, etc. Instead of building tension, the sprawling nature of these sequences drained it away.

Moss gives her usual solid performance, though I’ve always found her somewhat emotionally remote as a performer. She’s a very good actress, but in a very self-conscious way -- “Wow, what great acting!” The roles disappear into her, not the other way around.

Still, “The Invisible Man” succeeds as a genuinely creepy film that stands an ancient tale on its head with a modern #MeToo framing.

Bonus features include a feature commentary track with Whannell, deleted scenes and the following documentary shorts: