Review: "The Vast of Night" 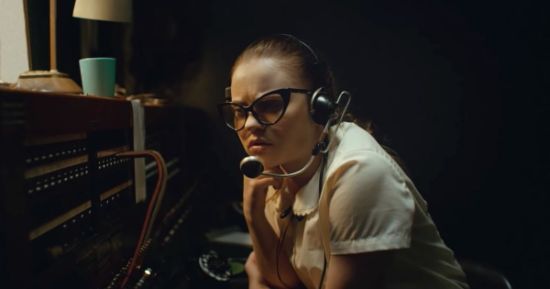 "The Vast of Night" is a weird, moody, slow-moving but often mesmerizing science fiction thriller. Made for a tiny budget with unknown actors, it's an ambitious piece of work by director Andrew Patterson and screenwriters Craig W. Sanger and James Montague, all of them making their feature film debut.

I got the same sort of feeling watching this movie as I did after seeing Trey Edward Shults' debut film, "Krisha" -- clearly, these people are going places.

Everett doesn't seem much older than high school age himself, but with his geeky swagger, perpetually dangling cigarette and sharp patter on the air, it seems clear he's not long for Cayuga. California's where they're doing cool stuff on the radio, so that's where Everett is aiming.

Fay is just as smart as he, but is more embedded into the roots and rhythms of the city. You see her going on to be the head librarian or the first woman city council member or something. She has just bought her own tape recorder and starts out the story following Everett around like a fangirl, looking for tips and maybe open to a little flirting.

With her pulled-back crimson hair, huge slanted glasses and saddle shoes, Fay is very much the picture of a mid-century brainy girl.

Things start to get weird when Fay encounters a weird noise during a phone call -- this being the day when everything went through an operator working a switchboard, sticking and swapping big plugs into an impressive array of jacks, one for each phone in town. Later a woman calls reporting mysterious sights and sounds in the sky before she's cut off.

She gets the noise to Everett who puts it on the air, eliciting a phone call from Billy (voice of Bruce Davis). He's an old black man who spins a tale of the Army sending him and a bunch of others to a strange place long ago to build a mysterious facility where he often heard sounds like that. Now he and many of the other soldiers are sick.

This radio conversation leads to another caller, Mabel Blanche (Gail Cronauer), who insists Billy come to her house and hear her tale. As a young woman who bore a son out of wedlock, she was shunned by the townsfolk and was astonished to discover her baby son speaking in a strange tongue -- much like the woman on the air.

The mystery deepens from there. Are the Russians about to attack? Is it little green men from outer space? Is anybody else going to emerge to help unspin this tale?

Two things that work strongly in the movie's favor are the music (by Erick Alexander and Jared Bulmer) and the cinematography (by M.I. Littin-Menz). The screen will sometimes go to all black for several minutes at a time, and we're carried along by the voices and the music score. Or it will transition to a 1950s-style television image, monochrome and squarish with curved edges

The camera will also go off on trips of its own, spiraling through long journeys across town, through the gym where the game is still going on, out the window and then on again until we rejoin Everett and Fay. It's really arresting imagery, and some of it I genuinely scratched my head in wonder at how they achieved it.

The film also has a very authentic period look with vintage cars, costumes and set decoration. Aspiring filmmakers should take a look at this movie for points in how to achieve a terrific, polished look without a lot of resources.

Story-wise there's not a lot of depth to "The Vast of Night" -- it very much relies on the sharp performances, haunting visuals and disturbing tone to gradually stir up feelings of fear and elation. But it's an extremely watchable flick that combines old-school nostalgia with impressive storytelling technique.

Posted by Christopher Lloyd at 12:51 PM