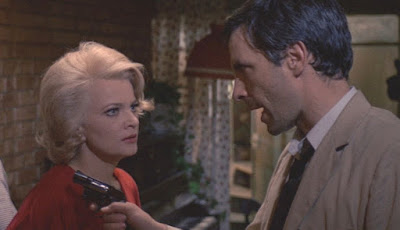 "Machine Gun McCain" is an interesting, though rather nasty, emblem of its time.

It's an Italian mob picture shot to seem like an American one set in Las Vegas and Los Angeles, with a few scenic layovers in San Fran. It stars John Cassavetes as the titular figure, a seasoned criminal who has just been released from prison after 12 years to take part in a casino heist. He spends most of the movie furiously treating everyone like crap, including his own son and every woman he encounters, resulting in one of the most hard-bitten screen antiheroes of this era.

Imagine Clint Eastwood's Man With No Name mixed up with Charles Bronson's Paul Kersey from the "Death Wish" franchise, along with a heavy dollop of film noir misogyny, and that's Hank McCain. I think by the end of the movie I was actually rooting for the mafia guys to give it to him.

Cassavetes reportedly didn't think much of the script or director, Giuliano Montaldo, and only took the gig to help finance his own filmmaking efforts.

Such was his way, trading studio paychecks for the ability to finance his tiny-budget film projects that he would often edit in his own house. Today he's considered the forefather of American independent cinema, to the point the Independent Spirit Awards gives one in his name for films made for less than a half-million dollars.

His frequent onscreen muse, collaborator and wife, Gena Rowlands, turns up very late in "McCain" and only then does it briefly come alive. Playing McCain's former partner in crime and lover, Rosemary Scott, it's as if this movie suddenly wanders into Orson Welles' "Lady from Shanghai," with Rowlands taking on notes from Rita Hayworth's blonde, doomed woman of mystery, Elsa "Rosalie" Bannister.

At this point, McCain is on the run with nearly $2 million he has robbed from the mob's Royal casino, and has with him his quickie young bride Irene, played by Britt Ekland. He turns to Rosie for help, and she gives it to him, with the full knowledge that the gangsters will eventually catch up with him, and herself.

When they do so she gives a defiant speech about how people like her and McCain are different from everybody else, and then shows them why.

McCain's relationship with Irene isn't so much mysterious as baffling. On the day he gets out of prison after a $25,000 bribe for early parole arranged by his son, Jack (Pierluigi Aprà), he declines the services of the prostitutes supplied to him and heads out to a bar. There he spots Irene being mashed upon by two oily businessmen, and after violently dispatching them he leads her to her car and explains his situation and states simply, "I need someone."

He keeps here around, mostly because Irene is so completely pliant to his demands and whims. Eventually he recruits her as his ally in the heist, including a quickie Vegas chapel marriage that feels like a down-payment. It seems clear McCain isn't capable of true, selfless love. Women are a necessary but disposable commodity for his basic, brutish needs.

It might be interesting to follow McCain around some more and learn how he became such a mercenary, both personally and professionally. Unfortunately the screenplay by Mino Roli, based "freely" on the novel "Candyleg" by Ovid Demaris with dialogue by Israel Horovitz, seems more interested in the mob bosses than the title character.

Much of the middle of the movie follows their various contretemps and antagonisms, to little effect. Peter Falk plays Charlie Adamo, the ambitious young boss of the Western states who wants to muscle in on the Vegas scene, not realizing the top dons already own the Royal. It's he who's bankrolling McCain's kid, hoping to use Hank's experience to knock over the casino for reasons that are unclear.

McCain, who claims to have only met his son twice in his life and has absolutely no regard for him, immediately skips off with the front money Adamo supplied and makes plans to rob the Royal himself, alone. He employs a clever ruse by setting off bombs around Vegas to attract the fire department, then more explosions inside the Casino to evacuate it, whereupon he arrives dressed as a fire marshal to blow open the safe.

Meanwhile, Don Francesco DeMarco (Gabriele Ferzetti) heads in from New York to put Adamo in his place, and decides he likes it out west. DeMarco is like a smooth, aging soap opera idol, speaking in calm, dulcet tones while sweeping his scant remaining hair into a semblance of a widow's peak. There's even a suggestion that Adamo's wife, Joni (Florinda Bolkan), had been carrying on an affair with him. It's she who passes on info about the heist that ends up dooming both Adamo and McCain.

The movie is filled with various other Italian actors who seem chosen entirely for their looks, such as a pair of long-ish haired goons watching over Jack who are implied to be a gay couple, or model-turned-actor Tony Kendall as the mob bosses' top assassin, who kills without ever getting a hair out of place.

McCain himself is deliberately flat and neutral, wearing the same shapeless tan suit for most of the movie, his face largely expressionless. Small in stature, Cassavetes nonetheless manages to project the idea that McCain is always he biggest man in every room, treating everyone as if they're a step slower than he. He tells his son, Jack, that he was stupid to bail him out of prison, insisting "I wouldn't spend 25 cents on you."

Interestingly, while the movie is posited as "one lone hardcase versus the mob," McCain never actually meets any of the mafioso face-to-face. I suppose that would work if it was just his story, and the mob was this faceless entity hunting him.

But by spending so much time around tuxedoed dons, we wind up finding them more compelling figures.

Posted by Christopher Lloyd at 9:59 AM