Review: "The Mitchells vs. the Machines" 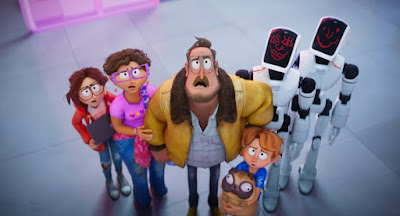 “The Mitchells vs. the Machines” is a pretty curious animal: a slick-looking CGI movie from a major animation studio (Sony) playing on the biggest streaming service (Netflix) that’s all about how people are letting technology interfere with their interpersonal relationships. It takes shots at Facebook, Apple, YouTube, Google and all the other big digital players.

This is pretty bold stuff. It’s like the Woman's Christian Temperance Union deciding to serve gin martinis at their next meeting to juice up attendance.

At one point the titular family is sitting around the dinner table and everybody’s nose is in their phone. (Chances are at least one of them is watching Netflix.) Dad has to beg them to make eye contact for 10 seconds before the strain does them in. Later they take on a literal army of evil robots let loose by our own increasing reliance on technological crutches… like the very ones you’ll probably use to watch this movie.

Rather than shy away from the cognitive dissonance, director Mike Rianda and co-screenwriter Jeff Rowe gleefully embrace the crazy in a freewheeling, fast-paced story full of action, sharp wit and not a little pathos. It’s the best animated flick I’ve seen since “Wolfwalkers.”

The setup is that teen heroine Katie Mitchell (voice of Abbi Jacobson) is a queen of geek culture and an aspiring filmmaker. She has a popular YouTube channel for her shorts, a series starring the family’s barely-there pug, Monchi, as Cop Dog. She uses a mix of live action, filters and animation -- a style the movie mimics, so characters will have little emoticons pop over their heads and whatnot.

She’s jacked to move away to California to start film school and connect with her tribe of fellow weirdos. But there’s also the usual teen disconnect with her family, especially with her well-meaning but clueless dad, Rick (Danny McBride). He’s a technophobe who doesn’t understand Katie’s tools and wants her to have a backup in case filmmaking doesn’t work out. Recalling their close bond when she was little, Rick is hurt that Katie seems so eager to cut the ties that bind.

Her mom, Linda (Maya Rudolph), is a first-grade teacher and domestic goddess, handling the daily chaos and gently pushing Rick to reach out and connect. Younger brother Aaron (voiced by Rianda himself) is anxious and dinosaur-obsessed, and is worried about losing his closest (read: only) friend when Katie moves away.

Rick comes up with the (not so) brilliant idea of a cross-country road trip to reconnect, but it only seems to push them further away. The action sets in when the PAL mega-corporation, led by the callow young tech billionaire Mark “Totally Not Zuckerberg” Bowman (Eric Andre) introduces the next big technological leap: personal assistant robots to not just control all your communications and interactions, but make you breakfast and clean up the house while doing it.

Unfortunately, the old PAL operating system (Olivia Colman), represented as a emotive face within a phone, is none too pleased about being displaced, and soon takes over the system. Humans across the globe are scooped and placed into glowing blue pods to be shot off into the cold, dark reaches of unknown space -- but hey, we’ll still have Wifi!

With the help of a pair of captured robots who have incurred damage that renders them more human-like, the Mitchells set out to upload a backdoor shutdown program into the mainframe, dodging legions of enemies and multitudinous explosions. Their only weapons are Katie’s canny brain, Rick’s old-school crafty brain, and a can of whup-tush that gets unleashed by the unlikeliest member of the clan.

There’s lots of zany action to please kids as well as a few gross moments to draw titters. I was more lured toward the clever throwaway jokes, various side characters offering social commentary and surprisingly heartfelt rumination about the challenges of maintaining a father-daughter bond.

I’d prefer to watch a fun spectacle like “The Mitchells vs. the Machines” in a movie theater, but in this age of isolation we have to watch where and whenever we can. It’s still astounding that a movie that makes use of the technology it mocks could result in such a delightfully human story.