Review: "In the Earth" 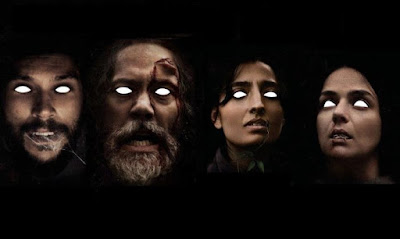 "In the Earth" reminds me of old 1970s-era horror films like "The Wicker Man" or "Soylent Green" -- loopy, sensuous, a bit satirical, a tad psychedelic, more unnerving than blood-soaked gorefest. It's the sort of movie, deliberate and slow-paced, that seeps its way into your skin and makes you feel unwell (in a good way) having watched it.

It also skillfully taps into our current anxiety and fears surrounding pandemic, with its backdrop of a mysterious virus that has plunged the Earth into a panic. Interestingly, writer/director Ben Wheatley ("Rebeca") doesn't show us any of that broad scope, just the smaller microcosm of scientists working in the remote forest on a potential cure.

The movie gets a little too fixated on hallucinatory sequences in the last act, with characters blitzed out on mushroom spore clouds while kaleidoscopic imagery flashes and twists onscreen for minutes at a time. It looks like a lava lamp stuck in a blender backlit by neon.

But it genuinely intrigued and scared me, and that ain't easy to do.

Joel Fry plays Martin, a young scientist arriving in the countryside to help tackle the unnamed virus. It isn't COVID per se, but people wear masks around each other and take similar precautions. Newcomers get spritzed down in disinfectant from a sprayer that's the same thing you use with Weed B-Gon.

Tall, gangly and unsure of himself, Martin doesn't exactly seem like the sort of guy who's going to be a horror movie hero. He's come to work with Olivia Wendle (Hayley Squires), a former colleague and mentor who seems to be ahead of everyone else on beating the virus. But she's far off in the woods where there's no cellphone signal, so her only contact has been by leaving written communiques that have recently tapered off.

("Satellite phone?" asks I, the eternal literalist and plothole-sniffer.)

He's assigned a ranger to be his guide. Alma (Ellora Torchia) is everything he's not: confident, experienced, someone who looks you in the eye and asks sensible questions, whereas Martin is an inveterate shoe-starer and mouth-mumbler.

(Honestly, he's kind of a drip, and by the midway point Alma has clearly shouldered past him into the lead position.)

Off they go on foot into the dense forest, which is also haunted by the legend of Parnag Fegg. It's unclear if this is supposed to be a specific witch-like figure or an ancient druidic cult singing to the trees while slicing open animal intestines. But it doesn't exactly bolster confidence. There are also tales of recent disappearances, and they happen across an abandoned campsite with a child's toys.

One night they are surprised and beaten by some unseen assailant, waking up to find their shoes and Martin's equipment stolen. He soon lacerates his foot badly on something -- pay attention to the film's opening moments and remember -- and their quest seems cursed.

Then they run into a quiet, kindly man named Zach (Reese Shearsmith). Sporting long graying hair and big, intelligent eyes, he appears to be a peaceful hippie checked out of society. His biggest fear is that Alma will report him and the rangers will make him leave his home, which is basically just a haphazard assemblage of tarps and poles. There he gives them food, clothing and sweet-tasting drinks made from various flower petals.

It soon becomes clear there's more to Zach than moonwater and good vibes. He has some curious ideas about communing with nature, seeing it as the opposite and adversary of the civilization that produced the virus.

Eventually they do make it to the camp of Dr. Wendle, which at first seems like a respite but is in some ways even weirder than Zach's place. She has lots of computers and other expensive equipment, and has set up strobe lights in the woods and a network of speakers to churn out haunting natural sounds she's recorded and amplified.

Trees actually make noise as they grow if you listen carefully enough, she insists as way of explaining her little nightly concertos.

I can't say much more without giving things away. Suffice it to say that Alma and Martin are our avatars as they stumble into an increasingly deeper thicket of the mind. There will be altered states, conflict, strange photography sessions and not a little blood. A good test is if you liked "The Blair Witch Project," you'll probably hearken to this, too.

"In the Earth" is a strange but enjoyable film, if you're into things like not always being exactly sure of what's going on, who's doing what, or how, or why. It's the sort of thing you have to just sit back and let the movie's mood grow over you like aggressive plants, not worrying if that's good or bad.

Posted by Christopher Lloyd at 11:25 AM