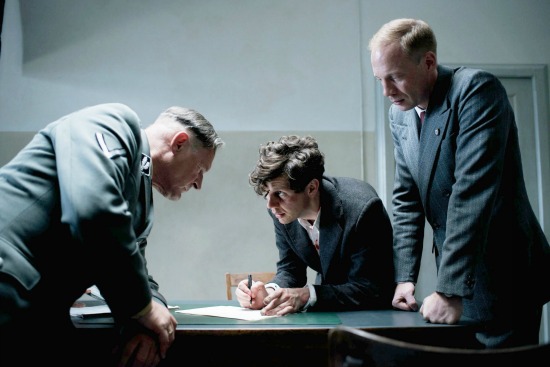 Most people are aware of the assassination attempt on Adolf Hitler by some German officers in the waning days of World War II. It's been chronicled many times, including "Valkyrie" starring Tom Cruise. But few, including myself, are familiar with the attempt to kill Hitler in 1939 by a solitary German man who saw the coming apocalypse and tried to head it off.

"13 Minutes" is a compelling drama that portrays the life and actions of Georg Esler, who set off a bomb in the Bürgerbräukeller, where Hitler and his Nazi mob initiated the Beer Hall Putsch in 1923, and where the Fuhrer was scheduled to give an anniversary speech 16 years later. The explosion went exactly according to Esler's plans, bringing down the roof, killing eight and wounding dozens of others. But Hitler had wrapped up his speech and departed 13 minutes earlier than expected.

Director Oliver Hirschbiegel, who also directed the well-known "Downfall" portraying the final days of Hitler, and screenwriters Léonie-Claire Breinersdorfer and Fred Breinersdorfer take a big-picture view that goes far beyond the actual bombing and aftermath.

Well played by Christian Friede, Georg is depicted as an earnest, passionate artist who loved his country and his fiancee, Elsa (Katharina Schüttler). Using his interrogation and torture after the bombing as a framing device, we look back on his life from 1932 forward, as the Nazi regime gradually asserted its yoke even in his remote village.

We watch as the friendly barkeep adopts the uniform and demeanor of the brownshirts, and soon the entire town is awash in swastikas. Sweet young children taunt Jews, Christians and foreigners. As religious people, Georg and his family are tolerated but resented.

For a time Georg is content to look the other way, dealing with family issues -- his drunkard father is constantly in danger of losing the farm -- and his burgeoning romance to Elsa, who is married to an abusive lout (Rüdiger Klink). He works as a carpenter, plays the accordion at the local beer hall, and dallies with friends who are members of the Red Front communist party (though he himself never joins).

In the 1939 setting, Georg is subjected to all sorts of physical and emotional torture, including truth serums and hypnosis, in order to say that he was the pawn of collaborators or foreigners. He initially refuses to say a word, humming a pastoral tune in response to all their questions. But when the Nazis round him Georg's family and Elsa, with the clear threat that they will suffer the same fate as him, he finally relents and confesses.

The problem is, Hitler and his minions don't want to believe that a single man working in isolation could have come so close to killing him and dashing the fated triumph of the Third Reich. So the torture goes on, the interrogations continue, and his truth is dismissed as lies -- even after Georg draws detailed sketches of his plans and the triggering device he built from scratch.

Burghart Klaußner plays Arthur Nebe, the police chief charged with conducting the investigation. He's a true believer and wants to do his duty, but is hounded by Heinrich Müller (Johann von Bülow), the infamous Gestapo chief, to make the truth their superiors want.

Illuminating a little-known piece of history, "13 Minutes" shows us the humanity behind the figures in our history books.

Posted by Christopher Lloyd at 10:50 AM