Review: "Valerian and the City of a Thousand Planets" 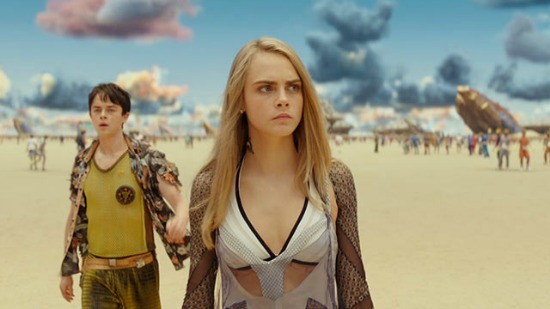 "Valerian and the City of a Thousand Planets" is a very creative movie, but it's a shallow sort of creativity.

Based on the comics by  Pierre Christin and Jean-Claude Mézières, "Valerian" is kind of a goofy James Bond-in-space adventure with tons of aliens and CGI. Written and directed by Luc Besson, it makes his "The Fifth Element" look like a hard and gritty drama.

Government agents Major Valerian (Dane DeHaan) and his partner and hoped-to-be lover, Sergeant Laureline (Cara Delevingne), traipse through the galaxy getting into and out of all sorts of scrapes. The plot is barely comprehensible -- not that it's really meant to be -- having to do with a refugee race of aliens, a critter MacGuffin and the prerequisite sneering villain.

The tone is overtly comic book, and the expensive digital imagery ($180 million, I hear tell) has a deliberately cartoony look. I never quite knew how I was supposed to take the movie, or its characters. Certainly, we never feel any kind of connection to them. They're like our avatars in a video game that can't control all that well.

I'm not sure about the casting of the two leads. DeHaan, with his tired eyes and spindly frame, certainly doesn't look the part of an action movie hero. I'm actually OK with that: not every male body we see onscreen needs to have a six-pack and cannonball biceps. DeHaan plays Valerian as a smirking playboy who thinks he's finally found true love in Laureline, and tries to live up to that.

Delevingne brings some kick-ass authority to her role, a duty-bound soldier who's also able to look past the rule book when it doesn't fit circumstances. She continually puts off Valerian's advances, but the way she glances at him when he walks away tell us she secretly wants it to go on.

Things center around Alpha Station, a former Earth orbit platform that grew and grew as humans encountered more alien species and incorporated them into their galactic government. Eventually it got so big its gravitational pull threatened Earth's, so Alpha has traveled millions of miles over the last 400 years, and is home to multitudes.

The creature effects are quite impressive. Some, like those from planet Mül, look like stretched-out humans with translucent skin and no hair. Other aliens resemble the ogres from the "Lord of the Rings" movies, or butterflies, or sea slugs. Some are even liquid or gaseous, contained within space suit for interaction with humanoids, and others are living machines.

Combined with the wonders of Alpha and beyond, there's no denying "Valerian" is a feast for the eyes.

In one neat sequence, we enter a marketplace that exists in another dimension, so visitors don special eyewear to interact with the peddlers. Valerian sticks a laser pistol and his hand into a special gizmo, so he can shoot at bad guys while the rest of him remains phased in safety.

The adventure, though, soon grows tiresome as it seems there are no consequences to be encountered. For every obstacle or enemy, there's some kooky solution involving cool technology or interaction with a bizarre creature.

For instance, when Laureline needs to track down the lost Valerian, she seeks out a jellyfish that she has to, uh... interface with in an interesting way to learn his location. When roles are reversed, Valerian recruits a "glamopod" named Bubble who can transform her appearance. She's played by Rihanna, who does a very sexy and athletic burlesque routine as her introduction.

When she has to do dialogue, though... ugh. Rihanna can certainly perform, but she can't act.

Others rounding out the cast are Herbie Hancock (!) as the intergalactic minister calling the shots, Clive Owen as the local commander with a history, Sam Spruell as his upright number two, and Ethan Hawke as a cowboy pimp.

I had fun for awhile watching "Valerian and the City of a Thousand Planets," but it grows tiresome, like a circus show that runs too long. There's only so much bedazzlement the eye can take in before becoming strained.

We jump from dizzying scene to scene like we're progressing through a role-playing video game, and waiting at the end is a prize we don't really want that badly.

Posted by Christopher Lloyd at 10:46 AM